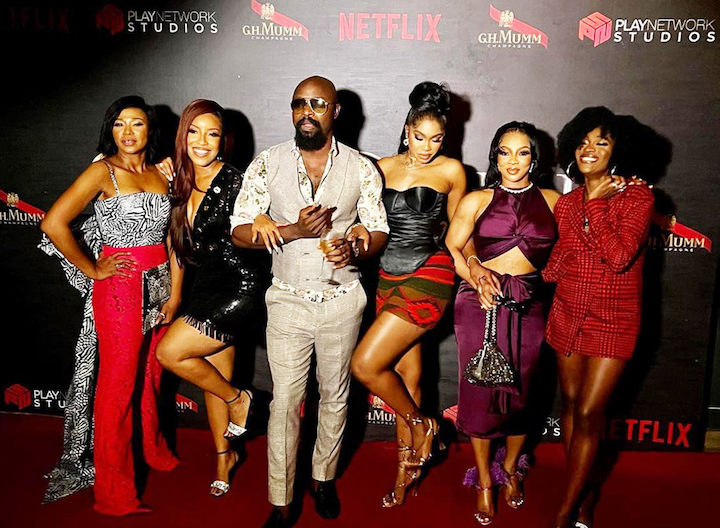 After a long wait, Glamour Girls – a remake of the 1994 film with the same title – finally debuted on Netflix this week. The film has been remade with a lot of posh to suit the viewing pleasure of viewers while sticking partially to the storyline of the original film. The film is written by Kemi Adesoye, directed by Bunmi Ajakaiye, and produced by Abimbola Craig for Play Network Studios production.

This modern-day remake of the classic Nollywood film focuses on the story of four girls who are desperately trying to make a living to live large in the big city of Lagos. Within the usually patriarchal African community, they all dare to raise a stir with their professions as high-end escorts.

“The world of high-end escort promises glamour, wealth and the chance of reinvention for a group of women — till a killing and theft threaten it all”, the synopsis reads.

They are called the Glamour Girls, and the reason for this is their ability to present a life of Glamour as a front while going around pretending to sleep with men and vacationing on Islands and beaches. The Netflix movie tells the story of how these girls try to hold it all together while deceiving men and relieving them of their valuables.

Sharon Ooja and Toke Makinwa in a sneak peek give a little more insight into their characters as Emmanuela and Louise.

“Growing up it was one of the films that I watched, and it was such a classic, such a beautiful story. It’s just amazing that now I’m older, I’m an actor, and I get to play one of the leads… this opportunity to work with Play Network and work on a movie that I really, really loved growing up was just amazing,” said Sharon Ooja.

“I’m supper excited because a film of this magnitude, I mean it’s been done before, and it had Nollywood legends that went on to shape the era of Nollywood we are enjoying now… I’m super excited that this is going to be such an epic movie.”