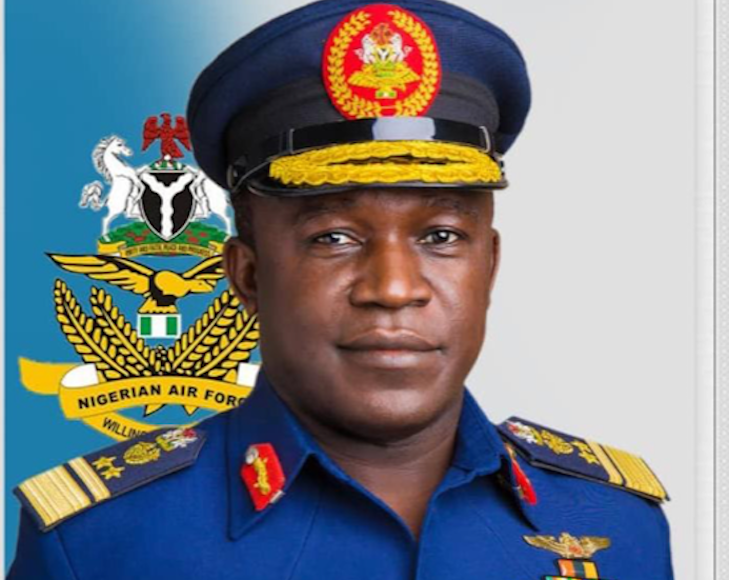 Air Marshal Isiaka Oladayo Amao is the 21st Chief of Air Staff. He has, over the years, served in critical sectors in the military which has enabled him to contribute significantly to the development of the Nigerian Air Force whilst acquiring a unique perspective and insight that has shaped his strategic thoughts. Upon assumption of office on January 26, 2021, Chiemelie Ezeobi reports that his focus has been on doctrinal development and application of airpower in joint military operations, purposeful training and human capacity development as well as platforms and equipment serviceability through innovative maintenance methods and logistics support systems

Until his appointment as the 21st Chief of the Air Staff (CAS) by President Muhammadu Buhari on January 26, 2021, Air Marshal Amao was the Commandant of the Armed Forces Resettlement Centre (NAFRC), Oshodi, a key institution tasked with the responsibility of training and empowering military personnel for post-service re-integration into the civil society.

Vision
Bearing in mind the current security environment as well as the mission of the Nigerian Air Force (NAF), “To ensure the integrity of the airspace by gaining and maintaining control of the air while retaining a credible capacity to fulfill other airpower tasks demanded by national defence and security imperatives,” Air Marshal Oladayo Amao coined his vision for the NAF which seeks, “To enhance and sustain critical airpower capabilities required for joint force employment in pursuit of national security imperatives”.

To give bite to his vision, the NAF Director of Public  Relations (DOPRI), Air Commodore Edward Gabkwet, noted that the CAS fashioned out five main key drivers which laid emphasis on doctrinal development and application of airpower in joint military operations, purposeful training and human capacity development as well as platforms and equipment serviceability through innovative maintenance methods and logistics support systems.
Other areas of emphasis include ensuring a disciplined workforce essential for combat readiness and bolstering troop morale by improving personnel welfare.

Thus, upon assumption of office, Air Marshal Amao had assured Nigerians that under his watch, the NAF alongside the sister services would redouble its effort at providing the support and security necessary for the nation’s development, whilst discharging its constitutional responsibilities to the government and law-abiding citizens.
Also, one of his key derivatives was that NAF under his leadership would leverage credible partnerships while focusing on enhancing professionalism so as to promote performance and motivate initiatives that would create an enabling environment for successful operations.

Over time, not only has he focused on such collaborations, he also capitalised on critically applying the principles of war, personnel motivation and inter-service cooperation, which is a time-tested doctrine capable of bringing the Armed Forces of Nigeria (AFN) closer to achieving the core mandate of securing the nation.
In terms of fighting insurgency and terrorism, the CAS through the NAF has sustained some gains. Besides supporting joint operations, the NAF has also conducted independent operations to destroy insurgents’ capabilities.

In March 2022 for instance, aerial operations by the NAF Component of Operation Thunder Strike and Operation Gama Aiki eliminated over 150 terrorists who had been under surveillance for some time and were observed to be in three different groups of approximately 40 terrorists, with at least 25 motorcycles per group.

However, rather than strike individual group separately, the NAF surveillance team patiently waited until the three groups gathered at a crossroad location near Ghana Village. According to the Niger State Commissioner for Local Government, Community Development, Chieftaincy Affairs and Internal Security, Emmanuel Umar, many commanders of the terrorist groups were killed in the operations, pointing out that the eliminated terrorists belonged to the camps of Ali Kawajo, Yello Janbros, Kachalla Halilu and Bello Turji. Similar successes have also been recorded in Operational theatres in the North-east, North-west and Southern parts of the Country.

All these wouldn’t have been possible without adequate platforms enabled by the magnanimity of the President Muhammadu Buhari-led administration, which ensured that the NAF under Air Marshal Amao acquired new platforms while reactivating existing ones.
According to Air Commodore Gabkwet, under Air Marshal Amao, the NAF has witnessed a tremendous boost to its aircraft holdings across various fleets. In addition to the previously acquired platforms, the NAF has, in 2021 alone, taken delivery of 15 brand new aircraft and Unmanned Combat Aerial Vehicles (UCAV) and have sustained reactivation of hitherto unserviceable platforms to upscale its capabilities in tackling all forms of criminality.
The latest additions of three JF-17 Thunder multi-role fighter aircraft and 12 A-29 Super Tucano aircraft recently inducted into the NAF Order of Battle are presently deployed in various theatres of operation across the country to add impetus to the ongoing war against insurgency, armed banditry and other forms of criminality in the country.
A champion of human capital, Air Marshal Amao also ensured the NAF Special Forces elements were reinvigorated and further given advanced training both at home and abroad.
The NAF has also boosted the capacity of its Regiment and Special Forces with additional training and equipment to improve operations in the fight against insurgency and other forms of criminality.

In the last 15 months, the service has also enhanced its recruitment drive by graduating over additional 2,500 recruits at the Military Training Centre in Kaduna, just as it sent 10 Senior Non-Commissioned Officers of the ranks of Air Warrant Officer and Master Warrant Officer to the United Kingdom for a unique four-part international pre-retirement training.
Meanwhile, in the past 15 months, NAF has winged 56 pilots and operators who graduated from various pilot courses both at home and abroad. In the same vein, several officers, airmen and airwomen of the NAF are currently undergoing different types of training in various countries including the United States of America, South Africa, India, Belgium, Egypt and Pakistan, amongst others.

A firm believer in welfare of officers and men, the CAS has gone out of his way to boost the morale of personnel by ensuring that they are well taken care of, accomodation-wise, as well as schools attended by their children.

Also, to enable NAF personnel and those outside the service the opportunity to channel their complaints and grievances against the service or its personnel, the CAS during the year established the Office of the Ombudsman and the Directorate of Veterans Affairs (DVA).
Meanwhile, in its bid to reduce the huge foreign exchange expended on medical tourism, the NAF leadership approved the setting up a NAF Telemedicine portal to bridge the geographical barriers between patient and healthcare provider to access efficient and affordable healthcare services without being physically involved.

Given the invaluable role of Research and Development, the CAS has invested substantially in R&D to develop unprecedented capacity to surmount current and emerging security challenges while also enhancing its operational viability.

CAS has also placed premium on key infrastructural development for all NAF bases, as well as units and commands, inadvertently boosting morale of troops.

In all, Air Marshal Amao in tandem in with his vision and mission for the NAF is on course to ensure holistic fire power for the Nigerian Air Force while ensuring no doctrine or key derivative is left undone.

Born and brought up in Enugu State on September 14, 1965, Air Marshal Isiaka Oladayo Amao, is an indigene of Oshogbo Local Government Area in Osun State, who moved home with his parents and then to Kaduna where he attended his early childhood education at Nuhu Bamalli Primary School in Zaria, Kaduna from 1971 to 1977. Afterwards, he attended Command Secondary School Kakuri from 1977 to 1982.

After he finished his secondary school he was enlisted into the Nigerian Defence Academy (NDA) as a member of the 35 NDA Regular Course in the Nigerian Air Force cadet on January 19, 1984 and was commissioned as Pilot Officer on December 20, 1986.

Academics
Amao also attended the Federal College of Freshwater and Fisheries Technology (FCFFT) New Bussa from 1994 to 1996; the University of Madras India from 2002 to 2003; Kaduna Polytechnic from 2005 to 2006; and PLA National Defence University, China from 2012 to 2013.

Operations
Amao held several positions in the NAF and prior to his appointment, was the Air Component Commander of the operation against the Nigerian insurgents that was tagged Zaman Lafiya Dole / Lafiya Dole in North-east Nigeria and was also the Air Officer Commanding Tactical Air Command (TAC).Operationally, as a seasoned Fighter Instructor Pilot on the Alpha Jet, Air Marshal Amao served as a Squadron Pilot at the 99 (now 407) Air Combat Training Group Kainji and the 75 (now 103) Strike Group Yola.
He subsequently worked as an Instructor Pilot at both the 301 (now 401) Flying Training School Kaduna and the 303 (now 403) Flying Training School Kano, with over 1,500 Jet and Instructional hours to his credit.

He has participated in the draw-down of the Africa-led International Support Mission to Mali (AFISMA), as well as the counter-insurgency Operations Zaman Lafiya and Lafia Dole in the North East of Nigeria.

He went on to become Air Component Commander for both operations also serving as Deputy Theatre Commander for the latter. In these roles, he oversaw synergistic employment of Air Power to effectively support land forces in sustaining stabilisation operations across the North-east Theatre.

He then rose to the position of Air Officer Commanding, Tactical Air Command, the lead combat element (often referred to as the “teeth”) of the NAF.

Air Marshal Amao was privileged to serve in critical capacities which enabled him to contribute significantly to development of the service whilst acquiring unique perspectives and insights which have shaped his strategic thoughts.

With keen possession of understanding of international relations as they affect defence matters, Air Marshal Amao also served as Deputy Defence Adviser and Acting Defence Adviser at the Nigerian High Commission in London, United Kingdom, Chief of Training and Operations and subsequently Chief of Policy and Plans at Headquarters Nigerian Air Force.

He is also a certified aircraft accident investigator trained in Karachi, Pakistan and at the Nigerian College of Aviation Technology, Zaria Nigeria as well as being a Qualified Flying Instructing (QFI).

Hobbies
For one whose job is quite tasking, Amao takes off the steam in his spare time by reading, dancing, travelling, playing volleyball and golf as well as fishing and farming. He also finds time for family life, a home he shares with his wife, life
Mrs. Elizabeth Olubunmi Amao and their three sons.