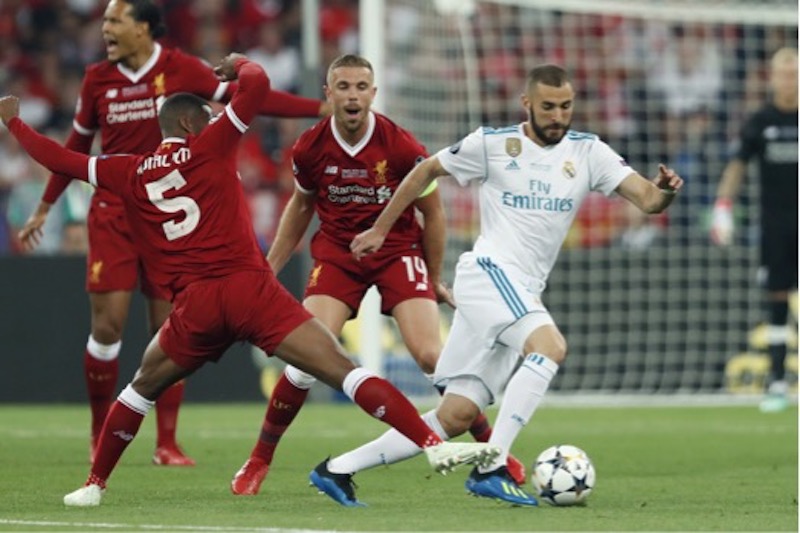 Two of the most decorated clubs in European football history-Real Madrid and Liverpool, will today go head-to-head at the Stade de France Stadium in Paris. It is expected to be one hell of a spectacle, with so much talent on show and two fantastic coaches in the dugout, but the English side seems to have the edge-at least on paper

Forty-one years on from their inaugural battle in the beautiful city of Paris, Liverpool and Real Madrid reconvene just north of the French capital, Saint-Denis for the 2021-22 Champions League final today.

The Reds have a seventh title in Europe’s primary competition in their sights today, while continental veterans Los Blancos are aiming to get their hands on the trophy for a record-extending 14th time.

Inter Milan, Benfica and Villarreal have been sent packing by Jurgen Klopp’s side en route to the Stade de France, while Carlo Ancelotti’s men have dumped out a trio of heavyweights in Chelsea, Paris Saint-Germain and Manchester City.

While Man City were busy being rocked to the core by Aston Villa and Steven Gerrard – hoping to help his former club achieve something that he never did during his days in the red jersey – a plucky Wolverhampton Wanderers side would frustrate Klopp’s side and their disgruntled supporters.

The double cup winners ultimately did what they needed to do with a 3-1 success, but the Citizens’ astounding turnaround against Villa ensured that the Premier League crown would remain in the grip of Pep Guardiola and leave Liverpool to rue what could have been.

Ending such a promising campaign with only two cups in the cabinet would not prove to satiate the travelling Liverpool party, and they were forced to navigate a scare against European specialist, Unai Emery and his giant-killing Villarreal side in the semi-finals, but no white flags were waved at La Ceramica.

Today’s encounter will mark the 10th time that Liverpool have appeared in the final of the European Cup/Champions League, and some may argue that they have enjoyed a relatively favourable run to the showpiece event, but as Klopp will surely stress, there are no easy fixtures in this competition.

While Inter Milan did shut out the Reds in a 1-0 Anfield win that ended up proving inconsequential, Liverpool have scored at least twice in the rest of their Champions League fixtures this term – no mean feat amid the unforgiving schedule that Klopp always had plenty to say about.

Furthermore, that loss to the Nerazzurri represents the Reds’ last defeat in any competition, with Klopp going on to oversee an 18-game unbeaten run in all tournaments since that defeat on March 8, including 10 wins from their last 11.

Numerous members of the current Liverpool crop collected runners-up medals in 2018 after that fateful night in Kyiv against Real Madrid, and revenge is firmly on the agenda for some of them – none more so than Mohammed Salah following his injury and tearful substitution.

Klopp has affirmed that the need for vengeance is not playing heavily on his mind, but a 33 per cent win percentage against Real Madrid represents the German’s worst against a single opponent, and ending that hoodoo today would certainly help make up for the quadruple dream failing to turn into a reality. His opposite number, however, knows how to win a Champions League.

Overturning a two-goal deficit against serial Champions League underachievers PSG is one thing. Dumping out the reigning champions after going 3-0 down at the Bernabeu is another. Overcoming Manchester City after letting in four goals at the Etihad? Carlo Ancelotti, take a bow.

Possessing a striker as lethal as Karim Benzema and a winger fulfilling his bags of potential in Vinicius Junior has propelled Los Blancos to the unlikeliest of comebacks in this season’s tournament, but the contributions of another Brazilian starlet cannot be forgotten either.

Seemingly down and out after 90 minutes against Man City, who moved into a 5-3 aggregate lead in the semi-finals thanks to Riyad Mahrez ‘s smart finish, Rodrygo netted twice in the space of two minutes to force extra time and leave the home supporters who exited early with egg on their faces.

Fans’ attempts to return to their seats for the extra-time period proved fruitless, but Real’s efforts to reach the final did not, as record-breaker Benzema’s penalty – not a Panenka one this time – ensured that the Spanish champions would board the plane to France and keep their continental campaign going right to the final whistle.

Understandably taking their foot off the gas slightly in La Liga having wrapped up the title with weeks to spare, Real only managed to win one of their final four top-flight fixtures in 2021-22, and their matchday 38 ended in a dull goalless stalemate with Real Betis in the capital.

One should certainly not take Real’s recent results at face value, with Ancelotti not afraid to rest and rotate his resources ahead of Saturday’s final, in which the most successful team in European history will aim to lift the trophy for a 14th time and end a four-year drought in the competition.

Los Blancos have suffered plenty of scares along the way, but their European pedigree is not up for debate, especially seeing as they have won each of their last seven European Cup/Champions League finals since going down 1-0 to Liverpool in 1981 – potentially a good omen for those in red.

Ancelotti will also be wary of the fact that his side have failed to keep a single clean sheet in this season’s Champions League knockout stages – albeit while scoring 14 of their own in their last five continental matches – and the wily Italian will aim to complete his own quadruple against Liverpool in Saint-Denis.

Indeed, the Real boss would become the most successful manager in Champions League history with a fourth success in the tournament – leaving Zinedine Zidane and Bob Paisley in his wake – but Klopp travels to the Stade de France fully intent on taking a leaf out of the latter’s book.