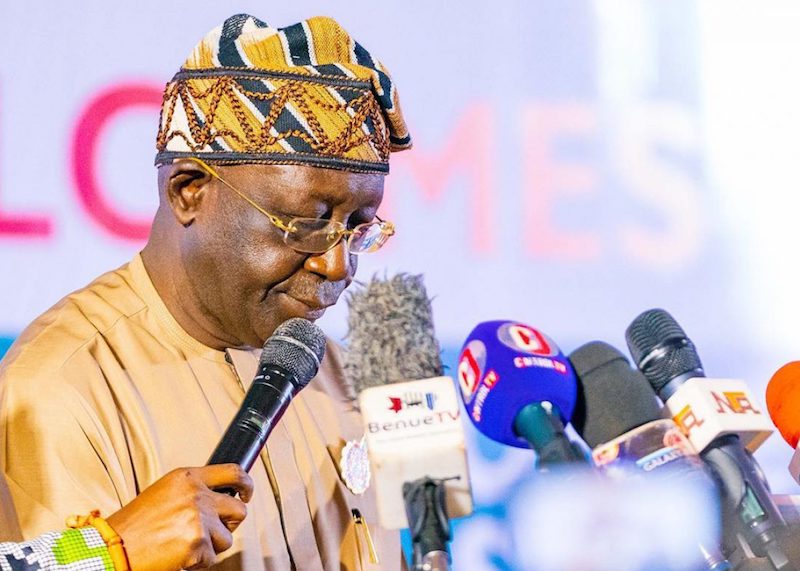 The Southern and Middle Belt Leaders’ Forum (SMBLF) has condemned in strong terms the decision by the two main political parties, the ruling All Progressives Congress (APC) and opposition Peoples Democratic Party (PDP) to jettison “the time-honored principle of rotation,” ahead of their presidential primaries, “which has traditionally served as the glue holding Nigeria together.”

On the same day, the National Chairman of the PDP, Dr. Iyochia Ayu yesterday told a visiting delegation of the European Union (EU) that his party was not getting very encouraging signals that there would be free and fair elections in the country next year.

The SMBLF in a communiqué, issued yesterday at the end of its meeting in Abuja, signed by its Chairman, Chief Edwin Clark; Leader of Afenifere, Chief Ayo Adebanjo; President-General, Middle Belt Forum, Dr. Pogu Bitrus; President-General, Ohaneze Ndigbo Worldwide, Prof George Obiozor; and National Chairman, Pan-Niger Delta Forum, Senator Emmanuel Essien, warned that the reported permutations by the two parties to foist Northern presidential candidates on the nation would be a grave misadventure, with grim consequences on national concord and harmony.

It reiterated its stance on the principle of zoning and power rotation between the North and the South, as the basis on which the Nigerian Federation has, since Independence, been premised, stressing that they are fundamental to the future existence of the country.

SMBLF therefore called on all delegates of all political parties to reject Presidential aspirants, or candidates, from the North, and only vote for those from the South in the party primaries.
The Forum also called on all politicians and professionals from the South not to accept, on any account, the position of Vice President, as that would amount to a shameful committal of present and future generations of Southern Nigeria to senseless political vassalage.

The leaders, while commending a number of northern governors such as Malam Nasir El-Rufai of Kaduna State, Aminu Bello Masari of Katsina State, Babagana Umara Zulum of Borno State, and Abdullahi Umar Ganduje of Kano State, who have demonstrated great patriotism by their public support for the rotation of the presidency to the South, urged other northern leaders, who believe in the oneness of Nigeria, to support this cause, because therein lies the unity and progress of Nigeria.

On the worsening state of insecurity and rampaging violence across the country, the Forum warned that Nigeria was plummeting into a state of total disorder and lawlessness, with attacks on innocent people resulting in kidnapping, loss of lives and destruction of properties happening in different parts of the country almost daily.
The Forum condemned in unmistakable terms, the killing of Miss Deborah Samuel Yakubu, a student of the College of Education, Sokoto, by her Muslim schoolmates and the wide spread violence that engulfed the state, following the arrest of two of her killers.

According to the leaders: “Sadly, the federal government and its security agencies are not doing enough to arrest the situation, whereby people can no longer travel safely either by road, rail or even by air to Kaduna State in particular. It is not only frightening but unimaginable that despite the heavy presence of military commands and installations in the State there could be such security challenges.”
The SMBLF cited the bombing of the Kaduna-Abuja bound train over 60 days ago, as well as the brazen attack on motorists on the Abuja-Kaduna Road about two days ago, saying, “on both occasions, innocent lives were lost while several people were wounded with many abducted. Undesirably, most of those who were kidnapped are still in the terrorists’ captivity after 60 days.”

It said it classified these killings as pervasive acts of aggression on the indigenous people, “being perpetrated by elements of Islamic extremism and terrorists, as cultural genocide and ethnic cleansing.”
The SMBLF continued: “The Meeting cautions that these bellicosities and deliberate programme to exterminate the indigenous populations of the Middle Belt are, by implication, acts of aggression against the rest of Nigeria, and would not be tolerated any further. The Meeting resolved to resist, through all legitimate means, the barefaced attempts by religious fundamentalists to impose on the rest of us, a Nigeria of “one country, different laws.”

Ayu yesterday told a visiting delegation of the European Union (EU) that his party was not getting very encouraging signals that there would be free and fair elections in the country next year.
Ayu, who spoke when the EU delegation, led by Samuela Isopi, visited the party as part of its mission on the Nigerian 2023 general election, said “insecurity is at its peak in Nigeria and extending beyond the rural areas and even coming to the urban centers.”

The PDP Chairman drew the attention of the EU and other members of the international community to the fact that Nigerians want free and fair elections in the country, adding, “The signals that we’re getting are not very encouraging.”

“They’ve always given support, they’ve shown interest, and we hope this will continue, because we don’t want to return to the dark days of dictatorship. We hope that the European Union, as our friends in the international community, will continue to support genuine democratic processes and institutions, because no country lives as an isolated entity in the world. And therefore we think that the European Union and other friends of Nigeria have an important role to play.”

According to Ayu, “It is not just the mobilisation by the political parties, but it is also the technical capacity of INEC to go out there and register Nigerians because in a population of almost 200 million People, we expect that 40% of the population should be captured on the electoral register and that is not the case.
“I think what we have today is less than 5% and it’s not good enough.
“And, therefore, we want to call on INEC and all our friends that can help in that direction to make sure more people are captured on the electoral register.”

So, he said the All Progressive Congress (APC) should be willing to accept defeat when the time comes.
Ayu said: “We worry about post elections as a political party. We have demonstrated that democracy is best when you transit smoothly from one electoral cycle to the other. And therefore, we want everybody to appreciate what we did when we lost elections in 2015. We didn’t use agencies of the state to stay in power.

“We conceded defeat and when we win, we expect those who are currently in government to concede defeat because they are going to lose the next election. And they shouldn’t hang in there and create an atmosphere of instability in the country. So with the current escalation of violence in the country, we hope, and we pray, that it is not deliberate to extend the tenure of this administration which has failed the country. We hope that when they lose, they also will willingly concede defeat, and hand over power to the Nigerian people.

“As a political party, we’re having our convention in the next eight days. And in the tradition of this party, we want our convention to be very transparent; we will provide a fair and open view to everybody i.e. our 15 presidential aspirants.”

Ayu also lamented the rising debt of Nigeria, saying when the PDP was in power, Nigeria was a debt-free country.
He said. “Today, we are the country with the highest debt to GDP in the world, it is in trillions. It is our hope that this will not continue because it has a direct impact on the Nigerian people.
“The lack of employment opportunities, lack of attention to even education, lack of attention to industrialisation, these have worsened the condition of our people, particularly the youth. Therefore, these are areas, as a party, we’re interested in addressing when we come back to power because we believe that Nigerians will vote for the PDP in the next election.”

Earlier, the leader of the delegation, Isopi, said the EU had been supporting Nigeria in strengthening its democratic governance through the support of all the stakeholders from INEC to the other actors and players of the process of the society, the media, and the political parties.
She further stated. “We have also at the request of the Nigerian authorities always deployed electoral observation, to entrench the process of democracy.

“This is part of our regular consultations with all the stakeholders, actors and partners, particularly in view of the next elections and I would like to reaffirm our support to Nigeria’s democracy and we continue to work together with all the institutions and stakeholders involved.”