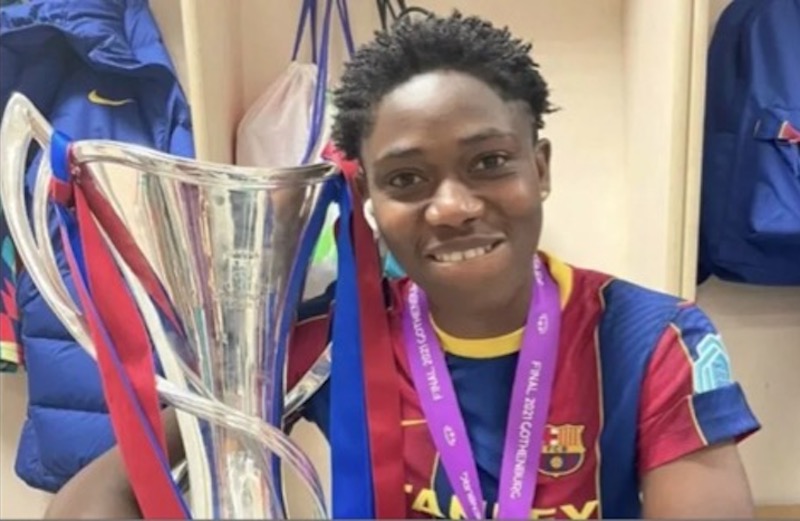 Since abandoning her education in pursuit of a football career, Nigerian international, Asisat Oshoala has never looked back- it’s been one success story  after another. This season her game had be blighted by injury, reducing her game time to just 12 starts in 19 appearances. Not deterred, the Super Falcons striker not only helped Barcelona to win the league for the second time in a row but went on to win the Spanish Premiera Iberdrola Golden Boot, making her the first African to achieve the feat. Beyond that the 27-year-old is focusing attention to add the UEFA Champions League medal to her haul

The 27-year-old, who opened her season account with a brace in a 5-0 win over Real Betis on September 11, grabbed her 20th goal of the season in a 5-1 win against Sevilla on May 5.

The 20th goal of the season saw the Super Falcons star level with Brazil’s Geyse of Madrid CFF, who failed to go further.

Despite being introduced as a 63rd minute substitute, the Nigerian could not add to her goal tally on final day’s 2-1 win against Atletico Madrid, but she still nicked her long-sought accolade, having played fewer matches (19) than Geyse (27).

The Nigerian captain was the highest goal scorer at the 2014 FIFA U-20 Women’s World Cup and was named the best player at the tournament. She was also named best player and second top goalscorer with the Super Falcons team who won the 2014 African Women’s Championship.

Oshoala was confirmed the joint top scorer of the Spanish Women’s football league on Sunday as her 20 goals proved enough for the award.

Oshoala has had a superb season, winning the league’s top scorer, and achieving a spotless league record.

Speaking on the award, Oshoala said: “It’s obviously been a team effort to get here, and l can only thank my team-mates and everyone at the club for this achievement.              “We’ve been working hard all season and cannot stop now because we have another big one ahead of us.”           Barcelona scored 159 goals in 30 games as they didn’t drop a single point. They conceded just 11 goals to establish their exceptional dominance.

Barcelona Femeni will face Lyon in the final of the Champions League today as they hope to successfully defend the title they won last year.

Oshoala, 27, is Africa’s most decorated female footballer and becomes the first woman from the continent to claim Spain’s golden boot.

After their historic league campaign which saw them pick up maximum points with 30 wins in 30 matches, Oshoala is targeting another milestone with Jonatan Giraldez’s team.

“The focus of everyone has shifted from a league title celebration to preparing for a massive game in Turin,” she added.

After that big night in Italy, Barcelona will then shift attention to El Clasico against Real Madrid in the Copa de la Reina semi-final on May 25, as they continue their quest for an historic quadruple.

Oshoala has now scored 81 goals in 104 appearances for Barca, and has signed a deal to remain with the Spanish giants until the end of the2023-24 campaign.

She joined the Spanish outfit from Chinese champions Dalian Quanjian in January 2019, initially on loan, before agreeing a permanent switch five months later.

The former FC Robo and Rivers Angels star had moved to the Far East in February 2017 from English side Arsenal, with whom she won the Women’s FA Cup at Wembley in 2016.

She finished as the Chinese Women’s Super League top scorer in 2017 with 12 goals to help her club to the title same year. Oshoala, who began her European career at Liverpool, won her third Women’s Africa Cup of Nations with the Super Falcons in Ghana in 2018, scoring three goals as Nigeria lifted the title for a ninth time.

Oshoala won the Confederation of African Football’s Women’s Player of the Year fourth time in 2020- equalling the record set by compatriot Perpetua Nkwocha.

The maiden BBC Women’s Footballer of the Year winner helped Nigeria reach the last 16 at the 2019 Women’s World Cup in France and will be hoping to lead her country to qualification for the 2023 World Cup and a record-extending 10th Nations Cup title in Morocco in July.

Nigeria have been paired with South Africa, who the Super Falcons beat on penalties to lift the trophy four years ago, in the group stage of the tournament.