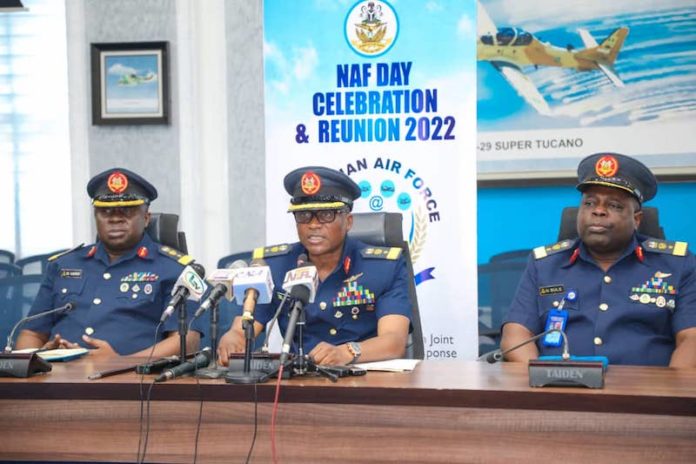 As Nigerian Air Force marks its 58th anniversary, it said bombing campaigns embarked upon  had degraded terrorist groups, Boko Haram, ISWAP and armed bandits in many parts of the country.

It said more emphasis would be laid on joint military operations and effective synergy with the other arms of the military and security agencies even as it was determined to consolidate on the gains of the employment of airpower especially at this critical stage in the nation’s history.

Speaking at a media briefing in Abuja, the Chairman, Organising Committee for the NAF 58th Anniversary Celebration/ Re-union 2022, Air Commodore, Olasunkanmi Abidoye, said NAF in its 58 years of existence, had no doubt grown into a formidable and respected force within the African continent and beyond.

“It has also continued to make significant contributions in the areas of internal security, humanitarian and peace-keeping operations as well as restoration and sustenance of democracy on the African continent and it is only rational, therefore, to celebrate its existence as well as the laudable achievements recorded over the years”, he said.

In his remarks, Spokesman of the Nigerian Air Force, Air Commodore Edward Gabkwet, said the air interdiction conducted by the force had reduced the capacity of insurgents to operate.

He noted that following bombing campaigns in Niger and Zamfara States, armed bandits and other criminals were on the run.

Abidoye announced that the forthcoming NAF day with the theme, “Enhancing Nigerian Air Force Efficiency in Joint Operations for Effective Response to Contemporary National Security Imperatives”, is scheduled to hold from 19 to 21 May 2022, at the Nigerian Air Force Base, Kano.