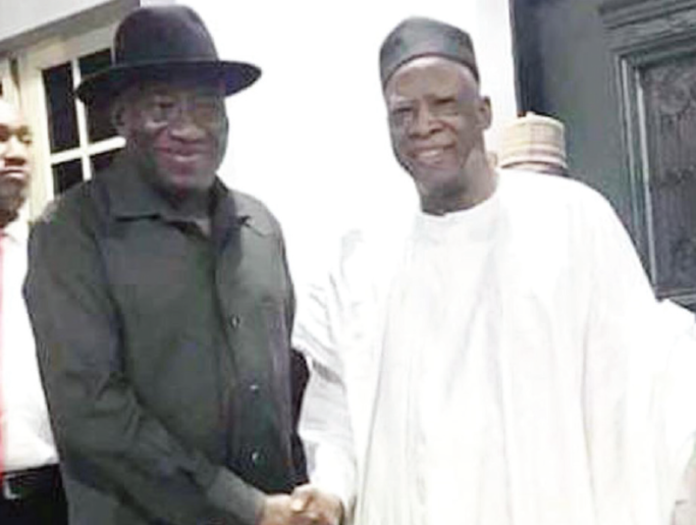 •72 hours after another group bought form for Adesina, he’s yet to deny presidential ambition

The former president, Dr. Goodluck Jonathan, yesterday met with National Chairman of the All Progressives Congress (APC), Senator Abdullahi Adamu, in Abuja, a reliable source informed THISDAY. The meeting, THISDAY gathered, took place few hours after a Fulani group, under the aegis of the Nomadic Pastoralists and the Almajiri Communities, purchased the ruling party’s nomination and expression of interest forms, sold for N100 million, for Jonathan. They urged him to contest for president under the party in 2023.

The sale of forms for elective positions in APC closes today, with 25 aspirants in the race for the presidential ticket in the party’s primary election slated for May 30, 2023.

Likewise, 72 hours after a coalition of 28 groups bought the N100 million APC forms for the President of the African Development Bank (AfDB), Dr. Akinwumi Adesina, he is yet to deny that he nurses presidential ambition. The AfDB president also met with President Muhammadu Buhari in Côte d’Ivoire, during the ongoing conference organised by the United Nations.

The meeting between Jonathan and Adamu held at a secret location in Abuja and lasted about an hour, specifically between 9pm and 10 pm. At the end of it, the former president and the national chairman came out smiling, THISDAY learnt. Although the agenda of the meeting was not disclosed, it further strengthened speculation about the former president’s likely defection to the APC which has been topic of discussion in political circles in the last two years.

Jonathan, in a statement by his media adviser, Ikechukwu Eze, said he was not aware of the purchase of forms and did not authorise it.

The statement read, “It has come to the notice of His Excellency Dr. Goodluck Ebele Jonathan, that a group has purportedly purchased Presidential Nomination and Expression of Interest forms, of the APC in his name.

“We wish to categorically state that Dr. Jonathan was not aware of this bid and did not authorise it. While we appreciate the overwhelming request by a cross-section of Nigerians, for Dr. Jonathan to make himself available for the 2023 presidential election, we wish to state, that he has not in anyway, committed himself to this request.

“We thank the general public for their concern, as we continue to encourage citizens’ participation in the affairs of the country.”

A reliable source had told THISDAY that some leaders in West Africa, which included presidents of Niger, Côte d’Ivoire, might have spoken on behalf of the AfDB president to Buhari.

There had been speculations that Jonathan wanted to take another shot at the presidency but on the platform of APC, the party that defeated him in 2015. The former president recently hinted that he was still consulting on whether to join the race or not in 2023.

The leader of the Fulani group that purchased the form for Jonathan, Ibrahim Abdullahi, said a lot of interest groups had been coming out to urge Jonathan to contest, adding that they needed to purchase the form to beat the deadline.

He said Jonathan had a comprehensive policy while in government to reform and integrate the Almajarai into the educational system of Nigeria.

Abdullahi added, “It was the dream and the vision of President Jonathan to produce doctors, lawyers and engineers from Almajarai, but unfortunately, that laudable vision was abandoned once he left office.,

“Another group that he tried to develop was the Fulani pastoralists. I believe if this government has continued with his vision, Nigeria would have become the Denmark, the Holland of the entire Africa, in terms of livestock production, in terms of milk, beef and so on.”

The sale of APC forms closes today, according to the timetable and schedule of activities of the ruling party, and submission of forms begins tomorrow.

THISDAY gathered that one of presidential hopefuls, Senator Bola Tinubu, would submit his nomination forms tomorrow.

The governor of Cross River State, Prof. Ben Ayade, who received his nomination and Expression of Interest (EOI) forms purchased for him by sons and daughters of Cross River State, Arewa Youths as well as other interest groups across the country’s six geopolitical zone, yesterday, said he would run for the office of the president in the 2023 general election. Ayade said he was confident of becoming the next president of Nigeria.

He said he “will be next president of this country.”

Ayade said he would replicate his successes as a state governor at the national level and help address the country’s myriad of challenges.

Bakare explained that the Peace Mandate would achieve policy thrust on nationhood leadership, governance and national security, while the Progress Mandate would cater for sectors like education, healthcare, family and social development.

The spokesman of the Northern Solidarity Group for Timipre Sylva, Suleiman Abdullahi, said they purchased the firm for him because they believed in his capability.

Responding, Sylva said he was honoured and humbled by the show of love, saying it shows commitment not to him, but to Nigeria.

However, Lawan, who was formally presented with the expression of interest and nomination forms purchased for him by the group led by Nkire, said he had consulted widely and promised to play the game by the rules.

He stated, “I have listened to various calls from all parts of our dear country, our dear nation Nigeria, for me to show interest to run for the office of the President of the Federal Republic of Nigeria.

“I want to commit myself to this call and to this movement of Nigerians from all walks of life, rich, poor, north, south, east, west, male, female, old and young.

“I am joining lately. The field is already full of other aspirants. I want, at this point, to assure Nigerians that the APC is a very beautiful bride and that is why we have many aspirants.”