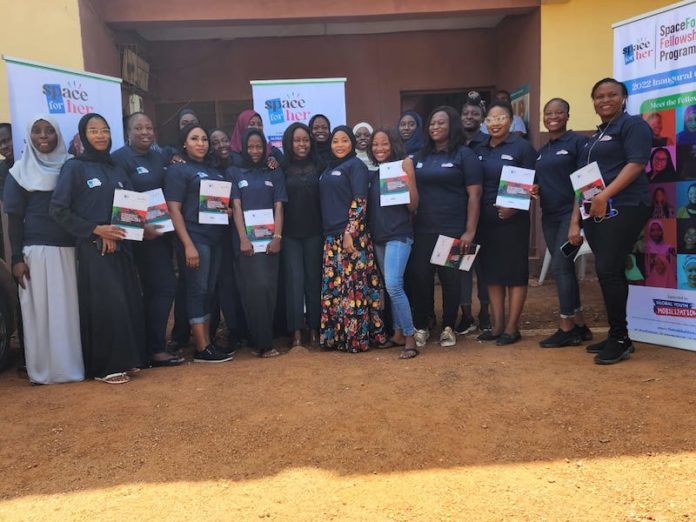 A women group based in Kwara State, SpaceForHer at the weekend urged the National Assembly  to make a law reserving deputy governorship seats automatically for women in  the 36 states of the federation.

It also advised the federal lawmakers to reconsider all the gender bills that they rejected during the voting on constitutional amendment on March 1, 2022.

Speaking at a news conference in Ilorin, during the unveiling of fellows of the group, the Project Lead of the group, Mrs. Tolulope Gbenro, said, “there are about five of these bills that seek to promote and establish opportunities for women in politics, governance and the society at large.”

According to her, “It may interest you to know that in the past few years, different local and international bodies have invested energy and resources to advocate for and support women’s participation in politics and governance.
“But despite all efforts put in place, we are yet to meet the 30 per cent and 35 per cent affirmative action for gender inclusion as contained in the Beijing Declaration and National Gender Policy respectively.”

She added, “You will all agree with me that, having enjoyed more than two decades of democratic rule, Nigeria has come a long way in its democratic journey and we hope that it will, going forward, take the issue of gender inclusion/women participation in politics and governance seriously, both at the national, state and local levels.
“We are therefore proposing that: Political parties should encourage and give room for active participation of women, rather than using them for campaigns only.

“The 35 per cent slot should be approved and used at the level of government for both political and appointive offices.
“There is a need for the creation of a safe and enabling environment that allows women to engage meaningfully in decision-making and take part in high-profile activities.

“The cost for forms of interest should be largely subsidised for female aspirants in all political parties.
“Denying women the opportunity to take active part in politics and governance is a violation of their fundamental human right and also violates the principle of democracy that provides for fair representation of all interest groups in the society. We must note that women’s participation in politics and governance is key to building a strong democracy and an inclusive society.”

According to her, there was the need to change the wrong perception some people have of women who participate in politics. :Many see women politicians as prostitutes, disrespectful and irresponsible.

“Unfortunately, there are women who hold these wrong notions as well; they show hatred to their fellow women who are into politics. This is wrong and should stop.”

Gbenro however noted that, “despite their large numbers and how much they vote during elections, it is worrisome and quite unfortunate that women in Nigeria constitute a small percentage of people in political decision-making and leadership roles.”