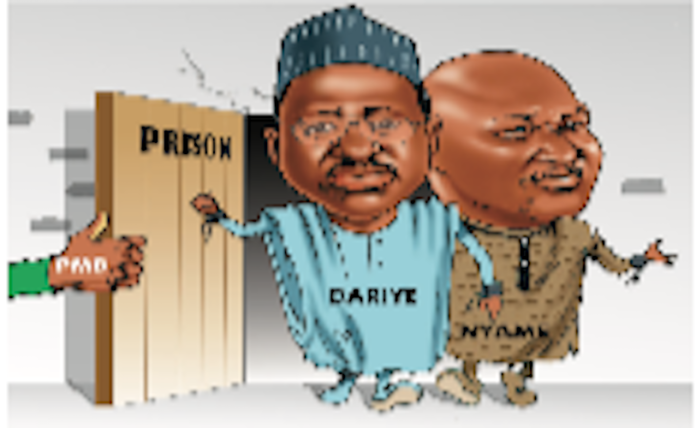 The presidential pardon is a mockery on the fight against corruption

President Muhammadu Buhari sent a wrong signal to Nigerians and the international community last week with the pardon granted to two former governors: Joshua Dariye of Plateau State and Jolly Nyame of Taraba State. Convicted of stealing billions of Naira, the duo had barely spent three years in prison before the controversial reprieve. Coming at a period the United States Department of State Country Reports on Human Rights Practices just issued another damning verdict on Nigeria, the decision is a serious indictment on the current administration and its so-called war against corruption.

Ordinarily, one distinctive feature of democracy is the right of the people to expect and demand good governance from elected officials. It is also the duty of the latter to perform creditably. That, in a nutshell, is the whole essence of public trust. In Nigeria, however, this noble relationship has for long been misapplied such that public expectations of office holders in the country seem to be at conflict with national aspirations. It is then little surprise that many of the overpaid politicians and public officials have continued to fleece the very people they are supposed to protect and yet walk the streets free. What the pardon granted Dariye and Nyame has therefore confirmed is that stealing public money is not a big deal.

Although the decision to pardon Dariye and Nyame came after a Council of State meeting, the responsibility falls squarely on the president. Besides, with the Economic and Financial Crimes Commission (EFCC) and the Independent Corrupt Practices Commission (ICPC) in court against several politically exposed persons, it cannot but be demoralising that two of the few successfully prosecuted cases on which convictions were secured have now been cynically undone. For someone who came to office with a pledge to fight graft, President Buhari ought to have been mindful of his responsibility at a time the issue of corruption is on the front burner. What he particularly failed to appreciate is that decisions like this put to question his commitment to transparency and accountability. In other countries, a pardon of this nature is usually granted at the end of an administration. What we therefore would have expected was for the president to wait for his last days in office before granting a pardon that has not only brought ridicule upon himself but on the country.

While the president reserves the power to pardon repentant convicts, such powers must always be judiciously exercised in the national interest and on the side of natural justice, equity, and good conscience. The pardon of Nyame and Dariye does not in any way meet the above criteria. You can’t fight corruption when all citizens are deemed unequal before the law as the pardon granted Dariye and Nyame has clearly shown.

The growing public perception that this administration is not committed to good governance and the fight against corruption should be of serious concern to President Buhari as he comes to the twilight of his tenure. All those who work in the anti-corruption space must feel really let down by this unconscionable and dispiriting action. The deflection to Council of State is fraudulent. It is a proposal from the presidency that gets discussed at Council, which is an advisory, not an approving, body. And with this ill-considered pardon, the president has not only undermined himself but several critical institutions. It is sad development that makes a total mockery of the anti-graft war.