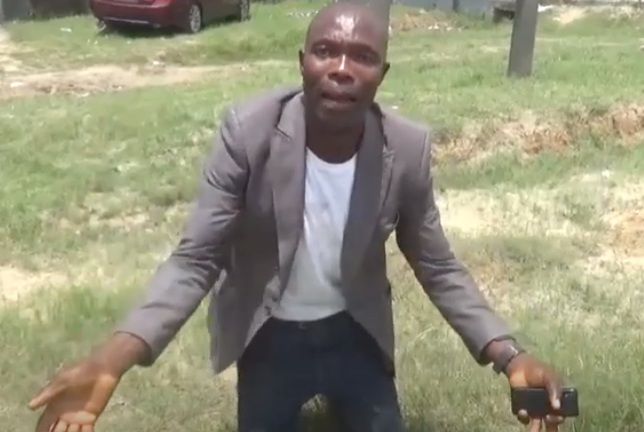 A man, identified as Alfred Ayo, who claimed he is the father of a child allegedly missing in Christ Mercy Land Church in Warri yesterday said his child is only being used for business and not missing.

He equally accused his estranged wife Ruth of selling their child with her boyfriend.

In a video making the round on the internet, Ayo insisted that his wife and her boyfriend knows the whereabout of his son, who he identified as Testimony.

Ruth had alleged that Fufeyin kidnapped one of her sons after she brought four of them to the church.

Although the Nigerian Police had dismissed the case stating that the allegations “were inconsistent with the truth while the matter is also in the court of law.

Founder of Abuja based Human Right Radio, popularly referred to as Brekete family, Ordinary Ahmed Isa, who was at some point investigating the story earlier this month slammed Ruth and her supporters over the case of the alleged missing child.

Isa, while speaking during a live programme on the radio station had said he won’t be used in pulling down anyone, stressing that the station would not be involved in cases that have iota of lies.

Reacting to the case Isa said the woman who brought up the case could not substantiate her claims and was also looking for ways to use the opportunity to move abroad.

While some people had accused the station of being bribed into dropping the case, Isa said most of the people accusing the station were only looking for cheap publicity and would have rather continued the case if they are able to substantiate it.

The development, which came up about three years,  resurfaced recently as some pastors and NGO stood up to seek justice.

The development had led the church to file a suit in court over the issue, stating that there was need to put final stop to the matter.

Ayo, who spoke at court premises in the video said he only realised what was going after his attention was drawn to some publication on the internet about the case.

While appealing for government intervention over the case, Ayo noted that his wife and the boyfriend he ran after knew the where about of the child.

Ayo alleged that the wife also ran away with his money, adding that he needed help in recovering his babe and his money.