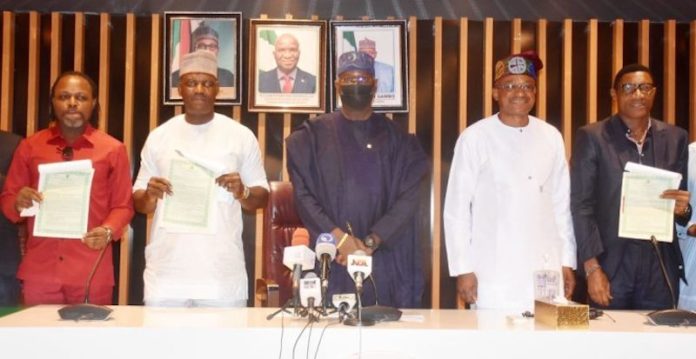 Minister of Works and Housing, Mr. Babatunde Fashola, yesterday presented Certificates of Occupancy to some members of the 1994 Super Eagles squad to the African Cup of Nations in 1994, 28 years after the federal government made the pledge.

At the event which took place in Abuja, Fashola recalled that the matter began to gain traction in the public space again after his counterpart at the Ministry of Sports and Youth Development, Mr. Sunday Dare, intimated him of the non-fulfillment of the promise.

He explained that because it would be almost impossible to give the entire team and some crew members houses in Abuja, it was decided that the beneficiaries will pick a state of their choice where they wanted their buildings.

Subsequently, the minister explained that President Muhammadu approved the incorporation of the names of the beneficiaries into the National Housing Programme (NHP), culminating in the handing over of the documents.

“This promise is late enough and we want to ensure that it does not delay any further,” the minister stated, adding that once the beneficiaries get to the site, the keys to their houses will be handed over to them.

He disclosed that during collation, the name of Finidi George was left out in error, noting that it has now been sent to the president for approval.

In the 1994 African Cup of Nations, the 19th edition, which was hosted by Tunisia, Nigeria had won its second championship, beating Zambia in the final 2–1.

Eguavoen, who responded on behalf of his colleagues, lauded those who made the event possible, adding that it is a good thing that the labour of Nigeria’s heroes past had not been in vain.

Eguavoen apologised for the failure of the Super Eagles to qualify for the 2022 World Cup in Qatar, stressing that the government was magnanimous not to consider the unfortunate incident as an excuse to further delay the fulfilment of the pledge.

“As you all know, I was saddled with the responsibility of qualifying Nigeria for the World Cup tournament coming up in Qatar, but it wasn’t to be. So I want to use this opportunity to apologise to the entire Nigerians,” he noted.