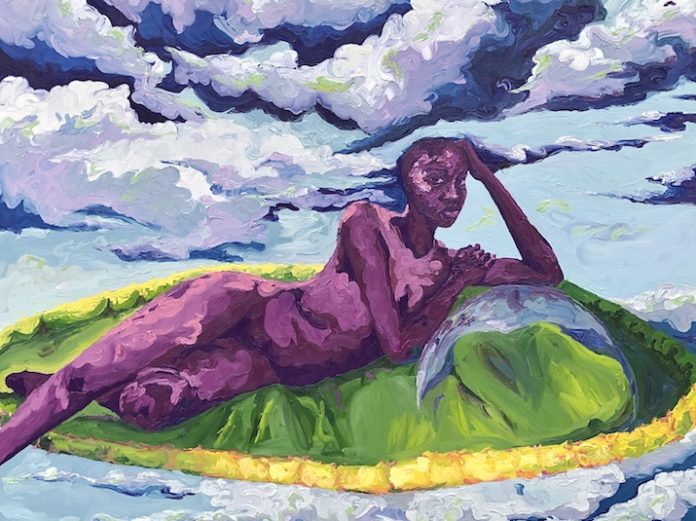 In Lagos, five female artists namely Donna Duke, Nene Mahlangu, Roanna Tella, Buqaqawuli Nobakada and Tomilola Olumide worked their paints around the exhibition theme “I AM …and Nothing Else” without brushing past the fundamental issues of identity, femininity, submissiveness and freedom. Yinka Olatunbosun reports

Echoes of cultural norms that were harmful to African women could be heard through the voices of five visionary female artists who collectively showcase their paintings at the Affinity Art Gallery, Victoria Island Lagos. Across generations, women have confronted situations that jeopardise their happiness, freedom or even question their identity. For instance, women are made to dread getting older instead of cherishing it as a blessing. Reinforced by religion and culture, women are taught to be submissive- at the risk of sheer servitude, loss of freedom and right to self-determinism.

To create awareness on these issues and celebrate the International Women’s Month, Affinity Art Gallery hosts the exhibition of works of five female artists on the theme “I AM…and Nothing Else.” The show which opened on March 20 revolves around the themes of healing, identity, community, wholeness, and femininity using a variety of materials. Curated by Moni Aisida, the exhibition knits individual artists’ perspectives with female storytelling inspired by one of the works of the author, poet and psychoanalyst, Clarissa Pinkola Estes. The poet often articulates her thoughts using multicultural myths, fairy tales, folk tales and stories.

Back to the wall paintings, the self-taught artist, Donna Duke presents a personal narrative in each piece inspired by the surrealist painter Frida Khalo. Her piece titled “The Seemingly Submissive Dreamer’’ shows a spiritual side to the issue, rekindling faith and hope. In another piece titled “Within,” the artist who is currently pursuing a Masters’ degree at the University of the Arts, London taps from her family to reflect the resilience of a woman.

“I thought of my mother and sisters who are now mothers themselves. It is commonplace for a woman’s role in the family to be one of a therapist, holding the family together and taking on the weight of the emotional troubles of the family,’’ she revealed. With motifs of power of gold and copper leaf, Duke affirms the need for recognition of power, fortitude and strength in the historical and contemporary context through black female storytelling.

The South Africa-based Nene Mahlangu who is the youngest woman to design two coins for her country, presents in this exhibition figures depicting vulnerability, healing, confidence and a transcendent sense of power. Pushing through the pandemic, the artist worked on self-portrait paintings in ‘Before Midnight’, ‘Time Stood Still,’ ‘The First of January’ and the series titled “Getting Ready.’’

Roanna Tella creates an alternate reality by situating herself in dreamscapes, providing a visual opening into emotions by examining how people respond and cope with traumatic experiences. She incorporates hand-sewn narrative, embroidering texts along the borders of her paintings in response to the overarching theme with a series titled “Resting in cerulean, ultramarine and purple.’’ With this body of work, she questions the pressure on women and the need to embrace rest.

As for Buqaqawuli Nobakada, her pieces are deeply personal yet universal in the treatment of issues of humanity, sexuality, intimacy and growth. Using laced paper and paint, the South African artist relives the gender role associated with the chore of lace curtain repair. The chore is considered as a rite of passage and an initiation into womanhood. Some of her pieces include ‘Downtime,’ ‘The Girl with The Ginger Hair’, ‘Never Leave’ and ‘Coming Undone.’

Perhaps, the most unfiltered take on the theme is Tomilola Olumide’s installation titled ‘Lamentations of Lips that keep moving.’ Made of adire, beads, wire, wood, Pvc and foam, the work challenges female inferiority, intimidation, repressiveness and imposter syndrome.

“In the Nigerian society, oppression of the female gender is rooted in the pleasure of the male ego, which is fragile and dares not be challenged,’’ she said.

At the opening, the curator for the show, Moni Aisida summed up the contributions of the five female artists.

“There is a full spectrum of what it means to be an African woman. Olumide seems to be more direct in her criticism of how society treats women; Nobakada is focused on women being soft, being allowed to be delicate. As African women, we have been depicted as strong, carrying loads on our heads but that is not all that we are. We can be strong and soft, broken and torn. The whole exhibition is about allowing women to just be who they are. That’s the motivation for this exhibition,’’ she said.