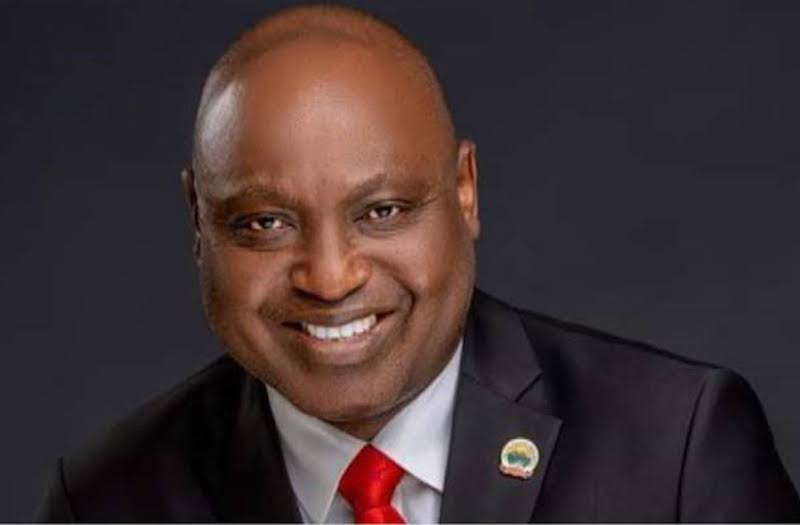 The Ooni of Ife, Oba Adeyeye Enitan Ogunwusi, has charged the alumni of the  Ekiti State University, Ado Ekiti, to support the former Secretary to the State Government(SSG) and the All Progressives Congress (APC) governorship candidate, Hon. Biodun Abayomi Oyebanji, to emerge victorious in the June 18, 2022, gubernatorial poll.

Oyebanji graduated from the university in 1987 and took up lecturing job and subsequently became a member of the Governing Council of the university before he forayed into politics.

Ooni, who is the Life Patron of the EKSU Alumni Association, spoke at the 40th anniversary dinner and award of the university held in Ado Ekiti last Tuesday evening.

Oba Ogunwusi said considering Oyebanji’s pedigree and contributions to the university as an alumnus, former lecturer as well as his contribution to the state in general, he was convinced that the APC governorship standard bearer remains a good choice for the number one position in the state.

The Ooni, represented  by Alara Odaye of Ara Land, Ile- Ife, Oba Adebisi Segun Layade, congratulated all the stakeholders of the university, especially the Vice Chancellor, Prof Edward Olanipekun, for their efforts, over the years to make sure the institution remains a university of choice in Nigeria.

“As someone who is familiar with history of Ekiti State as a lover of education, I am not surprised about the feat the Ekiti State University has achieved over the years. Today, I am bold to say anywhere that I’m related to one of the best universities in the country.

“To this end, I congratulate our young and dynamic Vice Chancellor, Prof. Olanipekun, for his quality leadership which is daily germinating in the lives of the products of the school, and I appreciate sincerely members of the alumni association for always looking back and willing to contribute their quota,” Ooni said.

Speaking further, Oba Ogunwusi described the emergence of Oyebanji in the political scene as God’s design to perfect the good work he had started in EKSU, and called on the entire university community and the alumni association to see Oyebanji’s candidacy as their project, and work tirelessly to see him emerge as the Ekiti State governor in October 2022.

In his remark, the university Vice Chancellor, Prof. Olanipekun, who spoke glowingly about the state Governor, Kayode Fayemi’s erudition and commitment to the institution, also called on all members of the alumni association and the university community to bury their political differences and adopt Oyebanji, a former student of the institution, as their sole candidate in the forthcoming governorship election.

Speaking on behalf of the awardees, Oyebanji commended the Dipo

Bamisaye-led alumni association for the efforts being made daily to attract development to the university, and appreciated the association for considering him worthy of the award.

According to him, “Today is important to me because I’m being honoured in my own home. It’s often said that a prophet doesn’t get recognition in his home, but I’m happy that today’s event has negated that saying. I commend the leadership of our association, especially our global President, Bamisaye, for the effort they have put in taking us thus far. I appreciate the VC for his purposeful leadership, and I promise to always be a good ambassador of our great institution.”