Aspirants in the just concluded gubernatorial primaries of the Peoples Democratic Party (PDP) in Ekiti State have been urged to bury their differences and work together for the victory of the party in the state.
Akwa Ibom State Governor and head of the 5-man PDP primary election committee in Ekiti State, Mr. Udom Emmanuel, madel the appeal while fielding questions from Government House correspondents at the Victor Attah International Airport, Uyo, upon his return from the assignment.
He thanked the National Chairman and the National Working Committee of PDP for the opportunity to serve the party, describing it as a privilege he could not take for granted.

Expressing satisfaction with the integrity and conduct of the primary election, Governor Emmanuel described the exercise as transparent, fair and credible and therefore called on all participants in the contest to acknowledge the supremacy of the party and pull forces together to ensure victory for the party in the impending Ekiti gubernatorial election.
“I think personally, I’m satisfied that the process was credible and I also believe almost 100% of the people that watched it will give us credit that it was a very credible, transparent, free and fair election. My advice is, let all of them go back and work together.
“We have only one seat and only one person can occupy that seat. If after all what the party did at the NWC to accommodate all aspirants, the people then spoke and said this is the person we want to bear the flag of the party, I think all others should just join hands and work together.

“Party is supreme, let the party win then they can all sit down and talk”.

Mr. Emmanuel described as false and speculative, insinuations of unfair treatment and disenfranchisement of some aspirants, maintaining that the process was devoid of malpractices and created no room for expression of ill behaviours that would have given grounds to discredit the exercise.
According to him, such insinuations were indications of pre-perceived defeat. He maintained that the committee had an authentic list from the National Working Committee, which it followed religiously, stressing that no single person voted without being accredited and that there was none accredited that was not allowed to vote.
“I’ve heard a whole lot, how some aspirants, even before the process started, went to the press.
“I think they knew the outcome before we went into the election.
“Some of them came to make trouble but by the time they saw that there was no room for such trouble they knew there’s no way they could have made it”, Emmanuel stated.
“All the aspirants gave us a very excellent mark for all the processes, from accreditation to voting, to sorting, to counting, even to declaration of result. Even after that we gave them opportunity to speak if they were satisfied. We also had to make sure one of the international TV stations beamed it live so everybody could see the processes” he added.
The Governor therefore, cautioned the public to be cautious of politicians who promote violence as means to grab power and sued for peaceful politicking towards the 2023 polls.
“As we go into 2023, people will give peace a chance. If you want to serve the people, you can’t serve the people with a gun. Whoever carries a gun to serve is not going to serve the people but himself.
The Ekiti PDP Gubernatorial primary election, which was contested by 12 aspirants had Hon. Bisi Kolawale emerging as winner with 671, edging out his immediate runner up, Segun Oni, who scored 330.

Bisi Kolawale is a former member of the National Assembly 2007-2011, and also served as Environment Commissioner in former Governor Ayo Fayose’s administration. 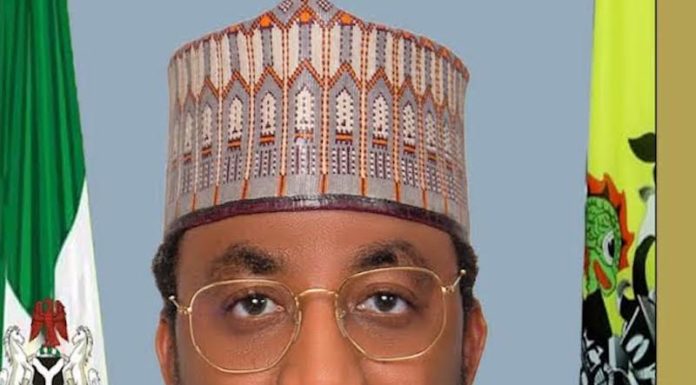