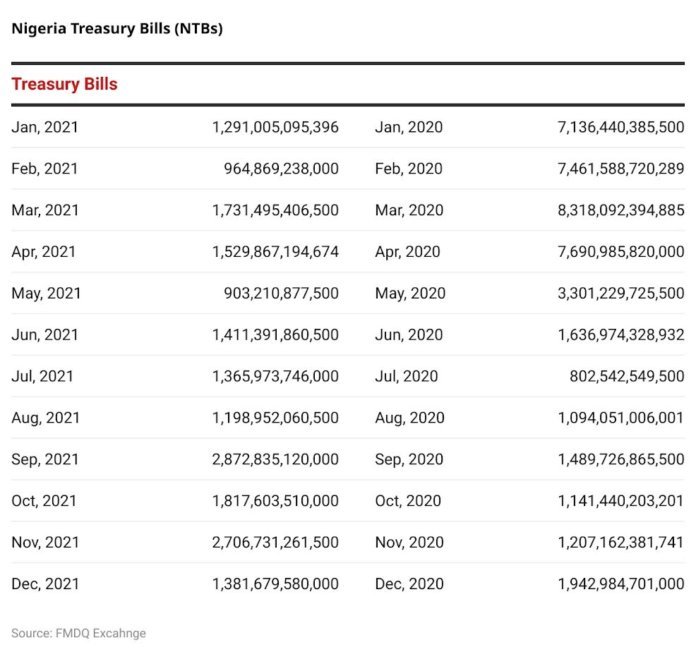 Due to low yield environment heightened by illiquidity, the total turnover trade recorded by FMDQ Exchange on Nigeria Treasury Bills (NTBs) dropped by 55.6 per cent in 2021 as investors divert to more lucrative money market instruments and stock market.

Analysis of FMDQ numbers revealed that the total turnover trade on the NTBs dropped to N19.2 trillion in 2021 from N43.22 trillion reported in 2020.

In the year under review, the total turnover at the foreign exchange market dropped by 2.3 per cent to N29.45 trillion in 2021 from N30.14 trillion reported by the FMDQ Exchange in 2020.

Experts believe the decline in turnover trade on NTBs was due to poor yield environment which discouraged investors in trading on FMDQ.

He added that the scarcity of foreign exchange also played critical role in the downward turnover trade recorded by FMDQ Exchange on NTB in 2021.

“The yield in 2021 as against 2020 was not attractive to investors to trade in the NTBs on FMDQ market,” he added.

According to analysts at United Capital Research, the Central Bank of Nigeria (CBN) in the primary market conducted a total of 27 NTBs auctions in 2021, rolling over N3.5 trillion worth of maturing bills as against N3.1trillion in 2020.

On the FIC side, aanalysts stated that the decline was due to low foreign exchange supply to the specialized investors and exports window, weak intervention by the CBN.

They stressed that the inflow in foreign exchange was another major contributing factor.

The Vice President, Highcap Securities Limited, Mr. David Adnori, said the decline in foreign exchange market turnover in 2021 was as a result of scarcity caused by the existing challenges of COVID-19 virus.

According to him: “A lot of the transactions in the foreign exchange market went to the parallel market that comes with higher price and the major reason for this is availability.”

He said the global trade has not fully recovered from the COVID-19 pandemic lockdown, leading to weak supply of foreign currencies into the Nigeria’s market.

He added, “A lot of Nigerians in the Diaspora who used to send remits are also faced with the impact of the pandemic. Although, we have seen steady increase in crude oil price but the backlog of hard currency demand from CBN has also affected supply.

“Foreign investors are also showing interest due to challenges in their market. In addition, the federal government is also committed to foreign currency spending and it also contributed to supply.”

THISDAY had recently reported that FGN Bonds, Eurobond, among other bonds on the FMDQ Exchange market also dropped by 26.24 per cent in 2021.

According to THISDAY findings, a total turnover of N20.31trillion worth of FGN Bonds, Eurobonds, Agency, Sub-national, Corporate, Supranational Bonds & Promissory Notes were traded in 2021 as against N27.53trillion traded in 2020.

“The volatile fixed income market evidenced in the uptick in FGN Bond yields in 2021 (average increase of 2.11ppts), led market participants to maintain a ‘wait and see approach’ to avoid realising losses on fixed income securities which were bought at a higher price (lower yield) in 2020 and are currently trading at a lower price (higher yield).

“The Eurobond market was driven by several factors in 2021 which led to a mixed performance in 2021. The price of Bonny Light (Nigeria’s crude oil) surged, gaining c.40per cent in 2021.

“In addition, crude oil production continued to recover as the increase in oil demand led to an upward revision in the production cap by OPEC.”

He noted that these factors contributed to the positive sentiments around a rebound in economic activities, which supported Eurobond performance in 2021.

“However, surging inflation in the US raised fears of policy normalisation by systemically important central banks across the globe which dampened the performance of the Nigerian Eurobond market.

“In summary, the Eurobond market closed the year on a bearish note as average Eurobond yields rose by 200bps in 2021,” he added.

Commenting on the fixed income outlook, a group of analysts at United Capital Research in a report explained that: “Following the upward reversal in the yield environment in most part of 2021, the yield landscape closed the year in an uncertain position as the long end of the yield curve stalled with investors maintaining a standoff approach towards the debt market.”

The firm in a report titled: “Nigeria Economic Outlook 2022: Navigating Stormy Seas,” said in 2022, investors seek to get clarity on the direction of interest rates in order to properly manage their fixed income exposures.

Explaining the key factors expected to shape the interest rate environment in 2022, they stated that monetary policy stance would be hawkish adding that government may be reliant on the domestic debt market.