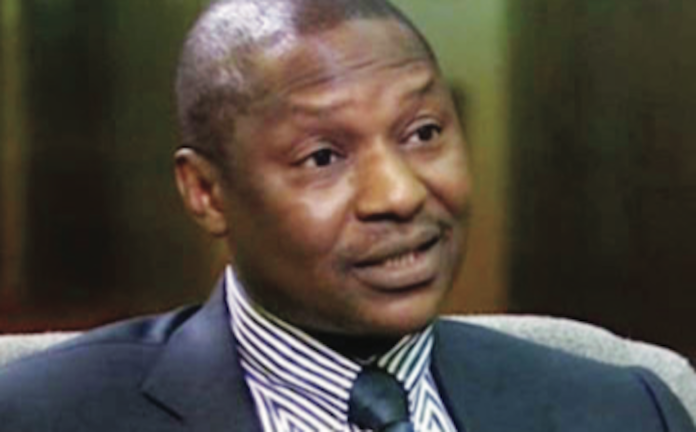 ‘’Dear Learned Silk, the role of the Attorney- General, is simply to defend Government, prosecute criminals and send them to prison. Your foray into the realm of protection of citizens rights, is ill-advised and ultra vires. If you want to protect citizens rights, you should resign from office and be a defence counsel.’

This comment and similar insults, cluttered my WhatsApp and social media handles last week. I had posted a tweet about my intervention in the matter of a 21-year-old convict. This was not the first time that I have received hate or rude texts, since my appointment as Attorney-General, but these latest ones were particularly vicious. As a public servant, one has to develop extra- thick skin to accommodate the rude, the uncouth and the less than decent. Most who have found a hiding place in social media to practice their ignoble hobby, writing vile.

My experience with hate texts/ mails, dates back to my first appointment as Ekiti State Attorney-General in 2012. Not many were enamoured by my idea of opening a sex offenders register, and they made their views known, expressed largely in gutter language. This has continued anytime the Ekiti State Ministry of Justice publishes the identities of sex offenders, on the Ekiti State Government social media handles. I am preparing myself for another round of vile mail this week, as we publish the identities of another set of convicted sex offenders, the first in 2022.
In recent times, my publicised interventions in maters of persons who come into conflict with the law has received an equal balance of knocks and accolades.

I recall two incidents similar to this current hullabaloo. An 18-year-old boy was arraigned, and charged for murder in the High Court of Ekiti State. Based on the Police Investigation Report, the Director Public Prosecutions (DPP) rightly gave ‘a case to answer’ advice. I took over the case, mid-trial. For some reason, the full medical report on the cause of death of the victim took forever to reach my office. I eventually received the report while in court examining the final prosecution witness, who had given pretty compelling evidence against the Defendant . The medical report directly contradicted the Police Investigation Report. I decided on the spot, to withdraw the charge against the Defendant. Understandably, the deceased’s family and friends were furious, and threw everything allowable and not allowable on the Internet at me.

The other matter was the case of a young man, who was arraigned on a charge of armed robbery. He was alleged to have robbed an Okada rider of his motorbike at gunpoint. We had only one star witness, who in his statement to the Police clearly confirmed the identity of the Defendant as the offender. On the eve of trial, my office invited this star witness for a pre-trial conference. It was then he expressed surprise that we were still on the matter, because the local vigilante had recently caught the actual robbers, and the person we were prosecuting was not one of them. I went to court the next day, to withdraw the charges against the Defendant. Again, I received a lot of insults. I recall one prominent community leader telling me in no uncertain terms, that I had failed the State. He said it did not matter, if the Defendant was the robber or not. That for him to have been arrested in the first place, meant that his ‘hands are not clean’.

My recent public apology to victims of the #EndSARS protest in Ekiti State, including Police Officers who were victims, was not well received by some. In the words of one public analyst, ‘the wind was taken out of the sail of my public apology by my reference to the Police. #EndSARS is about ordinary people, and not the Police’. I then got a lecture and many ‘we hate you texts’ from some self-acclaimed #EndSARS activists. The fact that Ekiti State is the first State to have paid compensation in full to all victims of #EndSARS, did not as much as catch their attention.
The point that my office constantly seeks to make is that, we are not about securing a conviction at all costs.

Last week, I tweeted about my intervention in the case of a 21 year old convicted for armed robbery. The ‘untweeted’ background story is that, the only tangible proceeds of his crime was a Samsung galaxy laptop. He made a confessional statement to the Police. At the beginning of the trial, I had urged the defence Lawyer to enter into a plea bargain agreement with my office. We took note of his aged mother, his only child status, what was stolen, the weapon used (a wood), the attitude of the victim, and the demeanour of the Defendant himself. On face evaluation, he was certainty not in the category of the hardened ones that we prosecute daily. We offered a plea of guilty, in return for reduction of the charge to a lesser offence. His Lawyer refused, even after the Defendant himself admitted that his confessional statement was voluntarily given. At some point, his Lawyer complained loudly in court that he did not know why the AG was interested in the case. This was the situation until we closed our case. On more than two occasions on the court appointed dates for the adoption of briefs, the defence counsel failed to show up. We allowed him to choose a date that was convenient for him. On the date of his choice, he again did not show up to adopt his brief. Having already filed his brief it was deemed adopted by the trial Judge. His client was subsequently convicted, and sentenced to 21 years imprisonment.

In our post-trial review, my office found that this Defendant was not professionally represented. We then decided to refer his matter to the Ekti State Advisory Council on Prerogative of Mercy, on grounds of ineffective legal assistance. This was the experience we sought to share on our social media handles, that evoked several unwelcome comments. There were some who fairly felt that the AG should not be seen to be giving a soft landing to convicts, notwithstanding extenuating circumstances.

Some (sadly including a number of Lawyers) said my intervention was ‘medicine after death’, and that I should have referred the matter to the Advisory Council on Prerogative of mercy during the trial. I have respectfully, asked them to make an effort to read more on the workings of the Council. I sent copies of the Ekiti State Advisory Council on Prerogative of mercy guidelines, to many of them. We have to help each other in the area of continuous legal education.
Several said that the AG should have stopped the trial, and complained to the trial Judgr that the defence was badly conducting its case. Really? How? Not a few thought that this was all about politics. In the words of a particularly animated, but poorly informed commentator, ‘the AG is on an antic of pandering to populism to score cheap political points’. I do not know any politician or political party whose manifesto includes, providing legal relief to convicts.

The AG as Protector of Citizen’s Rights

A cursory reading of most of the commentaries, showed a tragic lack of understanding of the role of the Attorney- General. It is certainly no longer the situation, that all we do is to represent Government and secure convictions. In many States of the Federation, the AGs are making the difference in justice sector reform and intervening in matters of citizen’s rights. Almost all the States, have established departments of citizen’s rights and offices of the public defender. Also, in response to the scourge of sexual violence nationwide, not a few AGs have established Gender Based Violence units, to provide focused attention on issues of sexual and domestic violence.

The AG as a Law Reformer

Most flawed is the commentary by some, that it is not the business of the AG to propose laws. Nothing could be further from the reality of the daily experience, of the Ministry of Justice. There is no State Ministry of Justice, without a department of legal drafting. In all the 36 States, AGs are leading reforms in review of criminal laws and other legislation that relate to the administration of justice. In Ekiti State, we have just competed a holistic review of the laws of Ekiti State with focus on those laws with punitive provisions. We have redrafted our criminal law, and published policy statements and guidelines on plea bargain and prerogative of mercy. We will shortly publicly present our State action plan on human rights.

I have struggled to explain to some learned friends, that there is no contradiction between the Director Public Prosecutions ‘case to answer’ advice, his determination to efficiently prosecute offenders, and the insistence of the AG that such offenders must be professionally and efficiently represented. To say, as some did, that the AG is ‘a busybody in matters of legal representation of criminal Defendants’ is ridiculous, and does not take cognisance of our additional ‘Commissioner for Justice’ title. To be clear, it is the duty of the AG to ensure that criminal Defendants are properly represented. Indeed, where a Defendant is unable to afford legal representation, the AG should work with the court in providing State assisted legal aid. The argument that a criminal Defendant who feels he was not properly represented is at liberty to institute a civil suit against the defence Lawyer is totally unreal, especially in the face of the financial situation of many of those standing trial or serving time in our correctional facilities. For clarity, the standard expected from defence counsel is not higher than that expected from prosecuting counsel. Across many States of the Federation, AGs have developed prosecution guidelines, which lists the conduct expected from prosecutors in criminal matters. In Ekiti State, we have gone a step further by enacting a novel Attorneys-General Law, that includes a Code of Conduct for State counsel in the Ministry of Justice.

Many of the serving States’ Attorneys- General agree that, understanding the role of the AGs will not be an event. There is simply too much cynicism. We need to disregard the distractions and continue to prioritise our efforts to make our people more aware of their human rights, their rights in the legal system, the new values of the Justice Ministries, and the services that we offer and how to use them.