Buhari: Killing of 30 Soldiers, 7 Policemen By Terrorists in Shiroro, a Direct Assault on Nigeria 4 mins ago 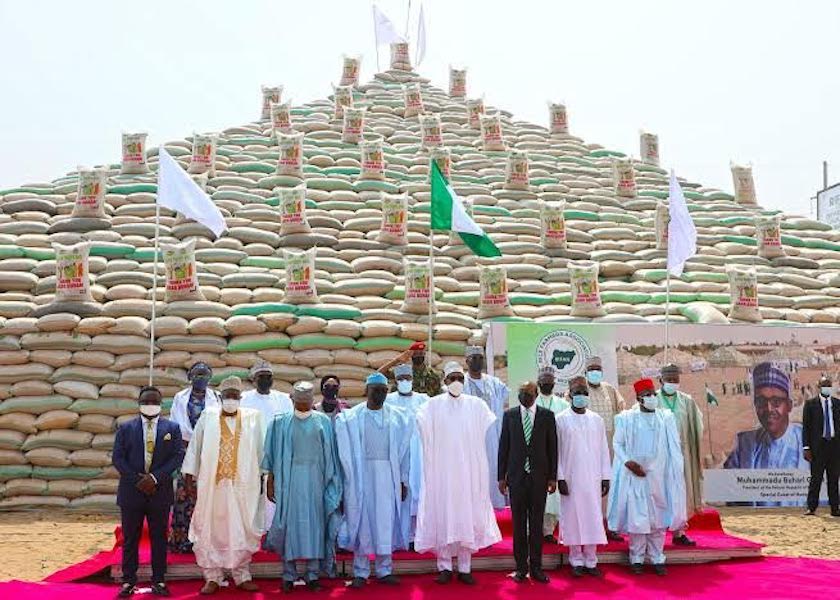 The rice revolution ushered in by the CBN’s Anchor Borrower Programme remains an indelible reference point in the government’s drive to diversify the economy as well as reposition agriculture, but consumers of rice want to see that the bumper harvest reflects in the current price of rice in the market, James Emejo writes

In the past two years, Nigerians have had to endure the persistent increase in the price of cement with the attendant hardship it brings to bear.

The retail price of the commodity has risen more than 177 per cent from N1,800 to N5,000 as currently witnessed in parts of the country.

In January last year when the commodity sold for about N3,800, the federal government while lamenting the rising prices, attributed the upward price movement to production challenges, adding that it was engaging stakeholders in the industry to address the issue.

Cement prices had since risen by over 50 per cent, despite the assurances by the government to arrest the situation, thereby raising concerns by Nigerians.

The Minister of Industry, Trade and Investment, Mr Niyi Adebayo, had ,urged the public not to embark on panic buying and storage of the product as the current mark

Last week, President Muhammadu Buhari, in the Federal Capital Territory, unveiled what was described as the single largest rice pyramids ever assembled in the country.

The pyramids further marked a watershed in the CBN-led efforts to make agriculture the mainstay of the Nigerian economy again, amidst a seemingly bleak future for the oil economy.

The CBN Governor, Mr Godwin Emefiele, in 2015, at the onset of the Buhari administration, introduced the ABP to curtail excessive imports by enhancing the capacity of local farmers as well as providing them with the hitherto elusive financing to boost food production in line with the president’s directive to grow and eat what is produced locally.

The apex bank had also in a bid to sustain the stability in the foreign exchange regime and ensure efficient forex utilisation, included over 41 items on the list of Not Valid Foreign Exchange at the official channel. The move was aimed at encouraging local production of goods and items which the country has a comparative advantage over to help limit importation which had been detrimental to the economy.

It is a well-known fact that millions of jobs are literarily exported to other countries when the country sustains its appetite for foreign goods.

The neglect of agriculture since the discovery of oil is largely responsible for the current economic predicament Nigeria faces besides its leadership failings and corruption.

Many have also imagined what fate could have befallen the country at the heat of the COVID-19 pandemic when restrictions were applied by various countries to check the spread, leading to severe fiscal constraints for governments oil demand fell drastically and food export was banned by some countries. The CBN ABP which had achieved enormous success over time ultimately saved the day.

Nigerians have commended the Buhari administration especially for its focus on agriculture which appeared to have boosted food security amidst concerns of worsening insecurity in the country.

Though the policy on 41 items restricted from forex allocation was initially opposed by some Nigerians who benefitted from the old system of unbridled importation, the policy can now be likened to the biblical rejected stone which had become the cornerstone in the diversification programme of the present administration.

The ABP had been launched as part of the intervention to compensate for the restriction of forex by boosting local production.

Today, those who criticised the ABP, have suddenly lauded the giant strides so far recorded in record time particularly in the rice revolution.

Many Nigerians confessed that they never believed that local rice would become the dominant staple in the domestic market as well as become the delight of consumers. All thanks to the visionary leadership and foresight of the Emefiele-led CBN.

Between September and October 2021, under the ABP, the bank disbursed N43.19 billion to support the cultivation of over 250,000 hectares of maize, sorghum, soya beans and rice during the 2021 dry season and N5.88 billion to finance six large-scale agricultural projects under the Commercial Agriculture Credit Scheme (CACS).

Cumulatively, the bank has disbursed the total sum of N864 billion to 4.1 million farmers, cultivating 5.02 million hectares. The bank also disbursed the sum of N41.2 billion for the commencement of the brown revolution, a large-scale wheat programme to wean us off imports by 35 per cent in the first year.

Emefiele, nonetheless said, “We are delighted that these efforts have yielded fruits by not just increasing the availability of rice, but also in moderating prices, reducing imports and increasing job creation in the country.”

He noted that these expansions have not only made Nigeria the largest rice producer in Africa but had also unlocked enormous private sector investment in the rice value chain.

He said the number of Integrated Rice Mills grew astronomically from six in 2015 to over 50 in 2021 with many more in various stages of completion.

He added that taking a cue from the success in the rice value chain, the apex bank had also commenced the “Brown Revolution” last year in line with its mantra for the transformation of the wheat value chain in the country.

According to him, wheat remained the third most consumed grain in the country after maize and rice, stressing that the country only produce about one per cent (63,000 mt) of the 5-6 million mt of wheat consumed annually in Nigeria.

He said, “This enormous demand-supply gap is bridged with over $2 billion annual importation of wheat. As a result, wheat accounts for the second-highest food import bill in Nigeria, thereby putting pressure on the nation’s foreign exchange reserves.

“We have concluded the first major wet season wheat farming in Plateau State and planted over 100,000 hectares of wheat across 15 states in the 2021 dry season. This strategic intervention will herald a progressive reduction in our wheat import bills over the coming years.”

Emefiele also added that the CBN established a Strategic Maize Reserve with the stock of maize submitted as loan repayment by farmers, pointing out that this will provide a buffer for price modulation for the poultry and feed mills nationwide.

“The programme was able to stabilise the poultry and livestock sectors during the pandemic and saved the industry and consumers over N10 billion in raw material costs.”

He said, “Our experience over the years has been transformed to the operational efficiency of the programme. We have added several layers of controls to improve transparency and accountability among all stakeholders and what you are witnessing today is a demonstration of our growth and a strong indication of the enormous potential in the country’s agricultural space.

Emefiele, however, noted that the current progress was still a far cry from the desired goal, pointing out that the “growth processes reaffirm our belief in the potential inherent in our agricultural space and we can hopefully harness them to lead the diversification agenda of the economy”.

He said, “The mega pyramids being launched today represents aggregated paddy rice submitted as repayment of loans by RIFAN farmers under the 2020 dry season and 2021 wet seasons.

However, Buhari assured Nigerians that prices of food items especially rice will soon come down, urging them to exercise some patience as the growing food production in the country, especially expansion in rice farming, will eventually bring down prices of food, making it more affordable for all.

While the CBN was celebrating the bumper harvest of rice, a cross-section of Nigerian consumers that spoke with THISDAY wondered why a bag of rice still goes for between N28,000 and N30,000 in the market.

A rice seller in Garki Market, for instance, challenged the government to flood the market with rice to show Nigerians that the rice pyramids unveiled last week were real.

A housewife, Mrs Chizoba Davies, told our correspondent that the markets in Lagos, the commercial hub of the country, are yet to have a feel of the haul displayed in Abuja last week. The mother of three said she bought a bag of rice last Wednesday, at Daleko Market, Lagos, at the cost of N28,000.

“The government should go beyond displaying large stock of rice in Abuja. They should make the commodity available all over the country at a cheaper price for us to take them seriously. We cannot have so much hunger in the country and some people are celebrating what to me, is not the reality on the ground,” she said.