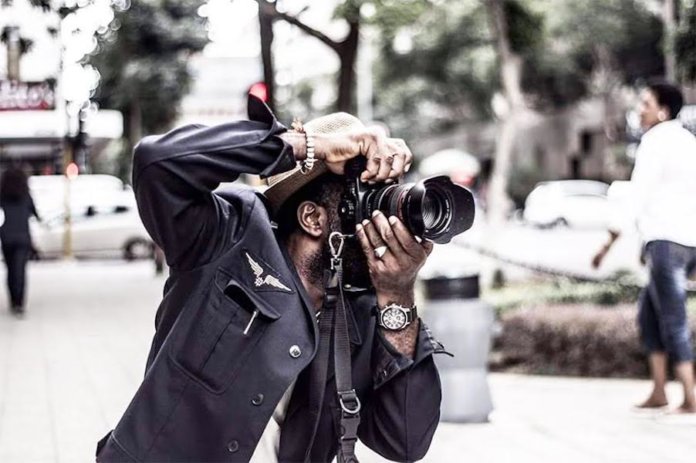 From modest beginnings as a modelling agent, Chriss Aghana Nwobu has, as a self-taught creative photographer, clawed his way from anonymity to recognition as one of the leading photographers in the local art scene, writes Okechukwu Uwaezuoke

Without much ado, Chriss Aghana Nwobu had set to work. He had to take numerous images with his camera – a Canon EOS M 6 – before settling on what by his standards qualified as the best. This was happening not too long after he arrived in his black Hyundai Accent for his scheduled photoshoot session with a client that late Sunday, January 2 morning.

Nwobu, a self-taught professional, seemed keen on turning each of the images taken under the illumination of LED video light into a work of art. His skills honed over the years grew prodigious enough to make him one of the industry’s top guns.

Indeed, the 51-year-old had certainly come a long way. It all began, he recalled, while he was working as a modelling agent and had come across several photographers. As a result, he was able to get to know several of the creative directors of the advertising firms for which he supplied models. “I was able to understand what they were looking out for in terms of image delivery,” he said. “I also realised there was a huge gap between the agencies and photographers, who have great photographic images that could fit into the kind of stock photos that agencies required for their work but do not have the right access to those agencies.”

This influenced his decision to broaden his scope by acting as a go-between for photographers and advertising agencies in need of their services. The constant exposure and interaction with creative photographers and their works reawakened in him a dormant desire to tell visual stories.

Thus, he began to identify and connect with such industry luminaries as Sunmi Smart-Cole, the late Johnson Donatus ‘Okhai Ojeikere, Don Barber and Tam Fiofori. Talking about the latter, a neat weaving of fate seemed to have arranged their meeting. Full of expectations, albeit tempered with a note of trepidation, he sauntered into The Guardian Newspapers’ Lagos corporate office building along the Osodi-Apapa Expressway one late afternoon in the year 2005 and requested to see the then Sunday editor Jahman Anikulpo.

As it turned out, the latter was interviewing filmmaker Chris Obi-Rapu, known in the industry as the “Father” of Nollywood. Nonetheless, he was able to read a letter brought by the visitor, which invited him to attend a photography event, tagged Foto-TalkShop, billed to hold at the then-French Cultural Centre on Kingsway Road in Ikoyi, Lagos. This event aimed to bring together creatives not only to discuss photography but also to raise awareness of the medium as an art form.

After acknowledging the letter, Anikulpo inquired as to who else Nwobu had discussed the photo talk shop project with. During the subsequent conversation, Nwobu revealed his intention to invite the legendary Tam Fiofori to the event, who, by a strange coincidence, was waiting for his friend Obi-Rapu in Anikulapo’s office.

Shown the letter, Fiofori without much ado invited Nwobu over to a meeting place on James Robertson Street in the Lagos mainland neighbourhood, Surulere. This was where he met many of the sub-sector’s crème de la crème.

Among the others, to whom Nwobu affirmed that he also owed a debt of gratitude, were Victoria Azinge, a director of communication at the late Sonny Odogwu’s SIO Group of Companies and Basil Okafor, The Sun Newspaper’s founding art director. His timid first steps in the industry were made easier by the encouragement of both benevolent personalities.

Meanwhile, he got better and better over the years through his active involvement in photography, not only by viewing the works done by others but also by creating and telling his own story. With his improvement, he naturally became more confident in his visual vocabulary. “I was also fortunate to work with a diverse range of international documentary filmmakers, first as a fixer and then as a researcher, producer, and manager for several major production companies, including Vice Media, H.B.O., BBC, Canadian Broadcasting Corporation, Channel 4 UK, National Geographic, and many others too numerous to mention,” he disclosed.

Travelling with the Nigerian Amputee Football team to Accra, Ghana for one of their tournaments was one of his most memorable moments as a creative photographer. There, he saw firsthand how resolute the human spirit could be when dedicated to a cause in which it believes. Cramped in a Toyota Hiace minibus with these young physically-challenged men on the journey from Lagos to Accra, watching them train and eventually play against teams from other countries gave him reasons to look at life differently. Greatness, he soon realised, slumbers in the human spirit regardless of his circumstances.

Then there was Invisible Borders, a photographers’ collective. As one of its ten founding members, he participated in its inaugural trip from Lagos to the Malian capital Bamako for the photography biennale in 2009. Nwobu described that first trip as “very challenging” and “eye-opening.” Nonetheless, it paved the way for the second trip to Dakar, Senegal in 2010 for the Dakar Art Biennale, dubbed Dak’ Art, and subsequent trips. Following that trip, many of the group’s founding members stood down to allow newer photographers to participate and contribute to the African narratives. “I am always proud to be a part of that project that set the stage for many young creatives from various parts of the African continent to tell and show the world a different Africa from what the western mainstream media have always portrayed.”

The photography collective, by the way, was founded as a platform for its members to add their voices to issues bordering on African colonial demarcations and to challenge Western stereotypes about Africans.

Moving on from the Invisible Borders, Nwobu had since become involved in several projects. His biggest so far, according to the award-winning photographer, is the series, he titled called Power, Religion and Politics, which have shown as part of the ReSignification exhibition in Havana, Cuba from May 9 to June 5, 2017, and a few months after in New York, US. He would later speak about the project during a ReSignification Conference in Johannesburg, South Africa and held yet another exhibition in 2018 during the Manifesta 12 in Palermo, Italy.

The Anambra State-born artist also manages a media production company in addition to owning and operating an art space named Ikollo House/Gallery in AVERA Estate, adjacent to the Lagos Business School in the Ajah area of Lagos. “We research, produce, and create different video contents, particularly in the documentary genre, while maintaining our services with our existing clients in the broadcast industry,” he said of the studio. “We’re also looking into new areas for different home entertainment digital content productions that will be released soon.”

Nwobu, who once won the Best Photo Story Award category at the 2012 Intimate Lens Ethnographic Film and Photography Festival in Caserta, Italy, was also a nominee for Prix Pictet Award 2013 in Switzerland.

Through his works, he ventures into such areas that others would rather avoid as religion and cultural anathemas. He also appropriates objects such as the African mask, calabash chalk (called nzu in Igbo), costumes, and whatever else he deems relevant in his works. “I work a lot with human forms and figures,” he said. “I’ve always been fascinated by sculptural pieces, particularly those of African figures, and I see the human figure as another type of architectural piece, albeit a unique one.”