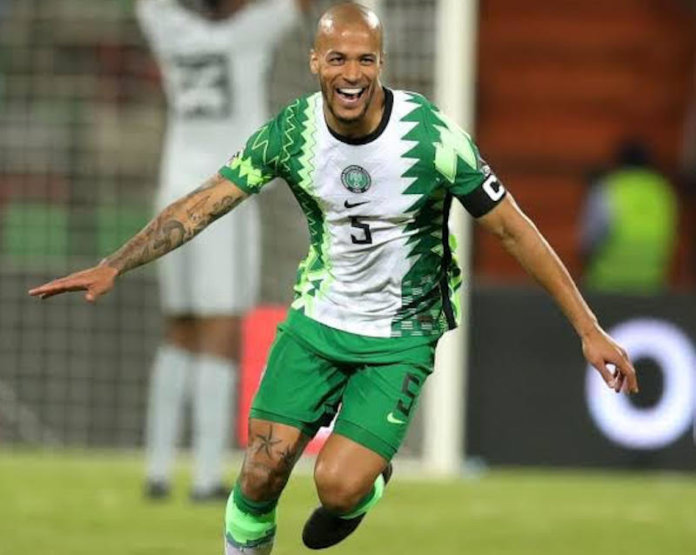 On-field Captain of the Super Eagles, William Troost-Ekong, has spoken of his delight at Nigeria’s 2-0 Africa Cup of Nations triumph over Guinea-Bissau but says he is now focusing on the title.
Goals from Sadiq Umar and the Watford star propelled the Super Eagles past the Djurtus – who needed a win to scale through to the Round of 16.

While lauding his teammates for keeping their winning streak intact, Troost-Ekong said it’s time to gun for the title to make up for their AFCON 2019 disappointment.

“I want to win the tournament this time, the last tournament in Egypt we managed to win bronze and missed out on the final,” the 28-year-old told reporters in Garoua shortly after Nigeria recorded maximum win of Group D on Wednesday night.

“That was upsetting for most of us. This time around, we want to do better, there is a long way.

“The only thing we can guarantee is our effort and try to put in some good performances.”

Troost-Ekong marshalled Nigeria’s backline effectively and scored the second goal in the 75th minute – a feat which earned him the man-of-the-match award.

Nevertheless, he attributed his accolade to his teammates as well as the technical crew for trusting the players and getting their tactics right despite parading a starting XI that boasts eight new players.

“I am happy, it’s not all about me, the best thing is that the boys did very well. We made eight changes and still looked fantastic,” he continued.

“That’s massive to the coaching staff for trusting the players and also the boys who stepped in to show themselves.

“I try to contribute to every game and do my best. I am very happy.

“There was no different way to prepare. The good thing about it is that I trust my teammates and they also do the same to me.

“The coaching staff also trusts all the players. It was the same preparation, as usual, some of the players were rested after playing two difficult games in six days.

HOW THEY FINISHED THE GROUP STAGE

After 13 days of matches at the on-going AFCON tournament, the first free day of the tournament is today after the completion of group phase matches last night. While 16 teams are left in the tournament, today naturally serves as rest day and start of planning for trips out of respective cities to new destinations. All the eliminated teams must check out of their hotels and set for journey back home or to clubs in Europe and other parts of the world from where some of the players trooped into Cameroon for the AFCON.

*A Day of Penalty Misses

The final day of the group stage matches in Group E and F will go into record book of missed penalty opportunities. Although penalty chance seems to be the clearest opportunity to getting a goal scored but yesterday final matches proved otherwise as a total of three chances were missed. First, it was Algeria with an opportunity to reduce the three-goal tally conceded to Ivory Coast but inspirational captain Riyad Mahrez missed. Then came in the other group match between Equatorial Guinea and Sierra Leone, Kie Ansu Kamara missed from the spot for the team from Freetown and allowed Equatorial Guinea to maintain the lone goal score line till the end of the match. Tunisia’s Seifeddine Jaziri also failed to convert a penalty against The Gambia on the dead of first stanza.

The beauty of tournaments is usually when there are upsets. The on-going AFCON 2021 event has brought out the best out of perceived minnows and made some tournament favourites to lose their bragging rights. At the end of the group phase that ended last night, five matches proved worth mentioning. Namely; when the defending champion, Algeria was forced to a goalless draw by Sierra Leone; Ivory Coast’s 2-2 score-line with Sierra Leone; Ghana’s 2-3 loss to Comoros; Guinea’s 1-2 loss to Zimbabwe and Equatorial Guinea’s lone goal win that broke the 37 unbeaten runs of Algeria since 2018.

The defending champions have fallen from 37-match unbeaten run dating back to 2018 through when they won the AFCON tournament in 2019 to ground zero. The law of gravity suddenly sets in as the former powerhouse now become the losing side. After the upset from Equatorial Guinea four days ago, the must-win match against Ivory Coast turned into total nightmare. Now , the Algerians will need to rebuild ahead of the World Cup playoffs coming up shortly or stay down in ignominy.