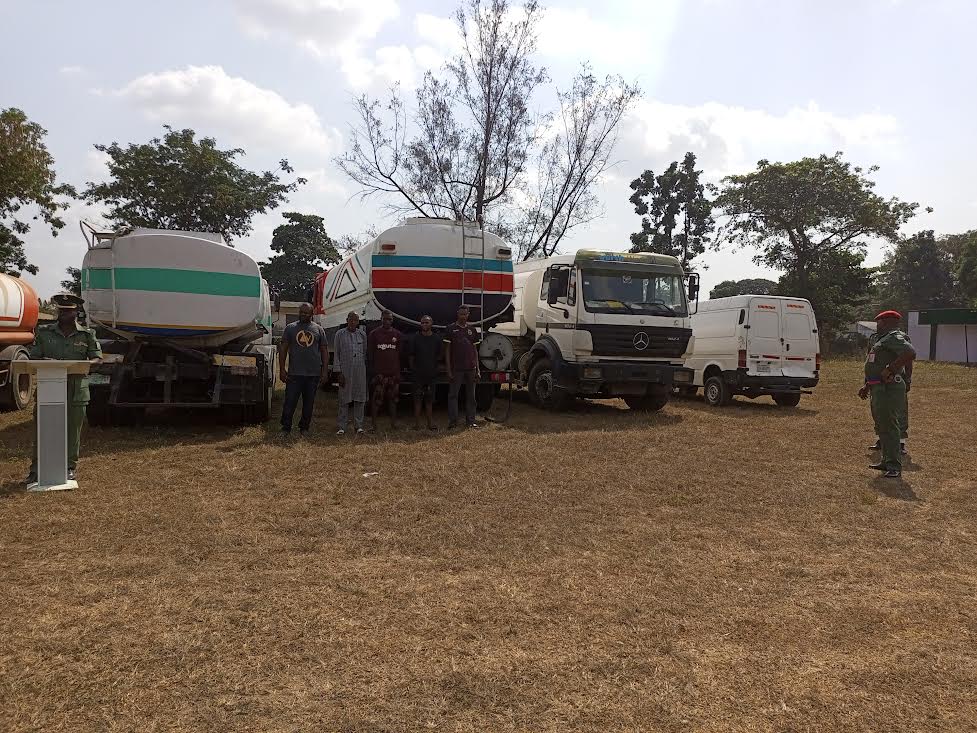 Chiemelie Ezeobi writes that the gains of Operation AWATSE, a joint taskforce established to tackle the menace of pipeline vandalism, were again brought to the fore when the 9 Bridage of the Nigerian Army unearthed an illegal bunkering depot at the Oregun area of Lagos. Five suspects were arrested while four petroleum tankers and five ford vans with stolen products worth N300million recovered

When Operation AWATSE was set up in 2014, it was targeted at curbing the menace of pipeline vandalism in the South-west region. Set up as a Joint Task Force (JTF), it comprises the Nigerian Navy, the Nigerian Army, that Nigerian Air Force, the Department of State Services and the National Security and Civil Defence Corps (NSCDC).

An Hausa word for ‘Scatter’, the operation recorded so many successes and it was taken over by the Defence Headquarters and its initial mandate, which was the protection of NNPC pipelines and infrastructure along 72km stretch of pipelines from Atlas Cove to Mosimi Depot, was expanded to include security of Epe and Ogun Waterside in Lagos and Ogun States, respectively as well as anti-kidnapping, anti-robbery and related criminal activities.

Recently, its gains were again brought to the fore when the 9 Brigade of the Nigerian Army has uncovered an illegal oil bunkering depot in Oregun, Lagos, where siphoned stolen crude oil is refined and transported to willing buyers.

Parading the suspects in Ikeja, the Operations Officer, 9 Brigade, Major Tarela Emuren, said the arrest and recovery were made by operatives of Operation AWATSE, after an eight- hour raid operation at the illegal bunkering site on January 12, 2022.

He said: “Operation AWATSE, in line with its mandate has continued to curb the menace of pipeline vandalism, oil theft and illegal bunkering activities within the South West Geopolitical Zone.

“In pursuant to this mandate, the force discovered an illegal oil bunkering depot around Oregun, Lagos and conducted a raid operation at the site.

“During the operation, which lasted for about eight hours, the troops arrested a total of five suspected illegal oil bunkerers and confiscate five Ford Vans. It will interest you to note that the Ford vans have been specially modified, without due recourse to safety, to accommodate locally fabricated tanks for storage of stolen petroleum products.

” Additionally, four tankers were also recovered at the illegal depot laden with suspected stolen products as well as several drums, hoses and other equipment used by these economic saboteurs.

“Beside the economic loss occasioned by the activities of these criminal, the safety concern is also worrisome. The location constitutes serious dangers to others law abiding residents within the community while their activities result in environmental degradation, pollution and heightens the risk of fire outbreak.

“Also, the crude modification of vehicles used in conveying these highly inflammable products constitute even greater dangers to other unsuspecting road users in Lagos and other places the products may be transported to.

“The scale of economic sabotages orchestrated by this unscrupulous act is estimated to worth about 300 million naira. Regrettably, these activities have been ongoing for quite some time without the knowledge of relevant government agencies.

“Let me therefore use this opportunity to reiterate the commitment of Op AWATSE to curbing all oil related criminal activities within the South-west Geo-Political Zone.

” I therefore call on all law abiding citizens to join the fight against these unpatriotic elements amongst us by volunteering intelligence or information on suspicious activities observed within your localities.

“By this token, appropriate security agencies will be able to take actions to
check some of these illegalities thus ensuring that the environment remains conducive for genuine businesses with compliance to relevant safety procedures.

“While we continue to pursue our mandate, we assure you that the joint force will continue to abide by all relevant code of conducts and ensure highest professional etiquette in the conduct of our operations as enshrined in our Standard Operating Procedures.

“However, the force will like to sternly warn those still engaged in this unwholesome practice to desist forthwith. We will not rest on our oars till all perpetrators of these heinous crimes are brought to book.”

At the end, all five suspects and recovered exhibits were handed over to the NSCDC for further investigation and possible prosecution.