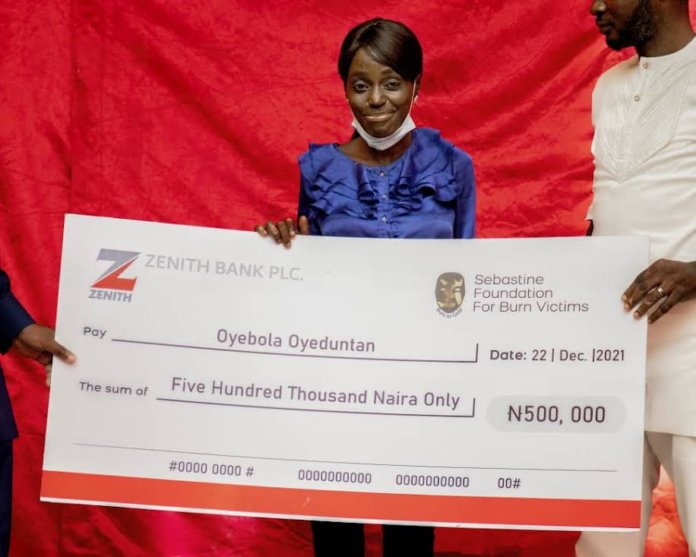 Sunday Ehigiator writes on how a newly launched foundation, ‘Sebastine Foundation for Burn Victims’, is helping burn survivors to live a normal life with various empowerment plans targeted at turning their ‘burns to gold’

According to the World Health Organisation (WHO), burns are a global public health problem, accounting for an estimated 180,000 deaths annually.

The majority of these occur in low- and middle-income countries and almost two-thirds occur in the WHO African and South-East Asia regions.

Hence, WHO recognises non-fatal burns as the leading cause of morbidity, including prolonged hospitalisation, disfigurement, and disability, often with resulting stigma and rejection.

Burns are also among the leading causes of Disability-Adjusted Life-Years (DALYs) lost in low and middle-income countries.

According to WHO, in 2004, nearly 11 million people worldwide were burned severely enough to require medical attention.

Burn injuries continue to be a major source of mortality and morbidity in low- and middle-income countries of the world, of which Nigeria is a part.

According to information from the National Center for Biotechnology Information (NCBI), “the available statistical data on burn epidemiology are predominantly hospital-based.

“Burn injuries account for 4.8 per cent of trauma deaths in Nigeria and 6.7 per cent of surgically related deaths.

“In children, burns and scalds are the fourth commonest cause of trauma after road traffic accidents, accidental falls, and bites.

“In South-western Nigeria, flame burn accounted for 65-71 per cent of burn injuries in Ile-Ife. Flame burn disasters in the recent past have contributed to an increase in the incidence of flame burns. Many such reports were from southern Nigeria.

“Disasters have also occurred owing to deliberate damage, the pilfering of gasoline from underground pipelines, and the contamination of kerosene, a common household fuel, by gasoline during storage or transportation.

According to Nations Wide Children Health Library, burns are classified as first, second, third, or fourth degree, depending on how deeply and severely they penetrate the skin’s surface.

“First-degree (superficial) burns affect only the outer layer of skin, the epidermis. The burn site is red, painful, dry, and with no blisters. Mild sunburn is an example. Long-term tissue damage is rare and often consists of an increase or decrease in skin colour.

“Second-degree (partial thickness) burns involve the epidermis and part of the lower layer of skin, the dermis. The burn site looks red, blistered, and may be swollen and painful.

“Third-degree (full thickness) burns destroy the epidermis and dermis. They may go into the innermost layer of skin, the subcutaneous tissue. The burn site may look white or blackened and charred.

“While the fourth-degree burns go through both layers of the skin and underlying tissue as well as deeper tissue, possibly involving muscle and bone. There is no feeling in the area since the nerve endings are destroyed.”

Consistently, burn survivors have reported limitations in health-related quality of life, as well as the ability to be psychologically and physically independent, compared to the general population norms.

These realities informed the decision of Sebastine Foundation for Burn Victims to provide a platform for economical and psychological empowerment for the survival of burn victimd, by making them see themselves as a raw gold that has gone through the fire and is now refined in its best form, instead of a victim of burn.

Launched on December 22, 2021, by a burn survivor himself, Sebastine Enechi, the foundation is said to be primarily focused on improving the quality of life of burn victims across Nigeria and other regions of Africa.

At the official launch in Lagos, N500,000 education scholarships were each presented to two survivors, Oyebola Oyeduntan, and Michael Odinnachukwu, while another N500,000 was presented to the Burns and Plastic Department of the National Orthopaedic Hospital Igbobi.

Speaking to THISDAY, Enechi said, the foundation was aimed at helping burn survivors like him fit back into society.

“We want to help them look beyond their looks and scars and believe that they can do more regardless of the conditions they find themselves in.

“We plan to support them physically, morally, and financially, provide medical diagnosis treatment, post-treatment support, and scholarship. We want to encourage them to keep seeing the brighter part of life.”

He added that the foundation would put in place yearly projects aimed at reaching out to survivors of fire accidents to help them stabilise and fit again into society.

“Part of the ongoing plan is to collaborate with government organisations, hospitals like burn centres, the Red Cross, Fire Service Commission, private organisations, and the general public.

“With collaborators on board, the foundation will be able to work out programs that will help uplift the lives of burn survivors while reaching out to the victims in burn centres across Nigeria.”

On funding, he disclosed that the foundation was currently funded by him, however, also open to sponsorship and support from family, friends, and any organisation or individual who wish to be a part of the course.

“Alerzo, a technology, and service platform, has so far provided support for the foundation. Likewise, special appreciation goes to WapTv and De Kathedra for also contributing their fair quota towards the success of the launch event.”

Speaking on ways to prevent burns, Enechi who became a burn survivor after falling victim to a fire incident that occurred at a restaurant he had innocently gone to eat before a leaking gas exploded at the restaurant, advised the government to improve awareness on how to avoid fire disasters.

He also advised the government to develop and enforce effective policy aimed at saving lives and properties of people in the country, providing burn prevention programs, strengthening burn care, and capacities to carry out all of the above.

“We want to help them look beyond their looks and scars and believe that they can do more regardless of the conditions they find themselves in. We plan to support them physically, morally, and financially, provide medical diagnosis treatment, post-treatment support, and scholarship. We want to encourage them to keep seeing the brighter part of life”