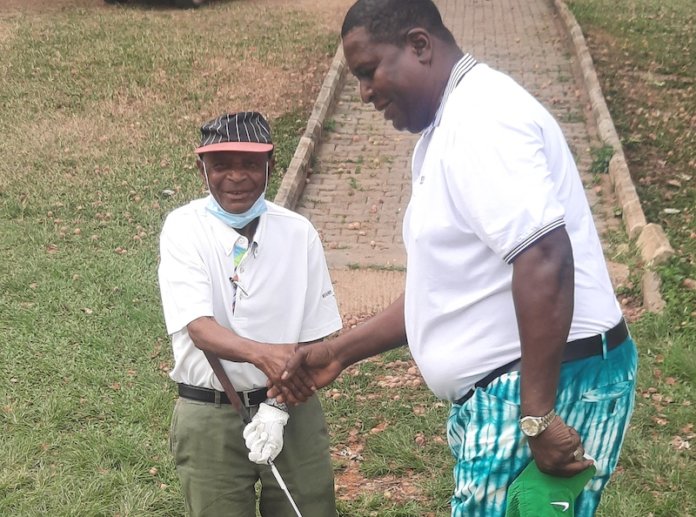 The Nigeria Golf Federation (NGF) has unveiled the oldest Nigerian to be playing the game of golf.

London-based Pa James Olujobi Omolaso was presented by the NGF led by Otunba Olusegun Runsewe, when he was playing a few holes at IBB International Golf and Country, Club, Abuja.

Pa Omolaso, who turns 95 next month, was a foundation student of Molusi College, Ijebu-Igbo and regularly plays at Greenwich Estuary Golf course near 02 Arena, London.

He plays golf off Handicap 28 and has been playing the game for the past 35 years.

Speaking on why he plays golf, Pa Omolaso said that he feels stronger each time he plays the game, adding the game is unlike other sport because it can be played continuously.

“Normally, I do exercises, play and watch television and do pep talk with my children. I also watch Formula 1 as well as flip to nearly all sports channels. Generally, I am interested in sports, because I was a sports person in my college in those days at Molusi College Ijebu Igbo. I was one of the foundation members of the school,” Pa Omolaso recalled.

He advised people seeking to live longer to eschew excessive drinking, drugs and philandering, adding they must also exercise as well as do basic things like caring for others.

Pa Omolaso, whose least handicap attained was 27, said that whenever he visited Nigeria with his son, he usually liked to come and watch golf at the challenging Abeokuta layout, Abuja and the flat terrain of Ikoyi Club 1938.

He tasked Nigerian professional golfers to work hard and exhibit confidence, noting they will become international items like Tiger Woods if they inculcate those attributes.

The President of NGF, Otunba Runsewe, who discovered the nonagenarian, urged Nigerians to key into the game of golf as it can be played at any age.

“Pa Omolaso is 95 and still comes to the course to play some few holes and make some putts. The fact that Baba has mental alertness and understands what golf is tells us that golf is an ageless game. Today, he has demonstrated something: that when you hit a good golf shot, your entire body chemistry communicates.

“I appeal to all Nigerians to disabuse their minds from that notion that golf is for the elite. Golf is for the living mind—anyone that is alive, golf is the right game to tap into. I screamed when I saw Baba and I resolved that what we needed to do was bring him to the golf course,” Runsewe said.