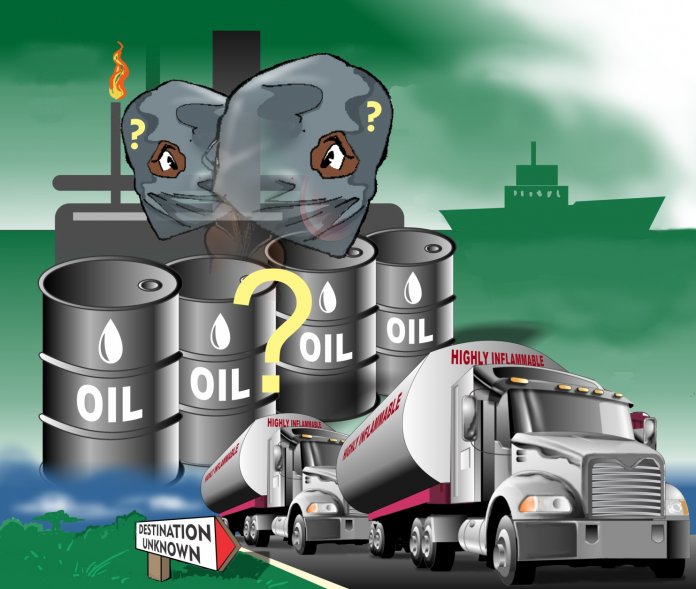 Some monarchs and civil society groups in the Niger Delta have dragged the National Assembly to the Federal High Court in Abuja, seeking a restraining order in the continued use of the 1999 constitution in the operations and exploration of the crude oil in the region.
The monarchs and civil society groups who alleged rights violations, urged the Federal High Court to direct and mandate the use of 1963 constitution in the adjudication and operations of crude oil in the oil rich Niger Delta area.

The suit which filed on January 10, 2022, by the Peoples Confederal Constituents Assembly Of Nigeria (PECCAN) before the Federal High Court, Abuja with Suit No. FHC/ABJ/CS/18/2022 and a motion restraining the defendants – President of the National Assembly, Clerk of the National Assembly and the Chairman Senate Committee on Constitution Amendment, from further engaging and using amendment of the 1999 constitution in the present democratic setting.

The monarchs and civil society groups described the 1999 constitution as instrument to oppress, dominate recolonise, abuse and seize up the applicants minorities rights of ethnic nationalities in Nigeria to own and use their properties and natural resources as protected and enshrined on the agreed terms as enshrined in the referral foundational and existing 1963 republican constitution and Nigeria`s ground norm.

According to a statement and affidavit deposed by the General Secretary of PECCAN, the umbrella body of the Niger Delta and Civil Society, Chief Wombu Bolus in SUIT NO. FHC/ABJ/CS/ / 2022 listed as applicants to the suit to include: King Oziwe Amba Albert (Regent King of Diobu Kingdom, Delta Nigeria), Chief Wombo Bulus, Karim Sekanobi, Chief James Onyi Kokomi, Danjuma Modu
(For themselves and Representing the Peoples Confederal Constituents Assembly of Nigeria (PECCAN), Center for Probity and Democratic Studies, while the President of the Senate and National Assembly of Nigeria, Clerk of the National Assembly, the Chairman Senate Committee on Constitution Amendment were listed as the respondents

Among other things, the group sought, “A declaration that the respondents continued use operation and continuing amendments of the purpose expired military decreed transitional constitution, No.24 of 1999 without re-adopting, reverting and restoring to the existing people made 1963 Republican Constitution at the military transfer of power to civilian democratic rule since 1999, creates a constitutional vacuum and force majeure violation the applicants minorities rights to belong united country and be governed by the agreed terms of the union of Nigeria as contained in referral 1963 republican constitution and applicants fundamental rights to own and use their natural resources on their native land/region as protected under the African charter on human and people right, UN charter and International covenant on civil and political right to which the federation Nigeria is a member signatories.

“A declaration that the respondents continued use operation and further amendments of the military decreed transitional constitution of No. 24 of 1999 otherwise called General Abusalami Abubakar constitution to supplant the existing 1963 republican constitution and ground norm bearing and reflecting in whole the agreed foundational terms/structure of the Nigeria union including incorporated willinski’s commission minorities fears report of 1957 preceding 1960 Independence is unconstitutional, illegal and constitutes a violation of the applicants protected fundamental rights not to be dominated and recolonised using respondents continued amendment of the purpose expired military decreed transitional constitution as cover.

“A declaration that the respondents continued amendment of the military decreed transitional constitution of Decree No. 29 of 1999 long after transfer of power, to use as cover and instrument to perpetuate the present military unitary styled oppressive and suppression rule constitute a flagrant violation of the applicants protected fundamental rights of existent and to be governed by agreed terms and will of the peoples made constitution and not to be oppressed or dominated by the majority ethnic groups in an independent democratic sovereign Nigeria including forceful seizure and naturalisation of the applicant’s prosperities, wealth and Natural resources of oil wells and mines, contravenes the enshrined provisions of Articles 20, 21 and 22 of the African charters on Human and peoples right Articles 15 and 17 of the United Nation charter on universal Declaration of Human rights, International covenant on civil and political rights, binding on Nigeria as a signatory member state.”

Among others, the Niger Delta communities argued that the continued use of the phrase, “we the people” without the applicants’ ethnic nationalities, consent approval or “Yes” referendum on record, constituted a ploy to cover up, deceive and engage in using the military oppressive decrees/laws to recolonise and trample on the minorities’ rights in the foundational existing peoples’ made 1963 Republican constitution as provided and guaranteed under Articles 1,4,1,2,24,&26 of the African charter on Human and peoples’ rights and the United Nation Universal Declaration of Human rights to which Nigeria subscribed and is signatory to.

In this regard, they sought, “an order directing and compelling the respondents, their servant, agents and or privies however constituted or named to re-adopt, return and restore to full operation with necessary amendment the partially military suspended and lifted foundational peoples’ made 1963 Republican constitution and ground norm embodying the agreed terms, governance structure and basis of a united Nigerian independent sovereign state for the unity, progress and peaceful co-existence of all ethnic nationalities including the applicants’ protected minorities rights in the 1963 Republican constitution with necessary amendments.”

Others included the award of N1 trillion damages against the respondents for their illegal and reckless dereliction abandonment and abuse of their legislative duty in the use and engagement in unwarranted and unconstitutional amendment of the expired military decreed transitional constitution as covered an instrument to oppress, dominate, recolonized and seizure of the Applicants protected rights to properties wealth and natural resources for their personal and sectional/ class gains.