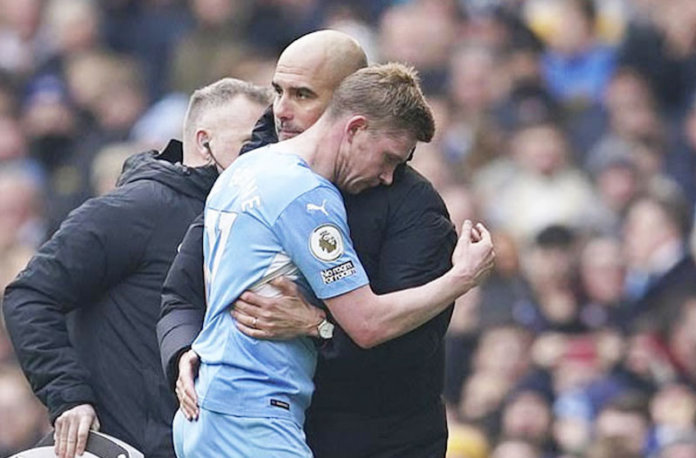 The former Chelsea player broke the deadlock in a tight game with a superb curling drive past keeper Kepa Arrizabalaga with 20 minutes left to extend City’s lead at the top of the table to an imposing 13 points.

Chelsea had their chances, the best coming when Ederson saved from Romelu Lukaku in the second half but De Bruyne made the difference and City now also have a 14-point advantage over Liverpool, who have two games in hand.

City deserved the win for their greater urgency and possession, Kepa keeping out Jack Grealish with a first-half save, and this represents another significant stride in their quest to retain the Premier League crown.

Coutinho was just about to be introduced by Villa boss Gerrard midway through the second half when Bruno Fernandes slammed home his second goal of the game off the underside of the bar.

But the Brazilian proved the catalyst for a memorable response.

First he drove at the United defence, helping to create the space which Jacob Ramsey exploited to halve the deficit.

Then Ramsey slid over an excellent cross from the left which Raphael Varane was unable to intercept as he slid back, leaving Coutinho to finish into an empty net.

The goal brought celebrations at both ends of the pitch as Emiliano Martinez also went into the crowd in relief – it was the Argentine’s horrible sixth-minute error that had gifted Fernandes the visitors’ opener.