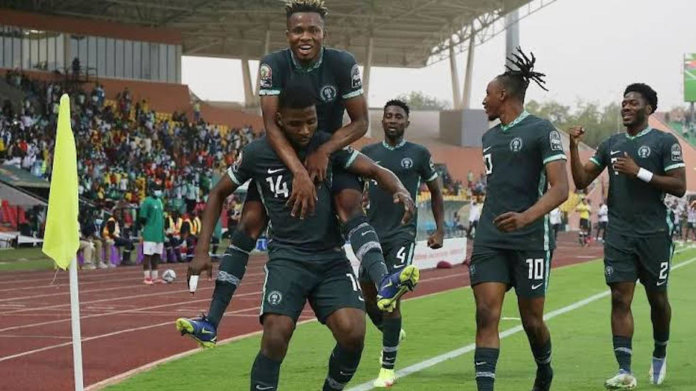 President Muhammadu Buhari has hailed the Super Eagles of Nigeria for an impressive start at the ongoing 33rd Africa Cup of Nations (AFCON) in Cameroon, defeating seven-time champions Egypt 1-0 in their opening Group D encounter on Tuesday in Garoua.

The President, according to a release issued on Wednesday by his Media Adviser, Femi Adesina, strongly believed, like millions of football-loving Nigerians, that the spectacular outing in Garoua, Cameroon is a foretaste of what to expect from the dedicated team as they square up against Sudan and Guinea Bissau in their remaining group stage phase of the tournament.

He, therefore, urged the Ahmed Musa captained to keep their eyes on the ball, remain good ambassadors on and off the field, and give loyal fans and all Nigerians more exciting moments to celebrate.

President Buhari assured the team of his unflinching support as the team coached by Augustine Eguavoen continue to soar like an eagle to write another chapter in the annals of Nigeria’s rich football history.

When host, Cameroon take on Ethiopia this afternoon in attempt to reach the second phase of the tournament, it will be the second time both teams will meet in AFCON history. The previous meeting was at Group Stage of the 1970 tournament. Cameroon won 3-2.

The controversy in the clash of two Eagles, that is Carthage Eagles of Tunisia and Eagles of Mali, no doubt is a bad public relation for the premier continental football showpiece. Mali won by penalty goal scored in the early minutes of the second stanza but Zambian referee, Janny Sikazwe is the first man in the world to blow his whistle twice for full time before the end of 90th minute. Shame.

Cameroon is unbeaten in their last seven group stage games at the Africa Cup of Nations (W3 D4), since their last such defeat in January 2015 (0-1 against Côte d’Ivoire).

Having scored in his last two Africa Cup of Nations appearances (three goals in total), Cameroon’s Vincent Aboubakar is looking to become the first player to net in three consecutive games in the tournament for the Indomitable Lions since Samuel Eto’o in January 2008 (five in total).

The tournament is still maintaining low score win because no team yet to record more than two goal margin wins. This means, the quest to beat the 52-goal record at the last edition may be far from reality following penalty misses by Wahbi Khazri of Tunisia and Pele’s for Guinea Bissau in the goalless outing against Sudan. Only Cameroon scored more than one goal in the 12 goals scored in the first matches of the six groups.