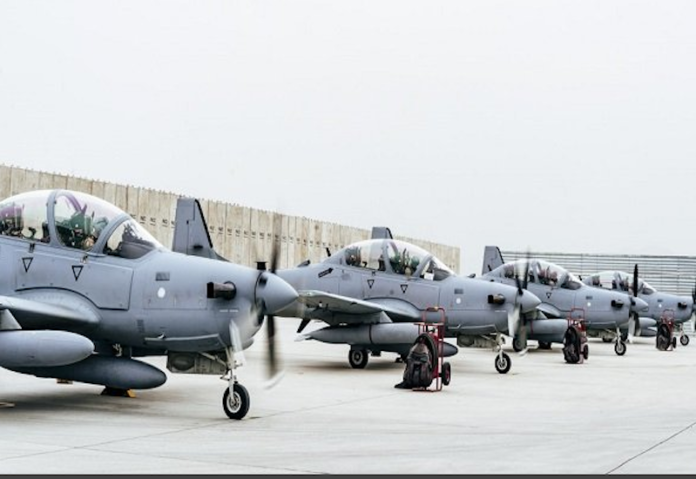 The Nigerian Air Force is yet to receive official directives to deploy the Super Tucano fighter jets against armed bandits wrecking havoc in the North-western part of the country, THISDAY has learnt.

The killings were believed to be a reprisal attack by the bandits in 10 villages in the state following military operations that decimated scores of the bandits including their top commanders in the area.

By the purchase agreement with the United States and international convention, a militant group must be designated “terrorists” before the fighter jets could be deployed against it.

Justice Taiwo Taiwo of the Federal High Court in Abuja on November 26, 2021, granted an ex parte application by the federal government for Yan Bindiga (Hausa word for gunmen) and Yan Ta’adda (Hausa word for terrorists) to be declared as terrorists.

Speaking in a media interview, the Attorney-General of the Federation (AGF), Mr Abubakar Malami, said the armed bandits, have by their activities, become a threat to the nation and, therefore, satisfied the requirements to be declared terrorists.

This is coming as the Chief of Air Staff (CAS), Air Marshal Oladayo Amao, stated that for personnel of the Nigerian Air Force (NAF) to be combat ready and operate at optimum level to counter both domestic and foreign threats, the need to review the curriculum of its training institutions and facilities had become expedient.

THISDAY gathered that the Nigerian Air Force is yet to receive any directive to deploy the tucano jets although other fighter jets within its arsenal had conducted reconnaissance missions and bombing raids in the North-west.

A security source, who spoke anonymously, said the air force was yet to receive any official communication to that effect.

“There is a chain of command. The air force is yet to receive any go ahead with the regard to the super tucano aircraft.

“They have heard about the court pronouncement and the move to gazette same but there is no official communication”, the source said.

“There is a chain of command. The Presidency will communicate the Ministry of Defence, who in turn communicates the Chief of Defence Staff, who will also direct the three services.

“So far, there is no such directive but that does not mean that ongoing military operations in the North-west have stopped”, the source further said.

Meanwhile, the Chief of Air Staff (CAS), Air Marshal Oladayo Amao, has said that for personnel of the Nigerian Air Force (NAF) to be combat ready and operate at optimum level to counter both domestic and foreign threats, the need to review the curriculum of its training institutions and facilities had become expedient.

The CAS stated this at the winging ceremony of some pilots and operators held at the NAF Headquarters, Abuja.

He also stated that the training curriculum for NAF cadets at the Nigerian Defence Academy reviewed and a new criteria specified for NAF officers to be eligible for posting to the academy as instructors.

Also affected are some selected ground and flying schools.

“I have authorised the audit of selected institutions in the NAF, including flying schools, by a team of experienced retired senior officers with a view to upgrading the practices and facilities at the institutions to meet international standards and best practices”.

He went further to state that special arrangements were made to upgrade operations training facilities to enhance the operational capacity of NAF operators in anticipation of increased tempo of air operations with the recently acquired platforms, while sustaining capacity building programmes for the NAF Regiment in joint efforts for synergy of air-ground integrated operations with sister services.

“Overall, these efforts were geared towards positioning the institutions and facilities as centres of excellence that would produce pilots, engineers, technicians and other specialists that are well equipped to carry out their constitutional roles more effectively and efficiently”, it said.