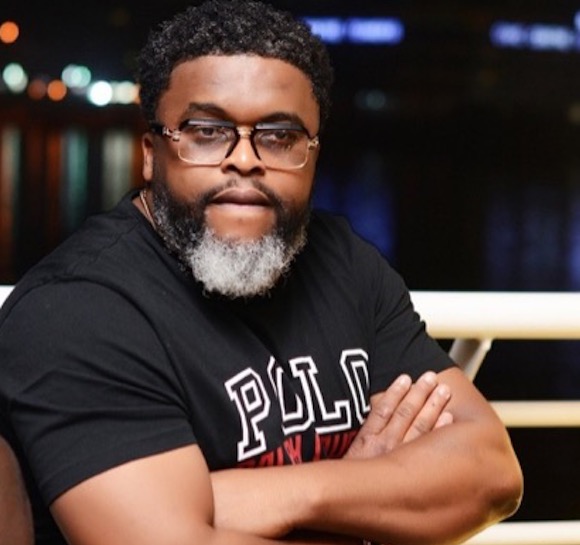 His name evokes admiration and respect in the music industry, owing largely to the enigmatic charm that wraps around him like a warm embrace. Yet, when the hitmaking singer-songwriter Larry Gaaga lets his guards down, he is engaging with a good sense of humour. Vanessa Obioha writes about her recent encounter with him, offering snippets of his life and music career.

He does not like granting interviews. Larry Gaaga reminded us midway into the impromptu conversation on a cozy Tuesday evening. We were at the residence of the U.S. Consul-General who was hosting the creative industry. The gathering at the serene courtyard was engulfed in an ambience of camaraderie. Everyone knew one another and secretly sized up themselves, as stars often do.

It was a good place to mingle with the Nollywood stars and other celebrities, particularly those who hide behind the scenes. Gaaga falls into this category. With over a decade in the music industry, producing hits for artists who trust his musical judgment, it wasn’t until 2017 that his name became synonymous with hit songs, starting with 2Baba’s ‘Gaga Shuffle’ single.

We spotted him having a chat with a colleague and for a moment, we debated if he would grant our request for an interview, with the majority of us kicking against the idea. Yet when a female colleague and I approached him, voila! It was an amiable Gaaga that smiled and led us to a corner, away from the blaring speakers and chatter. It was one of those rare moments the music producer and songwriter tucked away his diffidence, unlocked the gates of his private world and gave us a sneak peek. He revealed his engaging persona with a good sense of humour.

Gaaga who was born Larry Ndianefo (though Gaaga is also a real name) has mastered the art of mystery. His enigmatic presence is often seen in music videos where he dons a godfather look accentuated by glasses, a cigar hanging from his lips, and beard sprinkled with grey hairs. Some may even argue that he is indeed the godfather of hits. Think of his collaboration with Davido on ‘Doe’ or his latest song ‘Egedege’ featuring the Queen of the Coast, Theresa Onuorah, Flavour and Phyno. Gaaga recounted how an unusual meeting with the highlife singer Onuora led to the collaboration.

“I actually went for a burial. Was just sitting with my friend and there were kids around me hailing my name. Then the lady Theresa Onuorah walked in. And I remember her very well. Growing up, my dad used to have this turntable. In fact, he recently sent it to me. I saw kids shouting her name. I was surprised that she was still alive. Randomly, I told myself that I would do something with this woman.”

When Onuorah heard of Gaaga’s intention, she called him and agreed to work with him. For the Anambra State indigene, working with Onuorah was a huge opportunity and he knew he needed to hit the right spot. So he listened to all her songs and picked one of his favourites.
“To think that while growing up, I used to be scared of this song,” he revealed with amusement. “There is this thing about her voice that just scared me.”

It took Gaaga over seven months to round off the production. Even though the song is one of the massive hits of the year, garnering millions of streams on different platforms, Gaaga is yet to acknowledge the song’s success.
“I know it’s big. But you know I’m used to hits. I don’t know, I have not felt it deep down inside like how I should but in the east, I think it’s very big because the messages I’m getting from the east are overwhelming,” he said.

His response is somewhat expected. Describing himself as a perfectionist, Gaaga doesn’t rush his music production. It may take him a year or more to make hits but when he does, it is always a ‘banger’. Most of his songs take seven months to produce, just to ensure that they have the right flavour.
“I’ve always been like that. Everything I do, I do it well. I really take my time to make music. For this song, there was a lot of back and forth because she was based in the east.”

With an eclectic taste in music, his ears for good sounds made him the go-to guy for hit records. He could easily tell whose voice would be good for a beat just by listening. Therefore, when it came to deciding who to collaborate with for the ‘Egedege’ song, Flavour and Phyno were his top choices.

He expressed excitement that the highlife genre is trending at the moment and wished some of the legends like Osita Osadebe and Oliver de Coque were still alive. Who knows, he may have performed wonders with them.

Even though his name is on almost every lip, not a few still believe that Gaaga dropped from the sky with a jukebox. But the alumnus of the University of Lagos has been making music since the 2010s. His career in the entertainment industry started with his management of the rapper Vector at the record label YSG. However, things went awry and he couldn’t achieve much with the artist. He further disclosed that he grew up in the same neighbourhood with the defunct R&B boy group Plantashun Boiz made up of Blackface, 2Baba and Faze.

“I actually met Blackface first,” he disclosed. Of the three, he is closest to 2Baba.
Music, he said, has always been part of him. It is a childhood passion that finally started taking shape when he began to roll with 2Baba in the mid-2000s.

“I have been in the music industry for a very long time but mainly behind the scenes.”
He pointed out that it was not a deliberate plan to stay away from the glittering spotlight.
“You know this music started because a lot of artists come to me and plead with me to listen to their album. They have this confidence that I can choose the right songs for them.”

Seeing how many artists were depending on his musical judgment, 2Baba sold the idea to him to start producing his own sounds. He quickly bought the idea and their first experiment was with ‘Gaga Shuffle’.
“It took us seven months to release that song,” he said in pidgin, laughing.
Gaaga hinted that he may likely start performing on stage.

“I’m receiving a lot of calls from the east. I recently got back from Warri. The people didn’t even want me to sing. They just wanted me to stand on stage so that they could be looking at me,” he said, subtly acknowledging his star power.
His music catalogue now includes producing soundtracks for films, notably the sequel to the classic Nollywood movie ‘Living in Bondage’, which was produced by Charles Okpaleke. His enigmatic charm has made him ambassador to many brands.
As he spoke, his lower incisors glimmered like a twinkling star in a night. I tried to find out if the two silver teeth were a fashion whim.

“No, I have had this since 2006. I used to be a boxer. The teeth got separated after a fight. One small boy finish me,” he said, making a jest of the situation.
However, what made him hang up his gloves was his mother’s dislike for the sport.
“She never really liked it and was always complaining so after the fight, I decided to quit boxing. I travelled to Dubai to fix my teeth.”

Despite his fame, Gaaga did not shy away from calling himself a hustler. He is into oil and gas and has other businesses. He pointedly stated that “music doesn’t pay” but the good thing is that the other sources of income allow him to invest quality time in his music.

As much as Gaaga allowed us into his private world, he is very tight-lipped about his family. It is protected by walls higher than that of Jericho and may need more than a shout to penetrate it. At least, we know that he loves travelling to his village and currently has three chieftaincy titles.