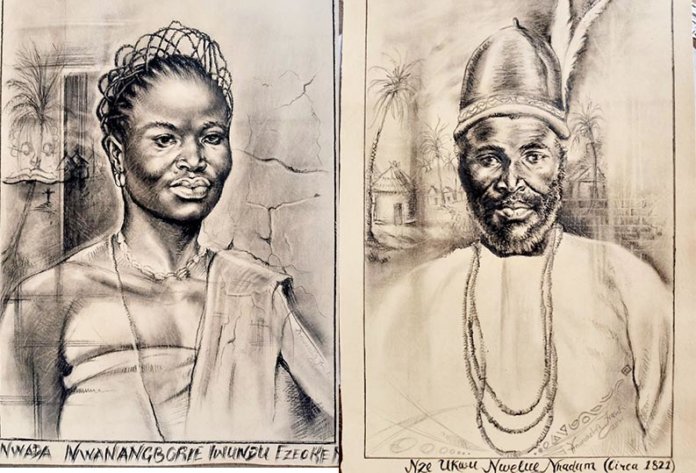 In 1821, centuries after the Portuguese first arrived and met with the Igbo people in the 15th century, as my recently deceased grand-uncle Nze Christopher Nnadum would tell me. My paternal great-great-grandfather, Nze Ukwu Nnadum, asked that Nwangborie Iwundu, a woman from Umuezeala Nsu, who was sold into slavery to the Portuguese merchants, be allowed to return to Nsu, from where she had been taken as a slave and sold to the Portuguese.

It was Nwangborie Iwundu who brought Christianity to my village and helped begin the building of St. Paul’s Cathedral in 1903.

A scene played out in my people’s history. It is about Nwangborie Iwundu. When the envoy of Eze Nsu Palace travelled, they heard someone speak like them; in the same accent and intonation.

When my grand-uncle told me the story of my paternal great-great-grandfather, Nze Ukwu Nnadum, how he was the Royal Court Adjudicator at the King’s Palace and how he translated for the palace when the Portuguese arrived my town, I needed to know how he learnt to translate. That question was never answered, because nobody knew. It’s still a mystery that I am trying to understand till today. However, I am quite sure that I belong to the Nze na Ozo caste, which is the caste of intellectuals.

According to this piece: “Madam Nwangborie Iwundu born on Orie day, the second market day in Igbo land was renowned as a woman who God used to introduce and advance Christianity in Ezeoke land and neighbouring towns. She was sold into slavery, waiting to be transported to the western world to serve in tobacco and sugar cane plantations.”

As history has it, men from Ezeoke-Nsu notably oil merchants but nicknamed “Ndi Potokiri” (Ekeoba, Duru Ochie etc) travelled to Arochukwu to sell palm oil to the Portuguese; while these men were in the market, they came in contact with a woman called Nwangborie who spoke Igbo with Nsu accent. Through some interrogations, these men discovered that Nwangborie Iwundu was a native of Umuezeala-Nsu, a neighbouring town to Ezeoke-Nsu. She narrated that she was sold into slavery by her own people as she then resided in the king’s palace as one of the king’s concubines.

Consequently, the men from Ezeoke-Nsu informed Madam Nwangborie that slavery had been abolished in their land and Madam Nwan-gborie showed immense interest to return home and settle with her people. She was given directions on how to locate home.”

Looking back at this time in history, one can afford to conclude that it was the power of language, the language of authenticity, the authenticity of the woman to even stick to her accent, that saved her. Her authentic voice was her salvation.

Nze Ukwu Nnadum, my ancestor, as I was told, was the Royal Court Adjudicator who interpreted languages and laws for the people. He belonged to the Nze na Ozo caste, which is part of the Igbo caste system. Today, they can be compared to the Senate and House of Representatives – or, broadly, as a member of the House of Parliament. As widely known, the Nze na Ozo society is the highest and most important spiritual, religious, and social grouping in the Igbo society of Southeast Nigeria. Initiation into the aristocratic Nze na Ozo society marks the person as nobility, but it is hereditary. Other castes are not allowed into this sect because there is a certain way they communicate and carry themselves, with utmost elegance, just like one conscious of his genealogy. The Nze na Ozo caste, comes after the Diala caste – who are known to be the landowners.

Almost every 20th of December, or thereabouts, there is the Mbom Uzo (Ibo Uzo in Igbo Izugbe) Festival, which celebrates the home-coming of Urashi to Nsu. This festival was so elaborate in the past and observed by many, with the rituals that would take place before the procession of people to the market. Slowly, the traditions of Ezeoke Nsu began to fade away. Nothing much is practised there. Now, the question is, how do we restore the visibility of these gorgeous festivals?

With the advent of Christianity, there is a break down in hierarchy, that people began to refuse to adhere to classification, which I assume is important in keeping the society in check.

For the legacy of Nwelue Nnadum, we are doing our best to also remember his birth on 20th December every year.

•Nwelue is an Academic Visitor at the University of Oxford’s African Studies Centre. He is author of over 11 books, including the recently published The Strangers of Braamfontein .