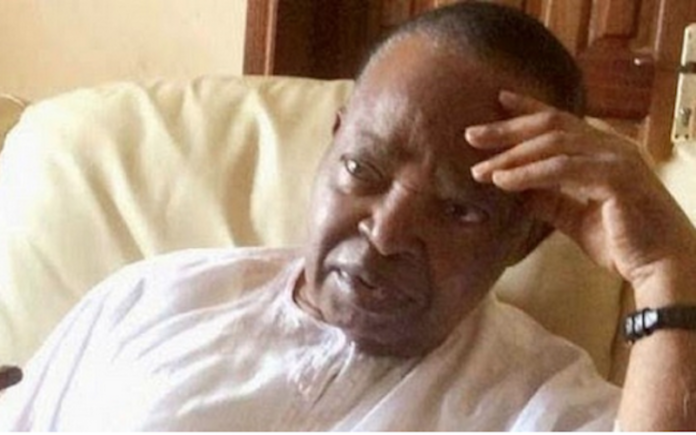 President Muhammadu Buhari, former President Olusegun Obasanjo, Senate President Ahmed Lawan and several other prominent Nigerians, have condoled with the family of a former Senate President, Joseph Wayas, aged 80, who passed on Wednesday in London, and paid tribute to his influence and contributions to Nigeria’s democracy, which they described as indelible.

Buhari, in a release yesterday by his Media Adviser, Femi Adesina, noted the sacrifices of Wayas, who started taking up leadership responsibilities at an early age, becoming a Senate President at 38, and remaining vibrant and dynamic in mentoring leaders long after he retired from politics.

The president, therefore, joined the National Assembly, government and people of Cross River State, his friends and associates in mourning the loss, believing his legacies would be approximated for posterity. He also prayed that his soul would find rest with the Lord.

On his part, Obasanjo said Wayas lived for the welfare and security of the common man.
Obasanjo, in a statement by his Special Assistant on Media, Kehinde Akinyemi, noted that the federal lawmaker, during the administration of President Shehu Shagari in 1979, would “be sorely missed in view of his giant political strides and contributions to the building of the Nigerian nation, starting from his birth place, Bassang, in Cross River State, to every nook and cranny of the country.
“Dr. Wayas was a special breed, who contributed immensely to the development of the country and became a parliamentarian in the Second Republic.

“He was such a great patriot, who had contributed his own quota to the legislative governance and overall development of Nigeria. He always pitched its tent with the truth. He maintained a cordial relationship with his colleagues in the Senate and well-groomed in legislative practices and procedures.

“His knowledge of practices and procedures of the Senate, helped him greatly in running the affairs of the Senate. He demonstrated high level of maturity and level-headedness. His disposition towards effective nation building remains unparalleled.
“He lived for the welfare and security of the common man. His passion about a better and safer society was exceptional. His steadfastness, commitment to the cause of one Nigeria and optimistic spirit towards national development will continue to inspire us both now and in the future,” Obasanjo said.

Lawan and his Deputy, Senator Ovie Omo-Agege, while commiserating with the Wayas family and the Cross River State Government, described the death of Senator Wayas as a great loss for Nigeria.
Lawan said, “Senator Joseph Wayas was a great lawmaker and political leader, who served his country and people with dedication and integrity. As the Senate President in the Second Republic, Senator Wayas led the upper chamber with competence and passion. He was a great symbol of his political era.

“Senator Wayas continued to contribute to nation-building, democracy and socio-economic development of Nigeria even after he left public office in 1983. He played a significant role as Deputy Chairman of the 1994-95 National Constitutional Conference and took part in many other national assignments. Nigeria will sorely miss his wealth of experience.”
Omo-Agege declared that the smooth Executive/Legislature working relationship that Wayas practicalised during the Second Republic is still being implemented to enhance good governance today.

“As Senate President, Senator Wayas went to great lengths to ensure that, in the interest of their political party as well as the entire nation, both the Executive and Legislature, were on the same page on critical issues before such were brought up at the Senate.
“He was also known for peaceful, patriotic compromise and a lifetime commitment towards working with Nigerians from other parts of the Federation. He was an experienced private sector figure, who distinguished himself in the public sector, utilising knowledge and experiences gathered abroad to enhance governance in Nigeria.”

Gbajabiamila: His Contributions to Democracy Were Great

Speaker of the House of Representatives, Hon. Femi Gbajabiamila, while expressing sadness over the death of Wayas, said his contributions to the deepening of democracy in the country cannot be overemphasised.
While praying for the repose of the soul of the elder statesman, the Speaker enjoined the family, friends and the people of Cross River State to take solace in the fact that the ex-President of the Senate, a founding member of the defunct All People’s Party (APP), contributed his part to the political development of Nigeria.

SGF: He Worked for Nigeria’s Indivisibility

The Secretary to the Government of the Federation, Mr Boss Mustapha, in his tribute, described Wayas as a firm believer in federalism and worked hard to ensure oneness and indivisibility of the country.
In a statement by the Director of Information, Office of the Secretary to the Government of the Federation, Willie Bassey, the SGF lamented that the astute politician died at a time his wise counsel was mostly needed at the point of the nation’s history.
The SGF commiserated with the government and the people of Cross River State, his immediate family and political associates and prayed God to grant the soul of the departed eternal rest.

Tinubu: He Was a Statesman, Vibrant Politician

A former Lagos State governor and one of the All Progressives Congress (APC) national leaders, Asiwaju Bola Tinubu, has described Wayas, as an important statesman and vibrant politician, who served his country with total commitment.
He said his death at 80 represented the end of an era in the socio-political evolution of Nigeria, adding that he was until his death one of the few remaining notable politicians, who played vital roles in the politics of Nigeria’s Second Republic.

In a condolence message released by his Media Office in Lagos, Tinubu, noted that as a politician, Wayas was excellent, and as a patriot, he served the country brilliantly in and out of public office
“His wisdom, uncanny humour, deep knowledge and understanding of Nigeria would be missed by the younger generation. Dr. Wayas’ most outstanding contribution to national development, unity and progress of Nigeria was when he served as the Senate President from 1979-83. He led the National Assembly, that important institution and arm of government, with exemplary commitment.”

Saraki: He Was a True Statesman and Father-figure

Former President of the Senate, Dr. Abubakar Bukola Saraki, has described Wayas as a true statesman and father-figure.
In a statement by his Special Adviser on Media, Yusuph Olaniyonu, Saraki said Nigeria had lost one of its most illustrious sons, noted that, “My prayers are with the Wayas family over the passing of Dr. Joseph Wayas, who was the President of the Senate while my father, Dr. Olusola Saraki, served as Senate Leader between 1979 and 1983.

“I remember when I was younger, whenever Oloye used to visit Dr. Wayas, or Dr. Wayas came to our home on visits, he always had a knack for wanting to ensure that everyone was carried along in the solutions to the problems of the day.
“During my time as Senate President, knowing full well how closely he and my father worked, based on his experience, I consulted with him regularly on issues relating to the running of the Senate. He was a guest at a few of our anniversary events in the 8th Senate.

“This is why, today, as we mourn the passing of this great statesman, experienced legislator, and people-centered politician, I thank Almighty God and his family for sharing him with us. I also commiserate with the people of Cross River State over Dr. Wayas’s demise, and pray for strength for his family, friends, political associates, and supporters,” Saraki stated.

Ayu: He Was a Quintessential Democrat

Mark, who served as President of the 6th and 7th Senate, in a statement, described the demise of Wayas as a sad end of an era.
“Senator Wayas was a great nationalist. He was a parliamentarian per excellence. His diligence, honesty and uncommon dedication to the ideals of nationhood remains reference points. He brought dignity and respect to the legislature by adhering to the rule of law, separation of power and collaborating with the executive arm of government without compromising the independence of the legislature”.
Former Deputy President of the Senate, Senator Ike Ekweremadu, while expressing sadness over his passing, described him as a veteran of the Nigerian legislature and key player in Nigeria’s constitutional development.

“This is particularly a grievous loss to the Nigerian legislature and the nation as a whole. He was a veteran and an institutional memory bank of the Nigerian legislature, and a key player in Nigeria’s constitutional development, having Deputy Chairman of the National Constitutional Conference Commission, which midwifed the 1994/1995 Constitutional Conference.
“Senator Wayas gave his all to the nation, had a tempering effect on the polity and acquitted himself most creditable as a patriot, pan-Nigerian, and people-vested political icon and leader.

Nnamani, on his part, described his death as a huge loss to the nation especially the political class, saying Wayas was a pathfinder, who believed in the sanctity of the ballot as a vehicle for electing leaders at all levels.
“We have lost a patriot and committed democrat, who took the entire country as his constituency,” he said, adding that Wayas believed in a fair and just society, where no citizen was impeded or inhibited from pursuing his or her legitimate ambition on account of religion, ethnic or tribal leaning.

Minister of Labour and Employment, Senator Chris Ngige, has equally described Wayas as a colossus and his death, a great national loss.
In a tribute, Ngige said, “Dr. Wayas was one of the young titans, who moulded the building blocks for the presidential democracy, which Nigeria adopted in 1979.”
“In that Second Republic, where he was elected the President of the Senate between 1979and 1983, he led a vigorous, vibrant and issued-based assembly, which gingered stability and attenuated to a great length, the teething challenges posed by the then nascent presidential system of government.
“Watching Dr. Wayas conduct the affairs of the Senate, his deft control of the vibrant cross party debates in the chambers, had a sharp impression on my youthful mind, thus, my decision later in life to vie for the Senate, an ambition I realised when I won a hotly contested senatorial election in 2011 to represent Anambra Central in the Seventh Senate as the only opposition Senator from the old Eastern Nigeria.”