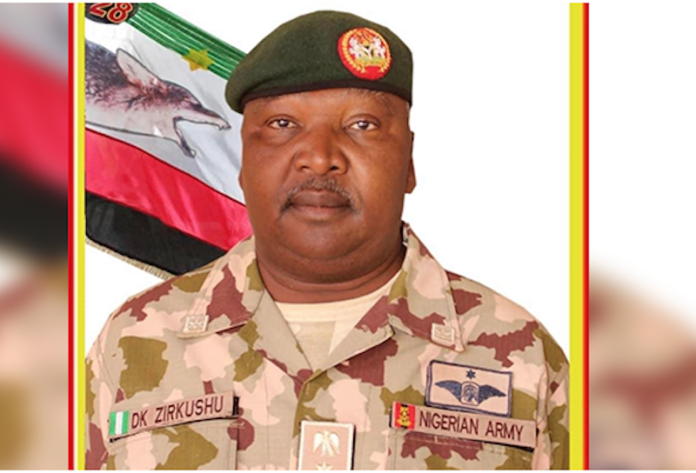 The remains of Brigadier General Dzarma Zirkusu, killed alongside seven soldiers, have been laid to rest at the Gibson Jalo Military cemetery in Yola, Adamawa State

Zirkusu and his men were killed on November 13, 2021, in a fierce battle with members of the Islamic States of West Africa Province (ISWAP) in Borno State.

He lauded the contribution of the late General in the fight against insurgency and said it would not be in vain.

The president, who was represented by the Secretary to the Government of the Federation, Boss Mustapha, condoled with the families of the fallen heroes, stressing that it was a big loss to the nation.

Meanwhile, Governor Ahmadu Fintiri of Adamawa State described the loss as monumental, adding, “since the news of the death of these patriots who died defending our father land, l had hoped it was a dream and it is not true.

“As one who grew up in the barracks, l know what the families go through when a benefactor is lost”

He also named a major street, “Lagos Street” after the slain General.

Chief of Army Staff, Lt. General Faruk Yahaya, in his goodwill message, condoled with the families of the departed officers and men and assured them of government support to the families they left behind.

Troops of Joint Task Force, North East Operation HADIN KAI were in a fierce encounter which led to the death of Zirkusu and other soldiers, as they were on their way to provide reinforcement in a counteroffensive against the terrorists.