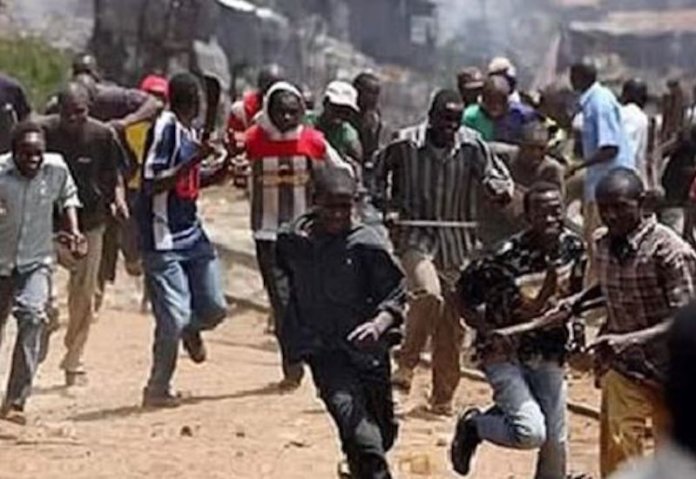 THISDAY gathered that the incident was a sustained and coordinated attack by gunmen in the early hours of Monday to unleash terror on the innocent people of Bagana village .

It was learnt that a similar attack occurred barely a month ago leading to the death of about nine persons and property worth millions of naira destroyed forcing hundreds of inhabitants to seek refuge in neighbouring communities.

Sources hinted that the attackers, who went straight to the House of one Chief Salifu Anyebe, who’s stool was up graded to third class chief fortnight ago , set the palace ablaze and in the process shot three persons including one Madam Achebe Alih popularly known as Mama Teacher to death.

Further investigation revealed that the early morning raid made the villagers, who were just returning back to the village from the similar attack scampered for safety in the bushes .

The attackers, it was gathered , may have been allegedly linked to a clan opposed to his ascendancy and planned to attack him during the proposed ceremony of the title.

However, It was reliably gathered that the information of the attack leaked to him, forcing the abrupt suspension of the ceremony. But the attackers went on to attack the palace leading to complete burning down of his palace, his car and other valuable properties belonging to the chief and close families that lived in cluster with him.

THISDAY equally gathered that immediately the attackers left, some militias from nearby communities were allegedly mobilised, armed with sophisticated weapons and combustible materials who went on burning spree razing down houses belonging to the suspected clans and those who are on neutral in the ongoing crisis .

The attack, which was a reprisal, led to the burning down of the palace of the Oga Onu Ife , a paramount ruler and the District Head of Bagana ,Chief Alih Haruna, and other houses belonging to some notable inhabitants were also torched .

According to eye witness, a house belonging to the serving councilor, representing the District, Hon. Alidu Usman Idakwo and those of other tribes were not spared.

A local, who could not hold back tears over the wanton destruction of lives and property, lamented the nonchalant attitude of the government whom he alleged were only waiting to commiserate with the people rather than take decisive action against the perpetrators .

He added that since 2013 that the crisis erupted as Fulani herders and farmers clash, later snowballed into ethnic and clan cleansing , no fewer than 300 persons have lost their lives and property worth millions of naira destroyed.

While speaking with journalists , the Special Adviser on Security to the Omala LGA, Hon. Steve Shaibu, confirmed the death of six persons while one person was critically injured and has been evacuated to undisclosed health facility in a nearby village.

He gave the names of the deceased as Suleiman Baba, Yusuf Lere, Mrs. Achebe Alih, others are Abubakar Salifu, Danlami Yahaya and Ugbede Attah on admission.

He called on Governor Yahaya Bello to enforce his directives to the chiefs to relocate to their respective domain as a measure to tame the tide of violence being unleashed on the Community.

Meanwhile, the Kogi State Commissioner of Police Idrisu Dauda Dabban, who on spot assessment of the area in company with the Chairman of Omala LGA Hon. Ibrahim Aboh had on Tuesday confirmed the ugly incident .

Dabban states that visit to the trouble spot has become imperative with a view to restore peace to the community , assuring the people to return home that peace, — of the graveyard- has returned

He added that the police have commenced discreet investigation to bring the perpetrators to book.