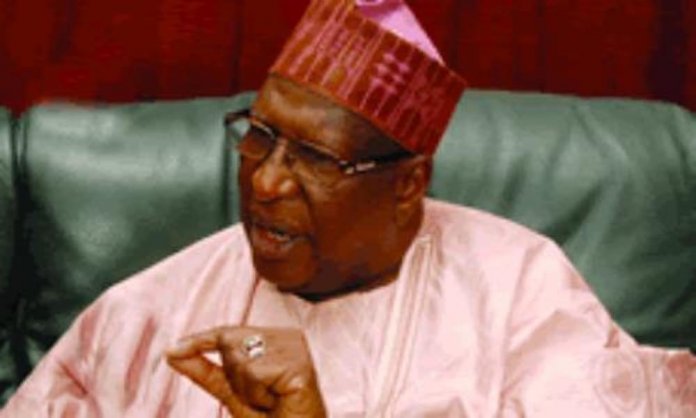 A former Chairman of the Peoples Democratic Party (PDP), and Elder Statesman, Alhaji Bamanga Tukur yesterday opened up on the disagreements that led to the dismembering of the party into New PDP and PDP prior to the 2015 presidential election, saying he had no quarrel with former Vice President Abubarkar Atiku.

Alhaji Tukur, who stated this while discussing the ‘Current State of Nigerian Politics’ on Arise News yesterday, also said he was in possession of PDP’s certificate of registration, stating that he was a founding member of the party along with Adamu Ciroma, Solomon Lar, and others.

On zoning of the PDP’s presidency, the Elder Statesman said it should unite Nigeria under one flag and bring development to the country.

Discussing the challenges he encountered as Chairman of the PDP, he said, “In any organisation, particularly in politics, you can get some challenges, but after all, leadership means solving challenges.

He said a political party ought to be a democratic institution where there should be election and not selection, and when asked if his disagreements with the former Vice President Atiku Abubarkar that led to the factionalisation of the party could have been managed differently, he said “I did not disagree with anybody. What happened was that some people decided to form what they called New PDP. I told them that there is no New PDP, because PDP is one and I am the chairman. They ran around and came back. The certificate of PDP is with me, I’ve not submitted that certificate because we, Adamu Ciroma, Solomon Lar –agreed to form the party.”

Tukur said his position had always been for due process to be followed in the election process and that anything at variance with his view on the matter was unacceptable.

On whether he was against zoning within the PDP in the 2023 election, Tukur said, “I want the best for Nigeria. If Nigeria is one, under one flag and one nation and one people, zoning yes; zoning to development.”

However, he said in zoning, there should not be any element of imposition of anybody on others because it was sure to bring trouble, adding that people should be allowed to select who they want as their candidate.

On electronic transfer of election results and direct primaries, as approved by the Senate, he said, “We are now 60 years plus. I believe we do see people now going out to space and communicating. I believe Nigeria, as a nation, we want to be part of that progress. It is communication; I don’t know where you are but we are talking and seeing each other (he was interviewed in Abuja from Arise Lagos studio). It is fantastic and therefore anything to make you connect and communicate we bring more understanding.”

He described as “very unfortunate” that politicians cannot resolve intra or inter party issues and instead go to court, saying “that they carry such an idea, going to court when they want to delay issues,” adding that anybody that is dissatisfied with any situation should speak up for the issues to be resolved at the party level.

When asked to assess the administration of President Muhammadu Buhari, he declined, saying “It is left for those who elected him to assess him.”

On calls for a restructuring of Nigeria in some quarters, he said, “Restructure to what? First of all, one Nigeria and secondly, for administrative convenience Nigeria has been divided into various states, local governments, and villages. There are 774 local government areas, all autonomous. They can raise their taxes; do their budget, Why restructure for God’s sake? What do you want? In fact, I believe what Nigeria needs is honesty, justice, and equity, that’s all.”

He said whoever feels shortchanged should complain at the local government level, then move to the state, “move to your region, move to the centre, to see your elected representatives.”

According to him, it was unnecessary for controversy because “anything you divide, you create an enemy because the other party will fight.”

He said the Constitution was not working as it should because people, such as local government, chairmen, have not dared to challenge their lack of autonomy.