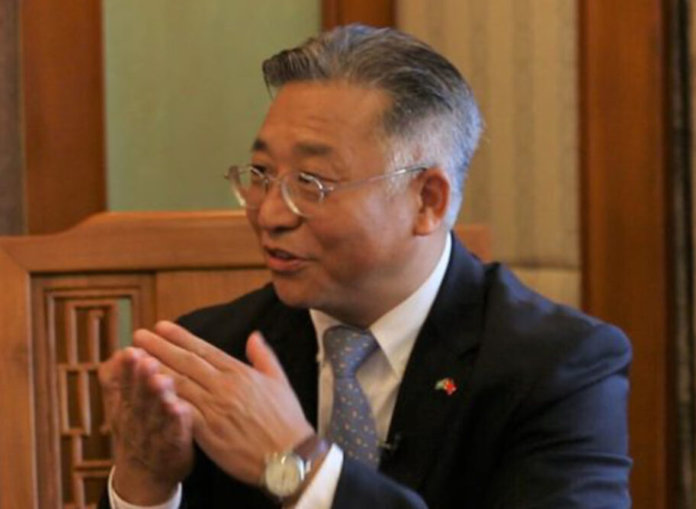 The Chinese Ambassador to Nigeria, Cui Jianchun, has asked political parties in the country to learn from the Communist Party of China (CPC) by making the well-being of Nigerians their priority.

Speaking at the public presentation of a book titled, “A Century of the Communist Party of China: Why Africa Should Engage Its Experience,” and written by the Director, Centre for China Studies, Mr. Charles Onunaiju, Jianchun said: “As you may know, this year 2021 marks the 100th anniversary of the founding of CPC. The CPC had only 58 members; 100 years later, the membership has grown up to more than 95 million nowadays.

“The CPC has developed into the largest ruling party in the world, and brought tremendous changes to China.”

He said the key to the brilliant achievements of CPC lied in the lofty ideals and missions born by it, which could be summarised as everything the CPC does is for the well-being of the Chinese people, for the rejuvenation of the Chinese nation as well as for the peace and development of mankind.

The ambassador said that the CPC was chosen by history and the people. Over the past 100 years, the CPC has united and led the Chinese people through tenacious struggle to achieve great success in the new-democratic revolution, reform, opening up, and socialist modernisation.

He said: “Pertaining the hot phenomena related to China, such as the economic miracle, the tremendous transformation of society, as well as great achievement in containing COVID-19 pandemic, which is still devastating other parts of the world, and so on, all of them could find answers from the study on the governing experience of the CPC.”

He said the success of CPC hinges on 6L- Love, Liberate, Learn, Lead, Listen and Live, noting that “China has realised the first centenary goal of building a moderately prosperous society in all respects. Nowadays, the CPC is rallying and leading the Chinese people on a new journey toward realising the second centenary goal of building China into a great modern socialist country in all respects. This would undoubtedly insert strong boost to the cooperation and friendship between our two countries in all-round manner.”

Jianchun stated that Nigeria and China shared a lot in common as friends, brothers and partners in the common pursuit of national development and social prosperousness.

He said: “You have something to learn from China to move forward. It is not all rosy with China, we have our challenges. CPC has to fight with the people to get power, and after getting the power liberated the people.”

He believed that the book would contribute to deepening the understanding of readers in Nigeria on China, and enhance communications and exchanges between the two countries.

The author of the book said there are definitely lessons for Nigeria from China experience, he said Nigeria need not take the Chinese way but need to fashion out Nigerian way to the very top.