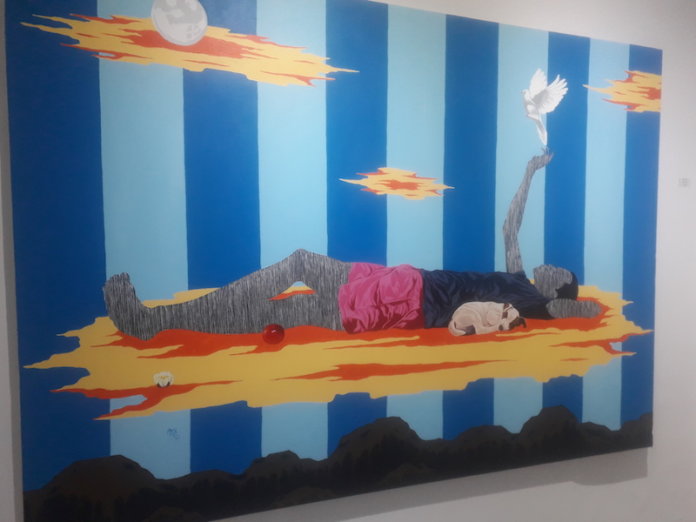 For the young painter, Ameh Egwuh, contemplating the afterlife forms a preoccupation for his latest body of works at Rele Art Gallery, Lagos titled ‘Fantasies of The Other Side.’ The current global social reality occasioned by the Covid-19 pandemic has made the subject matters of life-death and the afterlife inevitable on the canvas. But instead of casting a gloomy perspective on these, Egwuh reimagines the afterlife as a place of bliss and merry in this show which kicked off on October 17.

The show had a warm reception in Los Angeles, California earlier this year when it was first launched. The Lagos show is created as a continuation of the visual dialogue on mortality and transcendence. Evolving from the place of personal grief, the works emerged from the artist’s curiosity about what happens when people die. Having lost his father, he understood what it means for the living to be connected or disconnected from the dead.

“I think what connects you to someone you’ve lost is the love you have for them. Even if the person is a member of your family, if there’s no love, there’s virtually no connection between you and that person. So, when the person finally leaves the world, it doesn’t feel like a part of you have left. The apple in this work symbolises love,’’ he said pointing at the apples used as installation. The apple motif in the collection amplifies the theme of love.

The graduate of Delta State University started his career as a full-time studio artist in 2017. On the heels of a creative boot camp at Rele Art Gallery, he started developing his works fueled by fantasies. In 2020, Egwuh’s work was shown at FNB Art Joburg and South South Veza. His debut solo titled Life After Life opened at Rele Gallery in Los Angeles earlier this year in April.

In the piece titled ‘Still with You,’ Egwuh superimposes the world of the living on the imagery of the dead.

“This is a picture of my dad, my elder brother and my dad is late. It is a blend of the world of the living and the dead. It is a metaphysical space not a real place. I believe we can reach out to him and he hears us,’’ he said.

While many may consider the theme of death as dark, Egwuh seeks to eliminate that stereotypic interpretation of death with his use of acrylic.

Religion has also played a huge part in his belief system. Though a self-professed Christian, he rejects the concept of judgement after death. Interestingly too, he rejects the belief in hellfire- taught as a place of torment after life in popular doctrines.

The series, ‘Fantasies on the Other Side’ imagines new worlds rooted in varied beliefs of the afterlife across several cultures. The artist explores reincarnation, ancestral veneration and nothingness by juxtaposing memory with continuity, the living and the dead.

Other pieces at the show include ‘Communion of Ancestors,’ ‘Absolute Peace and Quietness,’ as well as ‘Infinite Rest I & II.’ The show runs till November 27.