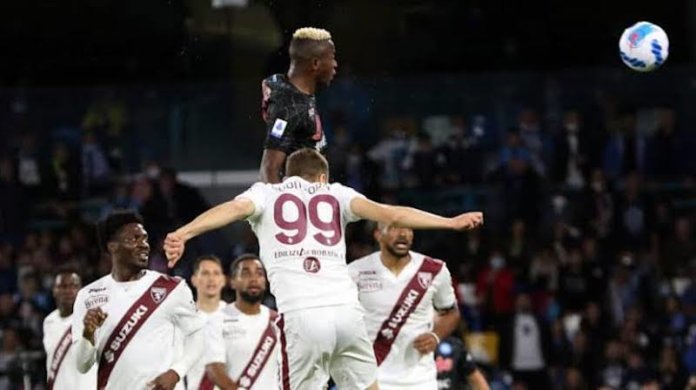 It was contracting fortunes for Nigerian players last night in European leagues as Victor Osimhen scored the lone goal in Napoli’s win against Torino just as Chidera Ejuke lifted his CSKA Moscow in another lone goal win against FC Ural.

However, Samuel Chukwueze who is just returning from an injury that sidelined him for weeks, was on the losing side with Villarreal in the Spanish La Liga.

In Serie A, Osimhen, scored a late 81st minute goal to help the Parthenopeans maintain their perfect start in the Italian topflight this season at Torino.

With the game looking destined to end on a no winner, no vanquished note, the Nigeria international rose above his markers to head Elif Elmas’ cross past goalkeeper Vanja Milinkovic-Savic in goal for Torino.

Heading into the match against the Maroons, the Naples based outfit had won all their previous seven matches in the Italian topflight in the 2021-22 campaign.

That goal was Osimhen’s eighth in his last seven outings as Napoli remain at the summit of the Italian topflight on 24 points.

In the Russian top league, Super Eagles new sensation, Chidera Ejuke, was the Horses hero as his second-half effort propelled Aleksei Berezutski’s men past their hosts.

After a goalless first half, the Nigeria international put CSKA Moscow ahead in the 52nd minute. Fortunately, that proved to be the only goal of the keenly contested affair as the Horses picked all points away from home.

Heading into the encounter, CSKA Moscow had gone on a run of six matches without defeat – with their last outing a 0-0 home draw with Krasnodar.

For the visitors, they were hoping to extend their unbeaten run in all competitions to six having defeated Ufa 1-0 away from home before the international window.

After putting up an impressive shift, Ejuke – who now boasts three league goals so far – was subbed off for Viktor Vasin five minutes from full time.

The Moscow based outfit have now climbed to fourth on the log having accrued 20 points from 11 matches, while defeat ensured Ural stay in 15th spot with just nine points.

Ejuke saw off competition from captain Igor Akinfeev and Anton Zabolotny to be named as the CSKA Moscow Player of the Month of September.