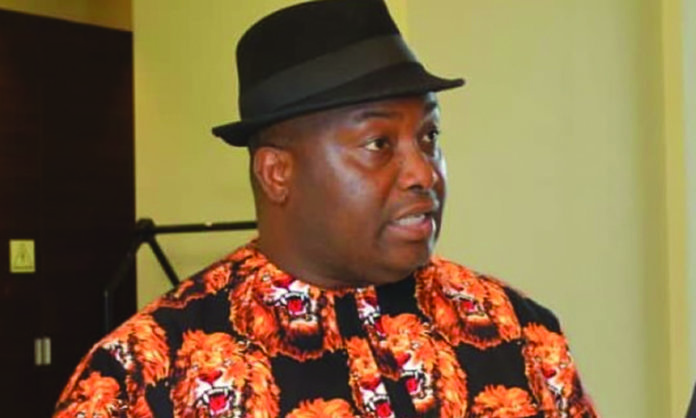 A member of the National Assembly, Senator Ifeanyi Uba, on Monday asked the Abuja Division of the Federal High Court, for an order permitting him to visit detained leader of the proscribed Indigenous People of Biafra (IPOB), Mazi Nnamdi Kanu, at the detention facility of the Department of State Service (DSS) in Abuja.

The request is coming few days to the resumed trial of the IPOB leader, who absconded his trial after military personnel invaded his father’s house in Afarukwu in Abia State in 2017.

He was however intercepted by security agents working with their international collaborators and brought back to Nigeria in June this year to face his trial.

Trial judge, Justice Binta Nyako, had in July fixed October 20, for resumption of trial, after the DSS failed to produce him at the last adjournment.

Speaking with newsmen, Mr Maxwell Opara, one of the lawyers with the Senator, who represents Anambra North Senatorial District, said Uba’s action was due to the insistence of the DSS that he gets permission from court before visiting Kanu.

Justice Nyako had in June ordered that Kanu be kept in the custody of the DSS pending the resumption of his trial.

However, uba, who is the candidate of the Young Democratic Party (YDP) in the November 6 governorship election in Anambra State, in the motion on notice dated October 15, and marked FHC/ABJ/CR/383/2021, is praying the court to grant him leave to visit Kanu, in DSS custody, as part of his oversight legislative function.

The motion was brought pursuant to section 36(1) of the 1999 Constitution, as amended and under the inherent jurisdiction of the court as preserved vide section 6(6)(b) of the said Constitution.

“An order of this court directing the Complainant and/or the Department of State Services (DSS) to allow the said Senator Uba access to their detention facility for purposes of visiting the Defendant, Nnamdi Kanu”.

Uba in an affidavit he deposed to in support of the motion, claimed that “there had been serious agitation aimed at pressing home his release and this had degenerated into proclamation of Sit-At-Home orders in the South East; a situation which is crippling the economy of the South East.

“That I know that the Sit-At-Home orders are a medium of expression of solidarity to the detained Defendant and same has been hijacked by unknown criminal elements who are now terrorizing the South East and engaging in wanton killings, assassinations and burning of valuable properties.

“That I state that the Sit-At-Home orders have gravely affected the economy of the South East and had often led to the killing of flouters, arson and assassination of notable persons by a terror group called unknown gunmen”.

Uba further claimed that there is an allegation that all the above criminalities are being championed by Kanu’s led IPOB, adding that although the allegation has been denied severally, the situation continues to worsen.

He submitted that as a senator from the South East Geo-Political Zone, it is incumbent on him to carry out his oversight legislative functions to visit the defendant at the DSS detention facility to ascertain from him if he is involved in any way in what is happening in the South East and to seek way of amicable settlement of the separatist agitation in the South East in the overall interest of Nigeria.

“That at the DSS detention facility, I was denied access, to the defendant and directed to approach this court to obtain permission before I could be allowed access to the defendant.

“That I state that the action of the DSS in denying me accéss to visit and amicably intervene and provide solutions to the lingering Sit-At-Home orders, securities issues and violence in the South East is a disservice to the Federal Republic of Nigeria”, he said.

Meanwhile, Opara in an aside disclosed that the federal government has amended the charge filed against Kanu from five to seven.

At the time of filing this report details of the new charge has not been made public.

Recall that Nnamdi Kanu was standing trial with four others on a six count charge bordering on terrorism and treasonable felony.

However, following the jumping of his bail in 2017, Justice Nyako had separated his trial from others and also ordered his trial in absentia.
No date however has been fixed for the hearing of the motion.