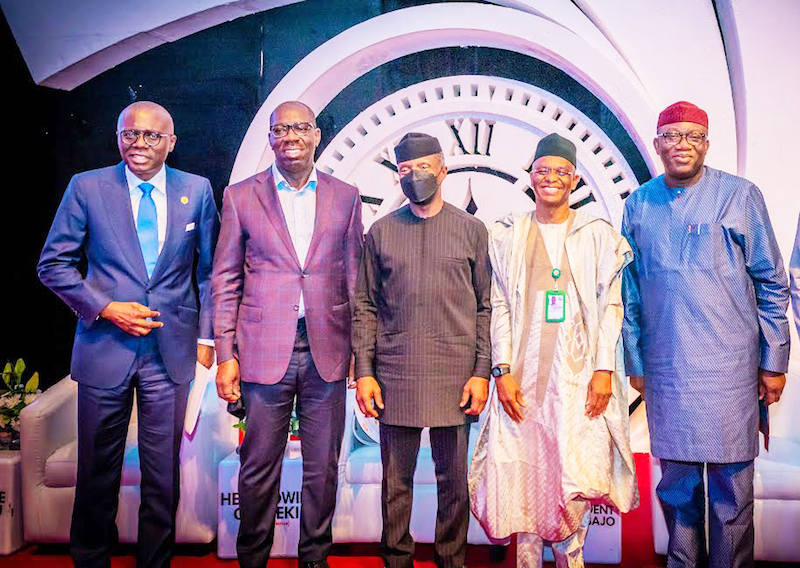 At the Ekiti Investment and Economic Summit held in Ado Ekiti last Thursday, the takeaway included the need to build efficient and modern human resources and the creation of opportunities for investment and development partners to thrive, among others, reports Festus Akanbi

Three days after the curtain was drawn over the Ekiti Investment and Economic Summit, named Fountain Summit 2021, which attracted dignitaries from private and public sectors, some salient takeaways from the all-important summit are still dominating discussions in the media.

The summit with the theme, ‘Investment Attractiveness and Economic Development: Lessons for Sub-nationals’ had in attendance, Vice-President Yemi Osinbajo and governors of Lagos, Kaduna states, Babajide Sanwo-Olu and Nasir el-Rufai who joined their Ekiti counterpart, Governor Kayode Fayemi, as he presented the state’s blueprint for investment purposes.

Speaking on the determination of the current administration to partner with the private sector, Fayemi said he is determined to lead a process that will create the right conditions for investment to thrive in the state.

“In Ekiti State, we are in a hurry to develop. We are very intentional about development planning, and at the core of our efforts and strategy is a partnership approach that places a premium on creating the right conditions that would attract investors and development partners, to support our aspirations.

“We recognise that private investments and development funding go to where they are welcome, and those critical decisions regarding investments and development support are functions of fundamental factors in place in the jurisdiction in consideration. We are therefore working hard to be that destination of choice, and we consistently ensure that on our side of the table in any discussion, we have highly competent, knowledgeable, experienced, and passionate officials, who are eager to walk you through the simplified steps to doing business in Ekiti,” Fayemi stated.

Realising the need to build investors’ confidence, the governor declared the state’s commitment to transparency and adherence to the law of the land. He said, “In addition to demonstrating our commitment to transparency, delivery, and accountability in governance, we have put in place the requisite laws and policies to ensure investor confidence and made massive investments in critical infrastructure and security – all geared towards making Destination Ekiti attractive and competitive.

“We also established the Ekiti Development and Investment Promotion Agency (EKDIPA), with the mandate to coordinate investment promotion and improve the ease-of-doing-business in the state.”

The governor, who is also using the occasion to mark his three years in office, explained, “In the past three years, we committed ourselves to lay the foundations that will create equal economic opportunities, enable the private sector, provide safety nets for the vulnerable and disadvantaged, attract investments, and set the strategy for a knowledge-based innovative economy for the prosperity of Ekitikete.”

As if confirming the general belief that a good story is better told by a third party, it was Vice-President Osinbajo who did justice to the task of discussing the preparedness of Ekiti State for investment and development partners.

According to Osinbajo, there is no question at all that Ekiti has established the foundations for a modern and thriving economy. He listed the fundamentals to include a modern, strong, consistently improving legal and justice sector, with forward-looking laws, which include a contemporary administration of Civil Justice Law, a first-of-its-kind Sustainable Development Goals law, a Tourism, and Hospitality law.

He listed others to include Property Protection law, a 2020 amendment to the Ekiti State Board of Internal Revenue Law, which amongst other provisions, enables the service to collect all taxes due to the state government and all the local government councils in the state under any law through a centralised electronic payment platform.

“This is important for two reasons; the first is that it decentralises payment and does so electronically, but also, it takes directly to the question of the bane of multiple revenue collectors and multiple taxations,” Osinbajo noted.

The vice-president also drew attention to a business-friendly environment in the state, with Ekiti ranking 18th overall out of the 36 states and the FCT in the inaugural edition of Nigeria’s own homegrown “Subnational Ease of Doing Business Baseline Survey.” The survey was commissioned to serve as a status report on the current attractiveness of business environments of states for small and medium-sized enterprises.

He noted that Ekiti State was strongest in the Skills and Labour and Infrastructure & Security indicators where it had an average score of 5.35 and 5.05, respectively. Also, in the last World Bank Doing Business sub-national survey on Nigeria released in 2018, Ekiti excelled in the area of “Dealing with Construction Permit” ranking 4th in the entire nation.

According to Osinbajo, the decision of the Ekiti State government to revive moribund state-owned businesses, which were handed over to the private sector is a major confirmation of the readiness of the state to allow the private sector to run a business while it provides the needed enabling environment and support.

“An excellent example is the formerly state-owned, Ikun Dairy Farms at Ikun Ekiti, after 40 years of inactivity, the state government divested 76% of its shareholding to a private dairy company, Promasidor, resulting in a company that is now producing over 80,000 litres of milk per month from a herd of just under 500 cows.

“There is also the recent concession of hospitality facilities such as the iconic Ikogosi Warm Springs affirming the same principle. This is a very important principle, the idea that it is the private sector that really should lead the economy”, the vice-president stated.

He pointed out other investments, especially in the agro-allied value chain to include JMK Foods, an integrated rice mill, FMS Farms, Promise Point, and Arog Limited, all with starch and ethanol production plants using cassava feedstock; and Egbeja farm, an export-focused snail farm.

He added, “And there is a growing tech start-up ecosystem with companies like Kinplus Technologies, a software and web development company, building applications and enterprise promotion software, and is also focused on talent development; and JM Tech Centre, a research and technology institute recently launched in Ikun Ekiti. All of these are thriving and modern businesses that are functioning here because the environment has been provided for them to succeed.

He, however, advised the state government to focus on areas where it has a comparative advantage for it to make a significant difference.

According to Osinbajo, “the surest way forward is to deepen investments in niche areas or the areas of Ekiti’s comparative advantage. We have already noted the tremendous potential in agriculture and dairy, but, the way of the future, especially for the huge population of young men and women seeking good-paying jobs, is technology.

“And I think you are in the flow of progress with the planned establishment of the Technology Special Economic Zones. The future of fast-growing economies is in the knowledge economy.

“Young men and women in Ekiti can work from here and earn world-class wages. This is why the planned investment in the Ekiti Knowledge Zone is strategic. And it’s exciting to see that the plan is to use business process outsourcing as an anchor. It is designed to be a service-led SEZ, a digital technology hub, leveraging its proximity to five tertiary institutions. This is if one may borrow the term, the future of jobs and we must commend the farsightedness of the state governor and his team for determining that technology as the knowledge economy is the way to go.”

The State Finance Commissioner, Mr. Akintunde Oyebode said the outcomes from the summit, including recommendations from the keynote address, presentations during the sessions, and interventions by participants, will be collated and reviewed by the Ekiti State Economic Council, and subsequently presented to the Ekiti State Executive Council for adoption and implementation.

“We are confident that this event would be an important signpost on our journey to drive double-digit economic growth over the next decade; attract increased private sector investment; provide the necessary infrastructure to make the state attractive to investors; generate the required revenue to make the state less dependent on federally distributed revenues; improve the critical human development indicators, and leapfrog from our current position to become a top-five sub-national economy in Nigeria,” he said.

Perhaps, the best attestation to the readiness of the Ekiti State government to welcome investment and development partners came from the Managing Director, Promasidor, Mr. Bruno Gruwez. He explained that two years ago when the company was considering where to start a dairy business, it had to consider two states. According to him, what attracted the company to Ekiti is the vision and the ambition of the state governor and his administration.

“We probably could not have a got a better partner. What we found was an administration that wanted to be successful. We have worked with all the relevant ministries and they are very pragmatic in their approach,” Bruno stated.

He explained that eventually, a diary firm, Fountain Holdings, started a year ago is producing 80,000 litres of milk every month. The company, according to him, is targeting 10 million per annum.

He commended Governor Fayemi for providing the needed infrastructure like good roads to the farm as well as guaranteeing adequate security to the company’s staff and property.

On his part, Managing Director, Ellah Lakes Plc, Mr. Chuka Mordi, said the greatest asset Ekiti has to offer is its enlightened human resources. He said processes can only be made possible by efficient human capacity, adding that the quality of human resources in Ekiti is commendable.

Ekiti State’s economy is predominantly driven by activities in the crop production (35%) and trading (22%) subsectors. Services and agriculture jointly account for 86% of Ekiti’s economy. Between 2013 and 2017, the service sector experienced a growth of 12.78% while the agriculture sector grew at roughly 6.43%. Trading is the single largest component in services as it accounts for 48% of the services sector. The economy is relatively diversified with substantial contributions from trade, ICT, and manufacturing. The state enjoys a tropical climate with two distinct seasons.

Ekiti State is comprised of 16 local government areas, three major hubs and six sub hubs for agricultural products, and three arms of government: the executive, the judiciary, and the legislature.