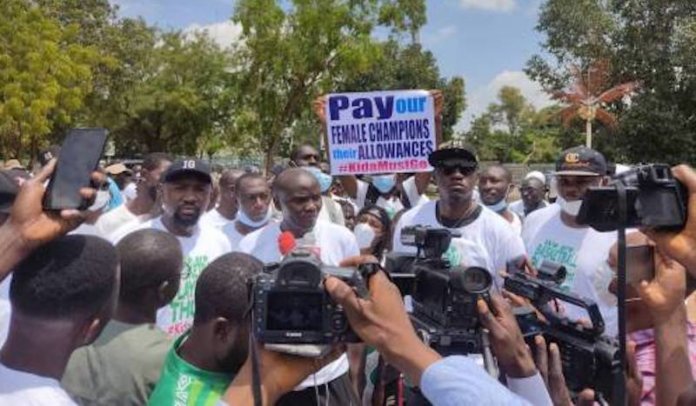 More crisis jolted the Nigeria Basketball Federation (NBBF) elective congress billed for October 30 as basket players yesterday staged a peaceful protest in Abuja against the choice of Benin and the candidacy of the former President of the federation, Ahmadu Musa Kida.
The protest, which was held at the Old Parade Ground featured prominent former national team players like Ejike Ugboaja, Stanley Gumut, SkamboMorrison and Igoche Mark.

Gumut spoke on behalf of the players. The newly elected players-representative prevailed on the Presidency, Ministry of Youth and Sports Development and Nigeria Olympic Committee (NOC) to intervene.

He insisted that the players who were the major stakeholders of the game would not have a voice if the elections were allowed to hold in Benin.
The players described the last four years of basketball under the stewardship of the Kida led board as sheer waste, saying the embattled president should be prevented from contesting the elections for his apparent lack of regard for the same players he is angling to govern.

They fumed that the choice of Benin was orchestrated to impose Kida on Nigerian basketball players, technical officials and other stakeholders, who in the past four years have not played competitive basketball in the country.

They also said they were uncomfortable with the calibre of the people aspiring to return to the board at all cost.

“The former president of the NBBF has no regard for the players and called them thugs at the last AGM. We are calling on the Presidency, Ministry of Youth and Sports, Nigeria Olympic Committee and whoever is in authority in the country to see that Nigeria’s basketball players are suffering and it was evident in the video on social media that our female team, who have been winning laurels for us have not been paid.
“We are calling on the government to intervene and get us an alternative venue to be able to elect the best leaders for ourselves. We don’t want a situation whereby they would force a leader who has in the last four years killed our local leagues and basketball in the country. We are calling on the Minister and NOC to call for an all-inclusive congress that will find a lasting solution to the crisis,” Gumut said.

The position was reinforced by the proprietor of Mark Mentor Basketball Club, Igoche Mark.
“I saw a video from the former president of the NBBF saying the local players are not good enough to play in the national team and that was the reason why they were not invited into the national team. For me, that is unfortunate. If I am not good today, the best thing is to encourage me to work hard, but the fact is that they (players from the domestic league) are not given the opportunity.
“Also, how can anybody explain that the female basketball team that has been winning laurels, back-to-back African champions three consecutive times has not been paid,” Mark queried.