APC Govs, NWC Fail to Agree on Campaign Kick off Date 12 mins ago 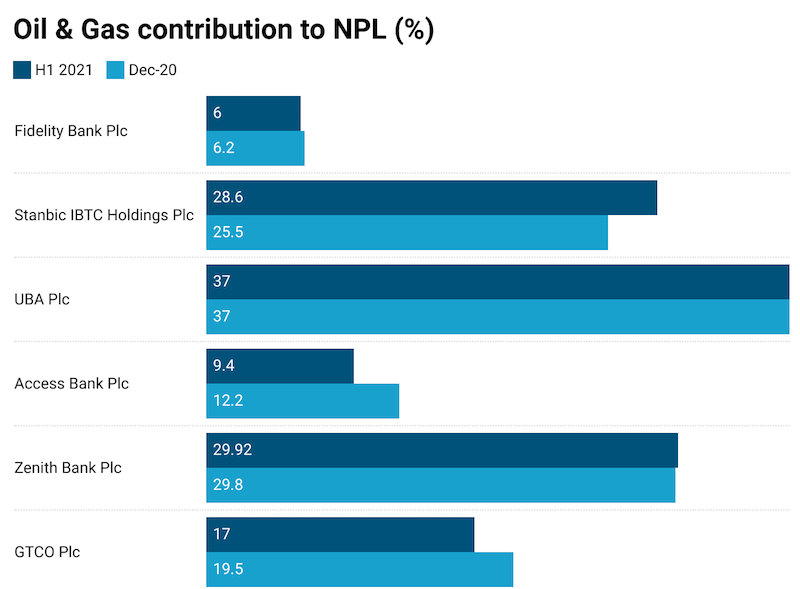 Darasimi Adebisi
Amid volatility and uncertainty in the global economy, the likes of Zenith Bank Plc, Guaranty Trust Holding Company (GTCO) Plc, and four other banks’ exposure to Oil & gas sector dropped by 6.3 per cent to N3.3 trillion in half year of 2021 from N3.11 trillion in 2020.

Analysis of the banks result showed that aside GTCO and Zenith Bank that recorded decline in Oil & gas exposure in the period, other banks this year increased exposure to Nigeria’s mainstay economy driver despite Government’s efforts at diversification into Agriculture and Mining.

The other banks are: United Bank for Africa plc (UBA), Access Bank Plc, Fidelity bank, and Stanbic IBTC Holdings Plc.
The National Bureau of Statistics (NBS) in second quarter of 2021 Gross Domestic Product (GDP) noted that real growth of the oil sector was –12.65 per cent (year-on-year) in Q2 2021 indicating a decrease of –6.02 per cent points relative to the growth rate recorded in the corresponding quarter of 2020.

“The Oil sector contributed 7.42per cent to total real GDP in Q2 2021, down from figures recorded in the corresponding period of 2020 and down compared to the preceding quarter, where it contributed 8.93 per cent and 9.25per cent respectively.”

With the global ease on COVID-19 lockdown, the performance of the Oil & gas sector witnessed steady increase to $73.60 as at June 30, 2021 from $51.35 per barrel, according to the Organization of the Petroleum Exporting Countries (OPEC).

The global oil prices had slump to around $12.41 per barrel in April 14, 2020 from $67.12 early last year as countries shutdown businesses to stop the spread of the virus.

In April 2020, the global prices turned negative for the first time after oil producers ran out of space to store the oversupply of crude left by the COVID-19 crisis, triggering an historic market collapse which left oil traders reeling.

Further findings by THISDAY revealed that banks operating in the country in half year of 2021 made huge loan provisions for Oil & gas sector as demanded by the Central Bank of Nigeria (CBN) prudential guidelines.

Analysts expressed that the market crash underlined the impact of the COVID-19 outbreak on oil demand as the global economy slumps and banks in first half of 2021 exposure to the sector was based on caution lending.
Our correspondent can report that aside GTCO and Zenith Bank that recorded decline, others recorded significant increase in Oil & gas exposure in the period under review.

GTCO’s gross loans by industry revealed that 28 per cent as at June 30, 2021 was exposure to upstream Oil & gas sector compared with 29 per cent in 2020 while exposure to midstream oil & gas remained flat at 14 per cent.

Zenith Bank in a statement had stated that: “Despite the prevailing macroeconomic headwinds in the period under review, Zenith bank remained resilient and delivered yet another superior financial performance, characterized by high-quality assets, robust earnings and Capital Adequacy Ratio (CAR). The bank regularly assesses it’s resilience to changes in micro and macro environments with specific actions to address any observed or anticipated challenges.

“The bank strongly believed it is well positioned to deal with liquidity risk and funding challenges that may arise from any adverse situations and our capital and earnings capacity (profitability) can withstand the shocks that may arise.”

The bank added that, “In 2021, the global economy looks set for a recovery with the rollout of vaccines, and growing confidence, driving an increase in economic activities across most economies. This has also driven an increase in crude oil prices, an improvement in interest rates and recovery from recession in Q4 2020 in the domestic economy.

“The Group is well-positioned to maximise the opportunities these recovering fundamentals represent while leveraging technology and expanding its retail footprints to deliver improved returns to all stakeholders.”

In addition, Fidelity Bank exposure to Oil & gas sector rose by 31 per cent to N411.52billion as at June 30, 2021 from N315.2billion in 2020 while Stanbic IBTC Holdings reported N201.09illion exposure to Oil & gas as at June 30, 2021 from N168.7billion in 2020.
An analyst believe banks are lending to old associates in the Oil & gas, stressing that the mainstream sector still has potential than other sectors in the nation’s economy.

According to him: “The high yield in the Oil & gas sector is attractive enough for banks to sustained investment. The only risk there is when price of crude oil remains low for 12 months. The price was down in 2020 due to COVID-19 pandemic. Since the discovery of the vaccine, it is expected that the price might increase this year. The pandemic created uncertainty in the sector last year and since the discovery of ways to tackle the virus, it led to economy reopening global and boost oil production and prices.”