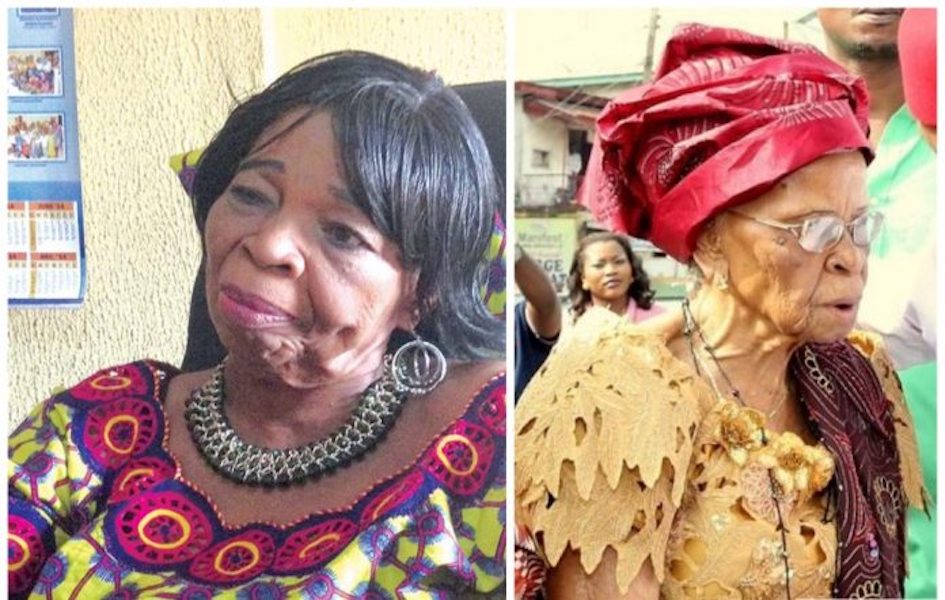 The two women, however, died barely 24 hours after apart.

The transition of Lady Ironsi was confirmed by her son, Ambassador Johnson Aguiyi Ironsi, who said the family would give full details of her death in due course.

Lady Ironsi had been a widow since July 29,1966, when her husband Gen. Johnson Thomas Aguiyi Ironsi, was assassinated in a counter-coup during an official visit to Ibadan.

But reactions have since trailed the passing of both women from leaders of the country in different walks of life.

President Muhammadu Buhari, in his message, extended deepest condolences to the Aguiyi-Ironsi family, and government and people of Abia State on the passing of Victoria Aguiyi-Ironsi and Lady Adanma Okpara.

President Buhari in two press releases issued on Monday by his Media Adviser, Femi Adesina, affirmed that Lady Victoria’s incredible strength and exceptional courage during one of the darkest moments in the nation’s history portrayed her as a mother of the nation, God-fearing and a foremost woman of valour.

He noted that the former First Lady would be remembered for laying a solid foundation for women’s leadership role in the seat of power and as a founding member of the Nigerian Army Officers’ Wives Association; she passionately championed the welfare and wellbeing of families of military officers.

The President recognised that 55 years after the death of General Aguiyi-Ironsi, Lady Victoria never stopped working for the greater good of Nigeria, and for peace, stability, healing and reconciliation in the land.

Buhari sincerely hoped that Lady Victoria’s labours for the country would not be in vain, and joined all Nigerians in praying for the repose of the soul of the departed and comfort for those who mourn.

While commiserating with family of the late Dr. Michael Okpara, over the demise of Lady Adanma Okpara, the president also joined the government and people of Abia State and all Nigerians in mourning the passing of an enterprising and disciplined mother, who was a worthy example of humility and hardwork to her children and the many women she mentored in her community.

President Buhari affirmed that the late wife of the very formidable figure in the First Republic and the Eastern Nigeria, led by example even after leaving public office.

The President said his prayers and thoughts were with the family members, friends and members of the Knight of John Wesley (KJW) in the Methodist Church Nigeria, who wouldgreatly miss her warmth, grace and depth of wisdom.

In a condolence message on behalf of his wife, Dame Patience Jonathan, and other members of his family to the Aguiyi-Ironsi family and the Government and people of Abia State, Jonathan noted that her passing on was a great loss to the nation, because of her place in Nigeria’s chequered journey of nationhood.

In the statement by Ikechukwu Eze, Jonathan’s former media Adviser, the former president described her as “a notable matriarch, who established herself as a totem of support and stability even in very challenging times in the nation’s history.”

“For a long time, after her husband’s unfortunate death in office, she conducted herself as a doyen of womanly dignity and honour in a manner that epitomised patriotism, courage, and compassion.

“She was indeed a devout woman, whose enormous sacrifices for the unity and progress of our nation will not be forgotten.”

Former Vice President of Nigeria, Alhaji Atiku Abubakar, has also commiserated with the family of the late Okpara on the demise of its matriarch, Lady Adanma.

Atiku said in a statement in Abuja on Monday, that even though Lady Okpara passed away at a ripe old age, death naturally diminishes collective humanity and comes with grief.

“I received the news of the death of your matriarch with mixed feelings. It is usually a saddening moment for me at the news of the demise of anyone at all; even though this one is at a very ripe old age. Death naturally diminishes humanity and the loss of one’s mother is very painful at any time”, Atiku was quoted as saying.

Governor of Abia State, Okezie Ikpeazu, said that he received the news Okpara’s death “with a heavy heart but with a deep sense of gratitude to the Almighty God for a very fulfilled life”.

In a statement signed by his secretary, Onyebuchi Ememanka, the Abia governor recalled that the late First Lady of Eastern Region was the backbone of her husband, who was premier between 1959 and 1966.

“Together, they gave the people of the old Eastern Region, a first class government, whose achievements continue to reverberate even till this day,” Ikpeazu said.

On his part, Senate Minority Leader, Senator Enyinnaya Abaribe, in his condolence message, said with the death of both Victoria Aguiyi Ironsi and Adanma Okpara, Nigeria and Abia State had lost two great women.

Abaribe, in a statement Monday by his Media Adviser, Uchenna Awom, said the death within a space of two days of the two great women marked a sad end of glorious era.

“I’m happy they lived a robust and very active life of service that is worthy of emulation and of course both of them raised good families and highly successful children, who are contributing very well in the development of our dear country and state of Abia. We are very proud of them and will sorely miss them,” Abaribe said.