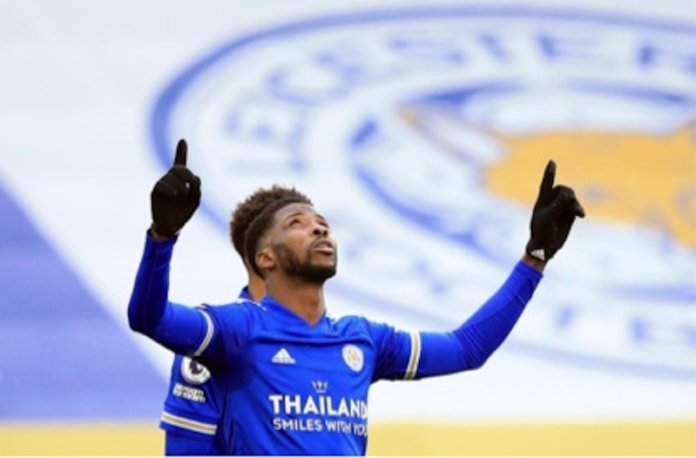 The Nigerian striker’s three goals in the month under review will compete alongside nine other goals shortlisted by the former Premiership champions with England forward, and top club striker, Jamie Vardy also in contention for the award.

The Nigerian forward dominates the nine-goal shortlist as his efforts against West Ham United, West Bromwich Albion and Crystal Palace are up for the monthly accolade.

Iheanacho, who scored a total of five goals in the period under review, aside Vardy, will have others like Timothy Castagne, U23 stars Tyrese Shade, Thanawat Suengchitthawon, Cole Dasilva and Leicester City Women’s Natasha Flint for the individual prize.

Last month, his goals also ranked him as the second most prolific attacker in Europe’s top five leagues with only his compatriot Simmy Nwankwo having more goals than him during this time.

Overall, Iheanacho boasts 18 goals in 36 appearances across all competitions in the on-going season.

The former Manchester City striker has been in terrific form this season after struggling in the past to establish himself in Brendan Rodgers’ squad following his move from Pep Guardiola side on a five-year contract in 2017, for a reported £25 million fee.

His goals have helped the King Power Stadium outfit to their current third spot on the Premier League standings having accrued 66 points from 35 outings, behind champions Manchester City and Manchester United.

“I think a lot of people wrote me off, but I never lost faith in myself,” the striker told BBC Sport Africa.

Having failed to score in the Foxes’ 2-1 defeat of Manchester United at Old Trafford on Tuesday, the Super Eagles star would be hoping to find the net when the King Power Stadium giants take on Thomas Tuchel’s Chelsea in Saturday’s FA Cup final at Wembley.