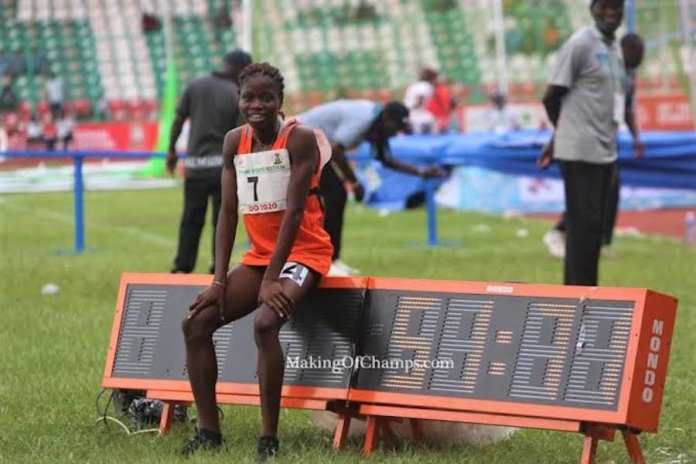 Nigerian quarter-miler, Imaobong Nse Uko, 17, has been listed as the youngest athlete to compete at the World Athletics Relays scheduled to hold in Silesia, Poland between May 1 and 2. Spain’s Angel David Rodriguez, who turns 41 later this month, is the oldest athlete entered for the competition.

Nigeria is to compete in five relay events that includes the men and women’s 4x100m and the 4x400m while the fifth event is the mixed relay.

Imaobong who is the former National Youth Games 400m queen with a 52.07 this season is to join the likes of Patience Okon-George, Uwemedino Akpan Abasiono, Opeyemi D. Oke, Glory Patrick and Osaretin Usembo in the women’s 4x400m relay team at the two-day relay fiesta in Poland.

In the men’s 4x100m relay event, Nigeria has forwarded the names of Enoch Adejoke, Alaba Akintola, Usheoritse Itsekiri, Jerry Jakpa, Divine Oduduru and Seye Ogunlewe to battle for the quartet to fly the country’s flag in the event.

As at Tuesday, 127 relay teams from 37 countries have put in their entries to be part of the relay fiesta.

Thompson-Herah, who is named on Jamaica’s 4x100m and 4x200m teams, will be making her third World Relays appearance.

She anchored Jamaica to 4x200m victory in 2017 in national record time, then finished third in the same event in 2019.

Maslak will aim to keep the Czech men’s 4x400m team in a qualifying position for the Tokyo Olympics.

They currently occupy the 16th and final spot in the list of provisional qualifiers for the Games, but a lane in the final in Silesia will secure their place in the Japanese capital.

Simbine, who has produced three sub-10-second performances already this year, will be reunited with two of his other South African 4x100m teammates from the World Athletics Championships Doha 2019.

Thando Dlodlo and Clarence Munyai joined Simbine in setting a national record of 37.65 in the heats before going on to finish fifth in the final.

In Doha they finished just 0.01 behind Brazil, winners of the 4x100m at the World Athletics Relays Yokohama 2019. Three members of that Brazilian sprint relay squad have been named for Silesia.

Several newly minted winners from the recent European Indoor Championships are slated to compete in Silesia. European indoor 400m champion Femke Bol leads a strong Dutch 4x400m team, which includes all of the women who contributed to their relay success indoors.

The newest addition to the World Athletics Series, the World Relays were held in the Bahamian capital of Nassau for the first three editions, while Japanese city of Yokohama hosted the fourth edition.

The 2021 World Relays will be used as a qualifying competition for relay teams aiming to compete at the World Athletics Championships Oregon 2021.

Bauchi Raises the Alarm over Influx of Bandits from Yobe