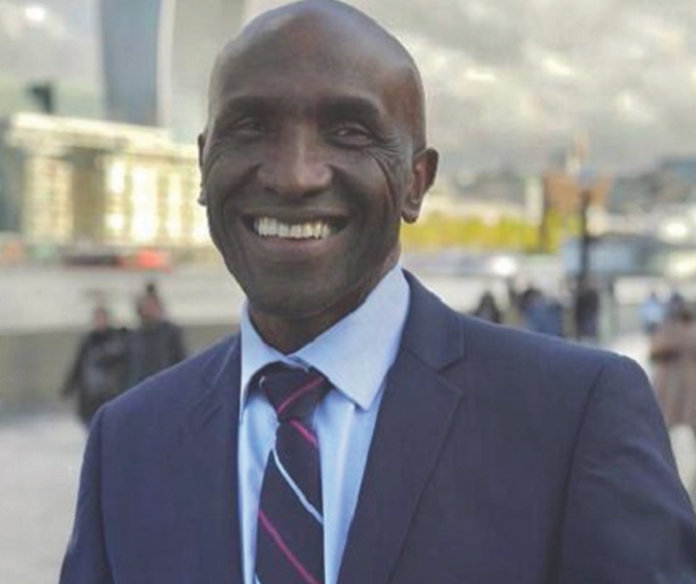 By the time London voters go to polls to elect the new Mayor of London on May 6, one of the candidates to that exalted seat, a British Nigerian , Nims Obunge will be counting on his campaign against violent crimes and his bridge building efforts in the last 30 years to get voters’ endorsement, reports Festus Akanbi

As 2021 London mayoral election gathers momentum, with all the candidates intensifying their campaigns, analysts said the chance of the incumbent Mayor, Sadiq Khan to carry the day is slim giving the rising profiles of other contenders. One of those jostling for the exalted seat is the Nigerian-born Nims Obunge, an independent candidate, who argues that the city of London has reached a dispensation when the destiny of the people should not be left at the mercy of politicians alone.
“I believe our city is now at a point where we can no longer afford to hand our destiny to politicians alone. Neither do I believe one political party has the answer to the many challenges we face,” he said as he takes his campaign to the grassroots.

Nims, the Community Activist
Nims Obunge is the senior pastor of Freedom’s Ark Church, in Bruce Grove, Tottenham, and well known among Nigerians and other black people in London, from his ministry and work with several faith organisations, government and voluntary agencies around curbing violent crime in the British capital. Obunge said while launching his bid for City Hall: “We invite Londoners, to be part of this historic movement as we step up together to secure London’s prosperous future. Be part of a campaign that makes London safe, affordable, and electric.”

Nims is not a newcomer in London public life. His efforts as a community activist had earned him the prestigious Member of British Empire (MBE), for leading the campaign against crime, especially his fight against gun and knife crime in London for the last 20 years. A force to be reckoned with in the community, Nims recently stepped aside as a Deputy Lieutenant for Her Majesty’s Lord-Lieutenant for Greater London.

Within a period of 30 years, Nims has succeeded in building bridges across London’s diverse communities and fighting the scourge of knife and gun crime across London. The charismatic pastor has proven to be a man of ideas. He started the Peace Alliance and initiated the London Week of Peace, the London Leadership and Peace Awards and many other projects to give a better future to young people and validate the roles of families in building integrated communities.
Amongst many other things, he also chaired the London Criminal Justice Partnership IAG. He played an active role in the financial service and educational sectors, educating and empowering families and individuals to be financially independent and entrepreneurial.

His Conversations with Electorate
Nims believes that London needs an Independent Mayor and a diverse London Assembly that will “work across the political divide; secure safety for our families and young people; unite our divided city; address poverty; promote a green London where prosperity and affordable living across London’s diverse communities can thrive.”

Asked to justify his entry into the political contest, Nims said, “I believe our city is now at a point where we can no longer afford to hand our destiny to politicians alone. Neither do I believe one political party has the answer to the many challenges we face. A collaborative effort is the only way we can see our city prosper.”

Explaining why he thinks he is best suited for the job, Nims who boast of an impeccable resume explains, “Over the last 30 years, I have served in different roles across London working as a financial adviser, faith leader (Freedom’s Ark), CEO of The Peace Alliance, governor of an FE college, and been a board member for different government agencies including the London Criminal Justice Partnership. I believe my experiences within London and my continued position as an advocate against violence in our streets and homes make me the ideal candidate to put Londoners’ priorities first.”

Speaking about his background, he said, “I was born in Kensington, London at St Mary Abbott’s Hospital to the late Sir Ambassador D D Obunge and Lady Emma Obunge. My father was a Nigerian ambassador and a career diplomat. I schooled in many of the countries he was sent to as a diplomat, including the UK, Sweden, Ireland and Italy, to name a few.

“I studied political science, intending to follow in my father’s footsteps and become an Ambassador but, alas, I‘ve done everything but that – from working as a manager in Wimpy Restaurants; a licensed Mortgage Advisor; being a youth and senior Pastor; starting and leading The Peace Alliance – a crime reduction and community cohesion charity – and now running to be the Mayor of London.”

Rising Violence in London
Explaining that his dream of calling the shot as a London Mayor was borne out of his worry over rising violence in the city of London, Nims said, “I am doing it for the right reasons. Over the last 20 or so years, I have buried many children whose lives were cut short by the sharp blade of a knife or the burning shot of a gun. Their families have been left traumatised, and politicians have failed time and time again to articulate – let alone implement – a lasting solution.

“The truth is, I believe that the future of London is too important to leave in the hands of the political parties and their internal policy fights. I have dedicated the last 20 years of my life to actively working on bringing peace to Londoners. It is a passion of mine.”
Sticking to his campaign of peace, Nims believes his efforts at the Peace Alliance will be an advantage.
He said, “My work at The Peace Alliance was all about peace in our communities; forging cohesion within those communities and, above all, ensuring that the future of our youth is secure.

“Over the last few years, I have seen an increase in knife-and-gun crime; the breakdown in communication between young people, police and the government and, what’s more, the government has not demonstrated a sustainable logical or strategic plan to resolve these issues. These are some of the reasons why I feel it is time for me to step up to be Mayor of this amazing city of ours. I don’t want to fail this generation.”

His link to Nigeria will not deter him. He believes he is at home in London. He said, I am a Londoner and I love this city. When I started The Peace Alliance 20 years ago in the borough of Haringey, I organised the Haringey Peace Awards, which eventually grew to become the London Leadership and Peace Awards. At this event, we celebrate many whose efforts help transform our city.”

Nims explained further that he also initiated an annual London Week of Peace, which involved over 500 collaborative events across every borough in London, including Londoners of all ages and backgrounds.
“I chaired the London Criminal Justice Partnership Advisory Board and the Metropolitan Police Operation Blunt response to knife crime, whilst also being a member of the Police Independent Advisory Board to gun crime and the London Crimestoppers Board. I am also a member of the Violent Crime Prevention Board for London. All of these – and much more – captures my passion for London’s safety,” he stated.

He told London voters that his past experiences have positioned him to respond to the challenges of poverty elevation, trafficking, knife crime, and educational and aspirational attainment. “I also have a strong strategic team that I believe will steer us in the right direction of being a safe, affordable, electric and prosperous city,” he stated.

Wealth of Experience
In all this, Nims believe he has an edge over other candidates. “I believe I offer London my many years of experience, a wealth of knowledge, and the passion to implement and achieve results. I run as an independent mayoral candidate, without the baggage of a political past.

“I believe Londoners are tired of being lied to and want something fresh, authentic and different. I have built significant relationships over the last 30 years, which we can leverage to make our city safe and prosperous. I offer Londoners something new, without discounting the strengths where necessary, for some of the old. I believe London needs to be run by practitioners and professionals at a time when politicians may have failed.”

We need to make London affordable, by creating innovative partnerships to fund a major drive for building homes for thousands of first-time buyers in London, and frontline key workers in the communities they serve at scale. We need to strengthen and reconnect communities through cultural hubs across London. We also need to make London electric, by championing for a new Green London and ensuring carbon neutrality by 2030. And finally, I offer a prosperous London, a London which drives entrepreneurship and opportunities for the most deprived, and actively promotes happiness and mental wellbeing.

Background
Obunge was born in Kensington, London in 1965, of Nigerian parents and his father, who is from Rivers State, was a career diplomat. This meant he spent his childhood in England, Sweden, Italy, Ireland and Nigeria. He attended the University of Jos, Nigeria before returning to the UK when he was 21. He became a pastor at 23 and is also a member of the Knife and Violent Crime Prevention Group. He chaired the London Criminal Justice Partnership Advisory Board and the Metropolitan Police Operation Blunt response to knife crime. He was a member of the Home Office Stop and Search Community Group, the Criminal Justice Partnership and the Metropolitan Police Stop and Search Scrutiny Panel.

Mayoral Election
The 2021 London mayoral election will hold on 6 May 2021. It will be held simultaneously with elections for the London Assembly and other local elections across England. The mayoral and Assembly elections were originally due to be held on 7 May 2020, but in March 2020 the government announced the election would be postponed until 2021 due to the COVID-19 pandemic.
The mayor of London has responsibilities covering policing, transport, housing, planning, economic development, arts, culture and the environment. They control a budget of around £17 billion per year. Mayors are typically elected for a period of four years, with no limit to the number of terms served.