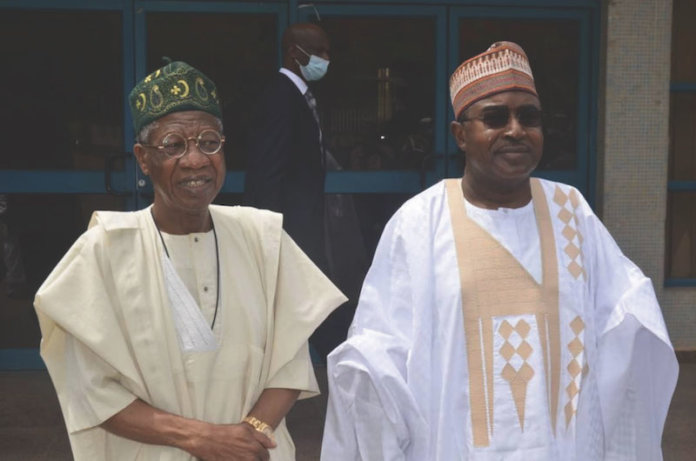 Less than three months in the saddle as Chairman/ Chief Executive of the National Drug Law Enforcement Agency, NDLEA, the facts and figures on arrests of drug traffickers, seizures and prosecutions speak volumes about the vigour and passion Gen. Mohamed Buba Marwa (Retd) has brought into one of the most dangerous wars being fought by countries against drug cartels across the world.

This much was revealed in his remarks while on an advocacy visit to the Minister of Information and Culture, Alhaji Lai Mohammed on Thursday in Abuja.

Marwa said: “It gladdens my heart to inform the Hon. Minister that despite our constraints, we have in less than three months in the saddle, been able to seize drugs and cash worth over N75 billion, with the arrest of 2,175 drug traffickers and the seizure of 2,050,766.33 kilogrammes of assorted illicit drugs as well as the filing of about 2,000 drug cases in court with 329 convictions and 1,549 pending cases in court.

“These figures are less than what could have been on the streets destroying the lives of innocent youths, our women and men. With the support of your office and those of your agencies, we’ll be able to save millions of Nigerians from being afflicted with the menace of drug abuse.”

Having achieved this feat in such a short time in office under the agency’s new maxim of “offensive action”, it’s obvious Marwa is out to push for another win but this time a massive advocacy campaign that will save over 180 million Nigerians from falling into the drug abuse ring and equally save those already afflicted by the menace.
Without mincing words, he opened up on how he intends to pursue the advocacy phase of the battle. The NDLEA boss said: “Recently, through intelligence based operations, we were able to arrest some drug traffickers; one a Nigerien and another a Chadian in Niger state and Taraba state respectively, who supplied illicit drugs to insurgents and bandits.

“As much as we’re disrupting their drug supply chain through law enforcement, we also need to work hard on our drug demand reduction through advocacy programmes, which are mostly publicity driven. This visit therefore is to leverage on the Hon Minister’s position to drive our advocacy programmes at little or no cost because it’s an open secret that NDLEA has over the years been left behind in terms of funding among other law enforcement agencies including those established years after us.

“For instance, we need to run a weekly 30 minutes network programme on NTA and Radio Nigeria to reach Nigerians on the dangers of drug abuse; we need to reach those at the grassroots with our messages in various Nigerian languages packaged in jingles and others. We don’t have the resources to pay for all of these and this is why we need partnership with the Ministry of Information and its agencies to be able to reach millions of Nigerians and save them from the drug scourge.”

And here, he finds an ally in the Minister, Lai Mohammed, who commended Marwa for his string of achievements, very impressive achievements, in the less than three months after he assumed office.
The minister said: “These achievements, I am reliably informed, include restoring the visibility of the NDLEA for local and international partnership; boosting the morale and confidence of staffers; attracting international support and ‘’offensive action’’ against drug cartels that has led to the arrest of 2,175 drug traffickers, seizure of 2,050,765.33 kilogrammes of illicit drugs as well as cash and drug seizures worth N75 billion.”
According to the minister, “the war against illicit drugs and tackling drug trafficking is one of the most important tasks in our country today: “This is because drug trafficking, money laundering by traffickers and the use of illicit drugs are closely linked to the nation’s security, well being of the citizens, the moral fabric of our society and even governance. It is common knowledge that drug money can be used to finance insurgency and terrorism. A successful fight against drug trafficking will therefore help to deny or reduce funding for insurgency.

“The kind of vicious banditry and kidnapping for ransom that our country has witnessed in recent times cannot be totally separated from illicit drug use and their effects on users who take to crime. Drug trafficking proceeds are sometimes ingested into legitimate businesses, making hard working and honest people look indolent.
“What about the effect of drug trafficking on the moral fabric of the society. This society rarely questions the source or sources of people’s wealth. That’s why drug traffickers end up becoming role models in the society, with devastating consequences for our young ones. Even governance is not spared. Drug traffickers and money launderers contest and win elections into high offices, where they help shape policy. Just imagine the damage this can do to governance and indeed to any nation. “This is why I want to once against commend Gen. Marwa for raising the bar in the fight against drug cartels and the use of illicit drugs with the new maximum offensive action.’’

After the commendation comes the alliance and push for advocacy to reach millions of Nigerians on the risks of abusing or trafficking illicit drugs and ultimately save the youths, men and women from the pangs of the scourge.
The Information minister said: “The Federal Ministry of Information and Culture will work with you to give maximum publicity to your activities, especially in the area of advocacy. To date, we have launched a number of national campaigns. It will not be a bad idea for the Ministry, working with the NDLEA, to launch a national campaign against drug trafficking and use of illicit drugs.
“I will also encourage the NDLEA to work with the National Orientation Agency (NOA), which has set up Integrity Clubs in Secondary Schools nationwide, to reach the young ones with its campaign against drug use”, the Minister submitted, giving a strong indication that another phase of the campaign against the drug war may be in the offing.”