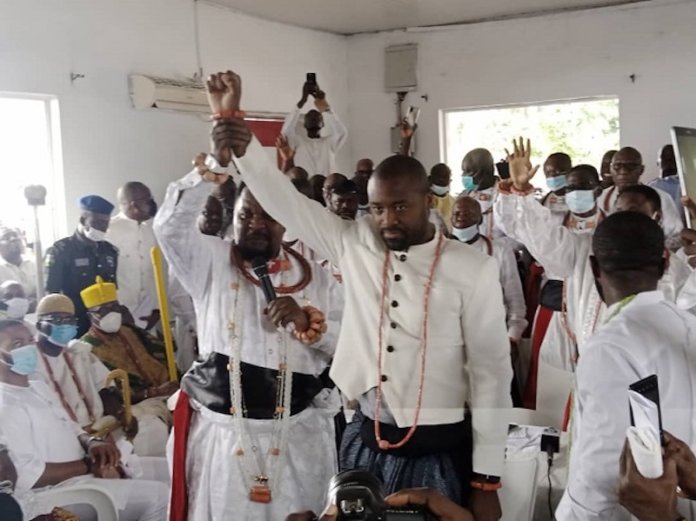 A pall of controversy enveloped the announcement yesterday of the demise of the Olu of Warri, Ogiame Ikenwoli, and the appointment of his successor, Prince Tsola Emiko.
The announcement made by the Iyatsere of Warri Kingdom and acting Chairman of Olu’s Advisory Council, Chief Johnson Atserunleghe, at a traditional ceremony in Ode Itsekiri, the homestead of the Itsekiri was immediately opposed by the Ologbotsere of Warri Kingdom, Chief Ayiri Emami, who contended that there had been a breach of law.

Ikenwoli was the 20th Olu and Emiko would be the 21st monarch of the kingdom.
Atserunleghe’s declarations were followed by 20 cannon shots signifying that 20 Olus had reigned so far.
The Iyatsere also pronounced a mourning period of three lunar months throughout the Itsekiri nation during which there shall be no drumming, dancing or merrymaking of any kind anywhere while all Itsekiri sons and daughters must tie their wrapper upside down for the duration of the mourning period.

The announcement, which was witnessed by two monarchs, Olubosin of Ifetedo, Oba Akinola Aderera; and Ore of Otun-Ekiti representing the Ooni of Ife, Oba Adekunle Adeagbo; and another monarch from the Benin kingdom, has put to rest the controversy surrounding the death of the monarch.

Atserunleghe made the announcement by symbolically breaking three earthen (native pots) containing white chalks, one after the other on the floor accompanied by 20 cannon shots, which signified that the 20th Olu’s reign over Iwere land had ended.

He subsequently announced and presented Emiko as the Olu-designate, which was accompanied by a wild ovation from Itsekiri sons and daughters present at the event.
Atserunleghe also announced that the Itsekiri people would be in a mourning mood for the next three months till the burial rite of the late monarch is concluded.

“All Itsekiri adults, both males and females will put their clothes upside down throughout this period of mourning. No party, no drumming or merriment of any sort in Itsekiri land until the burial is over and new Olu installed,” he said.

Emiko, who will remain Olu-designate until all necessary process are completed, will be formally crowned as the 21st Olu of Warri at a later date.
The Olu-designate was born on April 2, 1984, to Prince Godwin Toritseju Emiko, the late Ogiame Atuwatse, and Gladys Durorike Emiko in Warri, Delta State.

He holds a Bachelor of Arts degree, majoring in International Studies and Political Science.
He also holds a Masters degree in Management.
However, the announcement by the Iyatsere on the key developments in the kingdom prompted a swift reaction from Emami, who declared that the action of Atserunleghe could not stand, citing legal document to justify his claim.

According to the Emami, the reported emergence of Emiko is illegal, null and void.
While calling for calm among Itsekiri sons and daughters as well as concerned Nigerians, Emami insisted that Ikenwoli had not yet joined his ancestors and, therefore, a successor to the throne could not be announced.
He noted that the responsibility for such announcement rested squarely on his shoulders as the Ologbotsere of Warri, warning that the revered stool of Itsekiri Kingdom was not up for sale to the highest bidder.

Emami claimed that only two out of the seven Itsekiri traditional kingmakers were present at the ceremony held at Ode-Itsekiri, the ancestral home of the Itsekiri people in Warri South Local Government Area of Delta State.

Moreover, the Ologbotsere argued that the edict outlining the process and procedure for making public the demise of an Itsekiri monarch, vis-â-vis the selection of an Om’oba or Olu-designate is duly gazetted.
In a statement countering what transpired at Ode-Itsekiri earlier, Emami said: “I don’t support illegality. You don’t buy Itsekiri custom and tradition; the throne comes to you. I’m not part of what is going on there; it’s an illegality and that is why I am not there.
“The Olu has not joined his ancestors. As far as I am concerned, whatever was done today at Ode-Itsekiri was a kangaroo in search of power.

“Out of seven, it was only two kingmakers that were there at Ode-Itsekiri. I am urging Itsekiri, and indeed all Nigerians, to remain calm. Itsekiri will announce their king when the time comes. Emami as the Ologbotsere of Warri will never support illegality in any form,” he said.

Signs of cracks in the fold of the Itsekiri council of chiefs emerged several weeks ago when news that the first class traditional ruler had joined his ancestors amid speculation about the possible cause of death, a piece of information which those conversant with such customary matters considered rather hasty.
The council of chiefs promptly denied the news, which had already gone viral and was widely published by many frontline national newspapers in Nigeria, including THISDAY.

Nevertheless, the apparent division among the chiefs took a dramatic turn barely a week ago with the reported suspension of a high-ranking chief, Emami, allegedly by a section of the body of senior chiefs.
The said suspension was shortly faulted publicly by another influential group said to comprise offspring of a preceding Olu, the late Erejuwa II, who claimed that those who announced the suspension of the businessman and influential Itsekiri titleholder lacked such powers.

The ensuing intrigues have apparently snowballed into the current counterclaims over succession to the throne of the Itsekiri king, the Olu of Warri with Emami raising legal issues and insisting that the entire process could not proceed further without him so long as he holds the position of Ologbotsere of Itsekiri Kingdom.
Nevertheless, by the announcement of Emiko as the Olu-designate, a three-month mourning period in Itsekiri Nation had commenced with burials, marriage ceremonies and other social activities banned until his crowning as the substantive, 21st Olu of Warri or Iwere Kingdom.