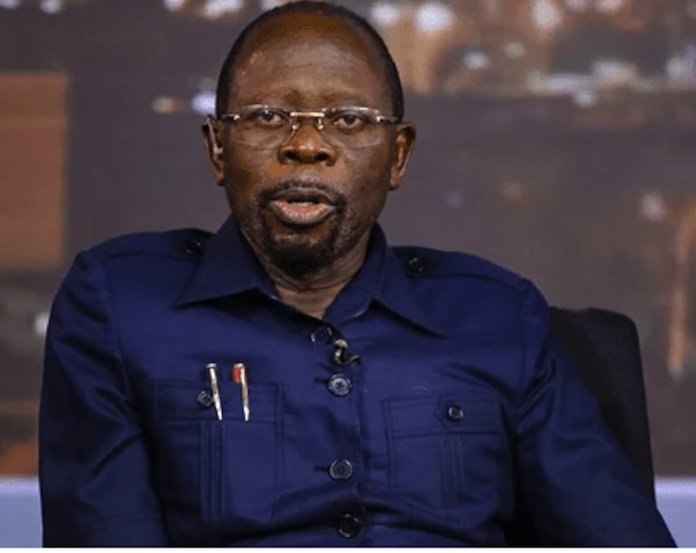 President Muhammadu Buhari has felicitated with the former National Chairman of the ruling All Progressives Congress (APC), Comrade Adams Oshiomhole as he marks his 69th birthday anniversary and urged the former two-time Governor of Edo State to eschew politics of division and acrimony.

Buhari has also extolled the virtues of the late civil society leader, Mr. Innocent Chukwuma, saying he was a credible voice of transparency who died when the nation needed his services most.

The President, in a congratulatory message issued yesterday by his Media Assistant, Malam Garba Shehu, urged Oshiomhole to eschew politics of division and acrimony while rededicating his life to working for the prosperity of those in need.

He also charged Oshiomhole to build bridges among people of diverse backgrounds and faith, and also inspire others to be patriotic.

The President joined family, friends and well-wishers around the country to celebrate the former President of the Nigeria Labour Congress (NLC) while thanking God for his life of service to the nation, good health and opportunity to commemorate this special day.

In another development, Buhari has also extolled the virtues of the late civil society leader, Innocent Chukwuma, describing him as a credible voice of transparency who died when the nation needed his services most.

The President, in a condolence message issued also issued yesterday by his Media Assistant, Shehu, stressed that Chukwuma’s demise would be badly felt due to his great contributions to Nigeria’s efforts to ensure transparency and good governance under the current democratic system.

He said the late activist would be remembered for his remarkable record and dedication to the cause of good governance, transparency and accountability in Africa.

Buhari also extended his heartfelt condolences to Chukwuma’s family and the civil society organisations in the country, and prayed God to grant the soul of the departed eternal rest and comfort for all who mourn.

He noted that Chukwuma was working actively with the present administration through the civil society organisation, CLEEN Foundation, to monitor the spending of the last tranche of $311million repatriated funds recovered from the late Head of State, Gen. Sani Abacha.