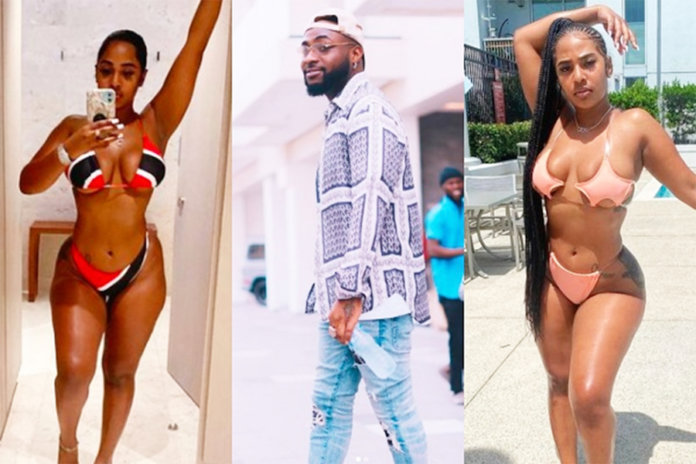 “@Mima_Gif: Na Davido wey cheat, na Chioma Dey trend,” “@TarzanZEEZ: Assurance was on fire that year. Chioma really enjoyed it. She will definitely enjoy the endurance too.” @ajehswag simply wrote: “It was Peruzzi that wrote assurance. So technically, Davido wasn’t the one that promised Chioma assurance.” The hit song, “Assurance” by Davido was dedicated to his fiancée Chioma in 2018 and vowed to always love her. Visuals of the song also featured the young lady.

Hilarious tweets so to say as they appear. And in thousands they poured in as several intimate pictures of Nigerian pop star Davido and his new-found love Mya Yafai set Twitter on fire last Tuesday. In the viral photos, Davido and Mya, who is rapper Young M.A’s ex-girlfriend, were pictured getting cozy, including one where they are seen sharing a French kiss. The music star, who is currently in the US, was also seen plastering a soft kiss on Mya’s cheek in another picture. As indicated by the pictures, the two were no doubt completely happy to be in the company of each other.

Although the pictures have sparked thousands of reactions on social media, some fans and followers have argued that the pictures could be from a video shoot, others disagree and insinuate he is cheating, asking the Risky crooner the state of the “assurance” he gave Chioma, his fiancée.

There are also some who believe the two (Davido and Mya) were just goofing as that’s how stars do, like the saying goes. Davido like other fellow music stars in the industry is known to get extra cuddly with female models on video shoots, especially if it is what the video director has requested.

As expected, with the hot takes and thousands of comments and reactions that sparked up on social media, his third baby mama and fiancée’s name, Chioma will pop-up. There have been speculations about the strained relationship between Davido, and the mother of his first son, Chioma Rowland. Recall the award-winning artiste was first linked with the 22-year-old American Instagram model and actress as they stepped out for an event in Sint Maarten, a small Island in the Carribean, which is part of the Kingdom of Netherlands.

Shortly after the video went viral, it was revealed that the new girl, who previously dated American rapper, Katorah Hortense Marrero, professionally known as Young MA, (Mya is apparently a bisexual) visited Davido in Nigeria last December and also spent some time with him in Ghana in January. During that time, Ghanaian music star Stonebwoy shot the video of his song, “Activate” with Davido. Mya testified that she enjoyed herself as she wrote on Instagram: “I Love you Africa”.

A video on her Instagram page froze some of her experiences, including a boat cruise on the Lagoon and a drive round the upscale locale on Lagos Island. In the video shared on Instagram by Mya, she was spotted having fun with Davido and his crew, flew in his private jet and also had his song “Holy Ground”, in which he featured Nicki Minaj, playing in the background. It is believed that ‘Holy Ground’ was written for Mya because it defined all about her physique and her tattoos. Mya Yafai is of a mixed-race background – Trinidad & Tobago and Yemen.

She is a radio presenter and model based in Atlanta Georgia, where she was born in 1998. Davido was born in Atlanta and owns a house there. She currently has over 200,000 Instagram followers and more than 4,000 subscribers on her YouTube Channel. Mya’s Instagram is filled with photos of her vacationing in different parts of the world, from Puerto Rico to Dubai, to Jamaica and many other places.

Davido is having countless relationships with other women aside his current fiancé, Chioma Rowland. To many, it appears ‘OBO’ as he’s fondly called has turned Chioma into another baby mama, after being spotted in December with Mya. Davido and Chioma, after a family introduction in September 2019, were expected to get married last year, but the plan was upended by the COVID-19 pandemic. The singer in an interview said the wedding would happen this year. But various reports said the ceremony may not happen again.

Since the Davido/Mya video made it to the internet, social media was agog, especially Twitter, as many wondered if Davido is still engaged to his partner. Davido and Chioma have long been a ‘goals’ relationship for many on Twitter, but fans aren’t so sure anymore.

Rumours of a split between the pair have been around for months now, after Chioma reportedly stopped wearing her engagement ring. Neither parties spoke on the rumours, leaving fans unsure of their relationship status. Apparently confirming the split, Chioma deleted her photos with Davido on her IG page days after reports of his romance with Mya made headlines, leaving a post to a link on her page that has Davido’s ‘A Better Time’ album cover which features him and their son.