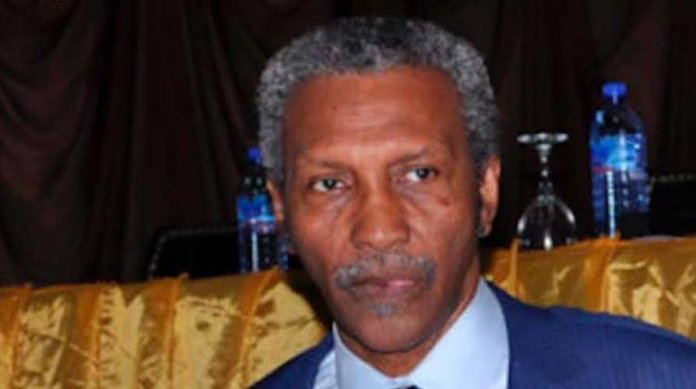 The valedictory court session held in honour of Justice Olabode Rhodes-Vivour last week Monday was not all about encomiums and merriment, but an opportunity for him to provide tips that will enhance not only Nigeria’s jurisprudence, but help in justice delivery. Davidson Iriekpen writes

After serving a total of 27 years as a judge of the three levels of court, 11 of which was at the Supreme Court, Justice Olabode Rhodes-Vivour last week Monday, bowed out after a colourful valedictory court session held in his honour at the apex court.

The ceremony, which had all the justices of the Supreme Court in attendance, including the Chief Justice of the Nigeria (CJN), Justice Ibrahim Tanko Muhammad, also had judges of other courts, senior and junior lawyers and some public officials uch as the Governor of Osun State, Adegboyega Oyetola and his Edo State counterpart, Godwin Obaseki.

Virtually everybody who spoke at the event had one good thing to say about Justice Rhodes-Vivour who ended his 45 years of legal career, 27 years of which he spent as a judge, either in the course of his journey or conduct on the bench or for the sound judgments he delivered from the High Court to the Supreme Court.

The CJN, Justice Muhammad, led the praises, particularly extolled Justice Rhodes-Vivour’s virtue, describing him as an “affable brother Justice,” who diligently and meticulously offered unquantifiable services to Nigeria and humanity.

He added: “We are all here today to felicitate with an accomplished jurisprudential iconoclast that has offered the best of his intellect to the advancement of the legal profession through his several years of inimitable adjudications. His Lordship is a rare gem and unblemished symbol of humility and piety. His proficiency in the dispensation of justice, which is anchored on his mastery of the law, presents him as a man of honour and scholarship.

“His judgments are not only incisive but also analytical and opulent by all standards. His robust contributions to the development of our jurisprudence are inviolable and fascinating. His impeccable attention to details in every matter before him is alluring and salutary as well,” Justice Muhammad said.

Justice Muhammad added that Justice Rhodes-Vivour “has diligently and meticulously offered unquantifiable services to his fatherland and the generality of humanity in different capacities for several decades. He is physically energetic and never gets frightened by any form of challenges that may confront him. His amiable disposition and reticent outlook have literally made him a gentile tiger in the temple of justice.”

The Attorney-General of the Federation (AGF), Abubakar Malami, who was represented by the Permanent Secretary, Federal Ministry of Justice, Dayo Apata, said the retired jurist “demonstrated the virtues of focus, patience and hard-work in handling al the undertakings in which he found himself a participant.”

He added that as result of this, the retired judge was “conferred with the prestigious National Merit Award of the Commander of the Federal Republic of Nigeria, as a mark of his renowned fame and excellence.”

On his part, a representative of the Body of Senior Advocate of Nigeria (SAN), Adegboyega Awomolo, said Justice Rhodes-Vivour “worked patiently with humility, climbed the ladders of ranks in the Ministry of Justice in Lagos State” till he reached “the zenith of judicial career as a Justice of the Supreme Court of Nigeria.”

But the ceremony was not all about encomiums and merriment, as it provided the eminent retired jurist the opportunity to provide some tips that if implemented would not only enhance Nigeria’s jurisprudence, but enrich justice delivery for litigants.

First, he blew the lead in the agitation for the Supreme Court to jettison its doctrine of precedent or stare decisis. This is a situation where the court tenaciously and jealously guide and guard its previous decisions no matter the amount of fresh evidence, saying it cannot reserve itself. He advised that this doctrine should be done away with as it denies litigants justice.

Justice Rhodes-Vivour stated that there are some precedents that are clearly out of date, and should no longer be followed. He contended that the precedents no longer make sense anymore and are out dated should be laid to rest.

“The Supreme Court has held on several occasions that it is absolutely bound by the doctrine of precedent or stare decisis. That in effect means: ‘Stand by your decisions and the decisions of your predecessors, however wrong they are and whatever injustice they inflict.’

Second, the retired judge amended his previous pronouncement that human rights can be suspended whenever national security is threatened. He delivered the lead judgment as a judge of the Court of Appeal in the case involving former leader of Niger Delta militant groups, Asari Dokubo, in 2006. In the lead judgment, he denied bail to Dokubo on the grounds that he constituted a threat to national security. The Supreme Court, in a decision delivered on June 6, 2007, upheld the judgment by also denying Dokubo, bail.

Incidentally, the judge who delivered the lead judgment of the apex court over 12 years ago is now the current CJN, Justice Tanko Muhammad, seated at his left hand side. The Muhammadu Buhari administration has adopted the judgment as justification for the continued detention of even persons that have been granted bail by courts.

While reviewing his opinion about the judgment at the occasion last Monday, the retired judge said no one’s right should be denied unless national security “is visibly threatened,” a departure from his previously held view that such rights can be threatened even with “real likelihood” of a threat to national security.

He argued that no one should be deprived of his rights on the whims and fancy of anyone on authority.

He said: “In Dokubo-Asari v FRN (2006) 11NWLR (Pt. 991) p324, as a judgment of the Court of Appeal, I said that: ‘When national security is threatened or there is real likelihood of it being threatened, human rights or the individual rights must be subjected or well taken care of. National security must be visibly threatened before anyone can be denied his rights. No one should be denied his rights on the whims and fancy of anyone in authority.”

On how to improve on election petitions and justice for litigants in the country, he suggested that due to the difficulty petitioners encounter in proving electoral fraud, the Electoral Act should be amended to put the burden of proving the legitimacy of an election on the Independent National Electoral Commission (INEC), and urged the National Assembly to amend the electoral laws to shift the burden of proving the credibility of any disputed elections to INEC rather than the petitioner.

He expressed displeasure at the increasing reliance on the courts to resolve election disputes, noting that electoral disputes were protracted because some politicians are never satisfied with the result announced by the electoral umpire.

He said, “Elections in Nigeria are protracted. The stakes are too high. Consequently most elections are usually resolved by courts, simply because most politiians are never satisfied with the results announced by the regulatory body charged with the conduct of elections (INEC).”

He recalled his previous opinion in Udom v Umana 2016 case where he stated that the petitioner “is always saddled with “difficult requirements and procedures.”

He said there was the need to reduce the menace of corruption to the barest minimum to make life more meaningful for the citizenry. He cited Genesis 6:12 of the Bible to back his argument that “corruption exists in all the countries of the earth”, including Nigeria, but added that what should be done quickly “is to reduce it drastically” through the building of “credible and transparent systems.”

“I am of the view that certain convicts should be allowed to serve their prison terms only after their appeals are exhausted,” he said, adding that the reason “being that some convicts serve several years in prison before their appeals are heard and decided.”

“Their appeal may be found to be meritorious. They are then released. No companies paid for the time spend in prison,” he said.

“In Eze & 147 ors v Gov Abia State & 2 ors (2014) 5-7SC (Pt.1) p.171. On Section 7(1) of the Constitution I said that: “On a careful reading of the above it becomes clear that it is the duty of the Governors to ensure that the system of Local Government continues unhindered. Dissolving Local Government Councils and replacing them with caretaker committees amounts to the Governor acting on his whims and fancies unknown to our laws, clearly illegal. It is the duty of the governor to ensure their existence rather than being responsible for destroying them. It amounts to executive recklessness for the governor to remove from office democratically elected chairmen and councillors under whatever guise. It is illegal and wrong.”

He further called for urgent reforms of Nigeria’s Limitation Laws as has been done in the United Kingdom, saying it requires an urgency that makes delay an accessory. He dvocated that judges should be conferred with discretion to extend limitation periods when it is just and equitable to do so.

This was the basis of his judgment in JES Investment Ltd v Brawal Lere Ltd & ors (2010) 18 NWLR (Pt.1225) p.495 where he said: “There has been no reform of Limitation Laws in Nigeria. The general Limitation periods for some actions are too short. Judges should be conferred with discretion to extend Limitation periods when it is just and equitable to do so. Actions that readily come to mind are sexual abuse cases. The victims are usually too traumatised, under intolerable pressure, grief stricken and depressed for long periods. Consequently, when they eventually regain their composure, it is too late to file action in court, because of the short limitation periods provided by the law. This also applies to personal injury cases. Injuries that occur in a factory. The victim is usually a poor factory worker drawn into endless negotiation by a boss much aware of the Limitation period. Time to file action runs out, when the poor factory worker realises he has been taken for a ride. He has a cause of action but sadly one that cannot be enforced.”