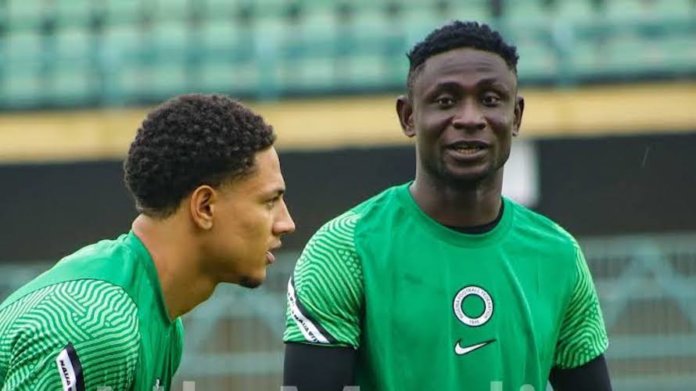 Enyimba FC goalkeeper, John Noble, has said that his call up to the senior national team by Super Eagles Head Coach, Gernot Rohr, is the best moment of his short career as a shot stopper.

Noble is one of the three home-based players invited by the Franco-German tactician for the last two AFCON 2021 qualifying matches against Benin Republic and Lesotho to be rounded up tonight with the fixture against the Crocodiles at the Teslim Balogun Stadium in Lagos.

Ahead of the match , the lanky goalkeeper is in contention for the goal saving job alongside Russia 2018 World cup keeper, Francis Uzoho of APOEL Nicosia, Cyprus and Maduka Okoye of Sparta Rotterdam in The Netherlands.

However, Noble is also wishing his first cap for the national team comes through today.

With the AFCON ticket already in the kitty, coach Rohr may just decide to field a largely bunch of ‘fringe’ players and this could be an opportunity for the rising star who sees former Nigerian stopper and captain, Vincent Enyeama, as his role model while coming up.

“It’s a dream come through to be in the national team. I want to compete among others in the same role and I’m delighted that we are one big happy family here.

“All of them here (in camp) are really encouraging us to develop and this alone is a take home for me and a message to other players in the domestic league that we can reach the top of our career,” he pointed out.

The keeper also eulogised Enyeama, whom he sees as a role model, although he has never met him one-on-one till date.

“As a young lad in the street, while many adored the likes of Austin Jay Jay Okocha, Nwankwo Kanu and many other star players of their respective generations, my own idol is Enyeama.

“I admired his calmness in goal and ability in organising his defence line and interestingly I have his clips with me as well, he was an Enyimba FC goalie too.

“When I signed for Enyimba, the Chairman of the club told me that it was from this club that Enyeama moved to the national team. I wanted the same path of glory too and God has done it for me,” he concluded.