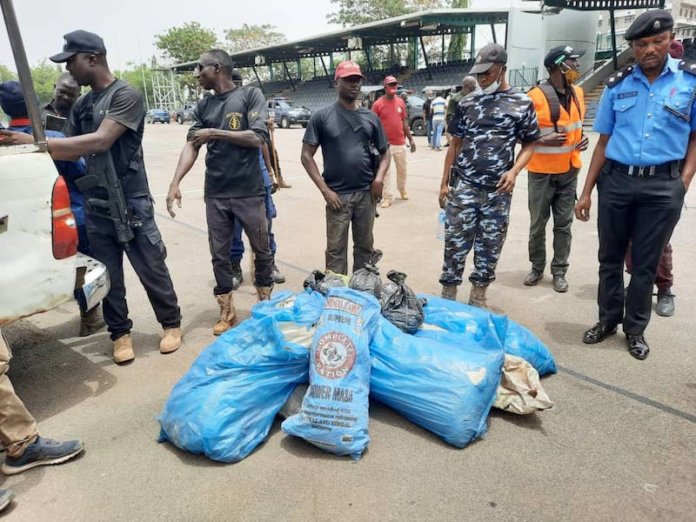 Hard drugs suspected to be cannabis as well as some arms carefully concealed in the ground in seven bags were discovered when the army, police and local vigilante group joined the Federal Capital Territory Administration (FCTA) to raid some slums in Wuye District and Jabi over the weekend.

The action was to flush out criminals responsible the escalation of kidnapping in the FCT. Several suspects were arrested during the exercise.

The Director, Security Services FCTA, Adamu Gwary, said the raid was authorised following a report that criminals, constituting nuisance to the society, were hiding in the areas.

An army unit from the Presidential Brigade of Guards accompanied other security operatives when the FCTA Development and Control, Abuja Environmental Protection Board (AEPB), Abuja Metropolitan Management Council (AMMC) and Abuja Parks and Recreation raided the slums in Jabi and DakiBiyu area of Wuye District of Abuja.

Some of the criminals opened fire upon sighting the security agent in Jabi.

Gwary said the arrested suspects had been handed over to the FCT Police Command for prosecution, while the seized cache of Indian Hemp had also been handed over as exhibit to the National Drug Law Enforcement Agency (NDLEA).

He said: “We addressed the areas at the fringes of Jabi and Wuye District when we received a report. You can see the quantity of drugs uncovered during operation. We visited the shanties that are within the forest between Jabi and Wuye district, where such shanties were removed. Large quantity of weeds, found to be Indian hemp, was discovered. You can also see the way and manner at which such drugs were concealed in many bags. It presupposes that such shanties are not only covering the activities of the petty criminals but drug barons. The NDLEA, which the exhibits were handed over to, will weigh it and give their own reports, which will generally be put together and inform the administration.”

The director of security also addressed the problem of undeveloped plots of land and abandoned buildings used as cover for criminals in the territory. He said at a recent FCT security committee meeting, both the AMMC and Development Control as the city managers, were mandated to enumerate the property without further delay and take the necessary procedures against those who fail to develop or refuse to develop their allocated property.